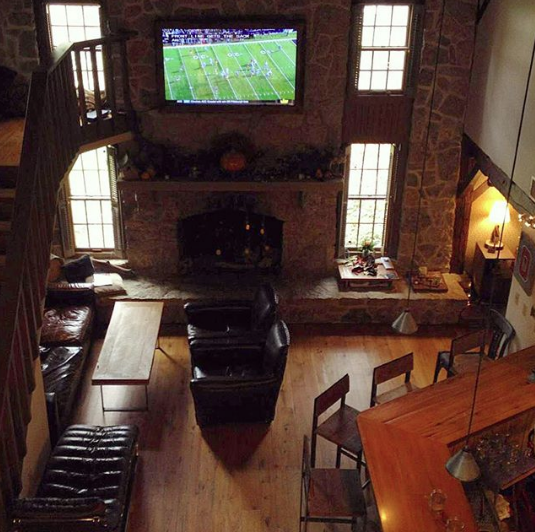 Hovelled in a non-descript storefront in the outer reaches of Clintonville, a man covered in ink wearing a rugged, wooly beard receives me with a smirk. His shop is roughly the size of a spacious closet—leather goods and motorcycle memorabilia ornament the walls with workmanship.

Ryan Moya, owner, crafter, and entrepreneur, started a business because he could.

“I have no background in leather-working. I started doing this three or four years ago as a hobby and DIY project,” he said.

While much of the world carries on with the ritualistic monotony of office life, Moya is in his basement—cutting, stamping, dying, and stitching his own line of leather goods from a big piece of cowhide. He will craft it down into smaller pieces that will be peddled online and from his hyper-intimate 160-square-foot retail space.

“I cut it, dye it, rivet it, and stamp it all by hand,” Moya said. “I finally got a legit sewing machine, which is nice for some things, but most of the items I still like to stitch by hand.”

The genesis of the Clawkeeper concept was that it was a way for Moya to avoid paying top dollar for leather goods, as well as to fulfill a niche that he saw in Columbus and beyond.

“I ride motorcycles and wanted to have some cool leather bags and stuff like that I wouldn’t actually be able to buy, so I started buying materials to make it,” he said. “Through social media, I was able to share that with other people. Then I kind of expanded my product lines to key-keepers, belts, and wallets. Most of it really was trial and error.”

What separates Clawkeeper from other leather outfitters is the genuine artistry that goes into his craft. He doesn’t have a laser etcher or an assembly line pumping out identical products. The rugged imperfections attract the community to his work.

“I think every craft and artist has their own personal touch,” Moya said. “Most of my products are pretty simple in their design, but I think that because everything is made by hand, and individually, nothing will be the same cut every time. That kind of thing adds character. I am not marketing towards high fashion. I like dirty, gritty kind of stuff, from the music I listen to, to riding choppers, and to the partying I do, and a lot of that comes out in the pieces—rugged leather that is built really nice and has a quality that won’t come out in an assembly line. These are things that you just won’t get unless you understand the culture.”

You don’t have to be a Hell’s Angel to appreciate Moya’s work. His art is accessible to anyone who enjoys leather products or finds a connection with handmade goods.

“It’s interesting because people are attracted to leather products, whether they are a dirty biker or a fashion ambassador,” he said. “I am experimenting with who I am trying to reach out to. But ultimately, I am making it because I like to make it, and that shows in the product.”

Moya’s rugged, tumbledown tunes can be heard from all corners of Columbus if you know where to find him. (He has a degree from Berklee College of Music and shreds in local band The Black Antler). But what he appreciates about Clawkeeper is that it is a tangible product that he is able to share with the community, one that gives him the ability to customize according to demand.

“My leather products are something I can share with other people,” he said. “It’s not like writing music or painting, where I can share it, but there is only one and it is only mine, so I got really into the custom leather design. People would come to me with an idea that they want that I have never made before. So that was the thrill for me, I get to do the design aspect, and then build it with my hands.”

So, if you happen to be in Clintonville, check out Moya and his cozy storefront—if you are lucky enough to catch him. If not, chances are he is doing what he does best—creating something beautiful with his bare hands.