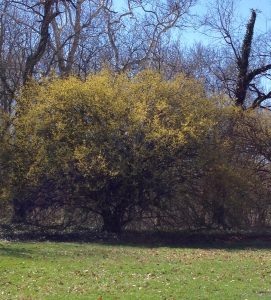 So what about punk these days?

“It’s so weird and diluted,” Nervosas drummer Nick Schuld says from the porch of the “Sunglasses Hut,” Schuld’s nicknamed home that doubles as the band’s practice space and studio. “I’m sure the people who were older were pissed and annoyed with ‘us’ and ‘our’ version of punk—whatever that was—in 1987. I do feel like that there was just that Green Day point when punk became a ‘sound.’ I do feel sad for people who have grown up after that. When I was a kid, punk was everything. It was so many different things and it was fun and funny. No one should say punk anymore. Like since 1980, no one can agree as to what the f*ck it means, so why even use it?”

To be fair, most of our conversation didn’t dwell on some kind of existential defining of punk. The trio, which includes bassist Jeff Kleinman and guitarist Mickey Marie, make it known there are far more pressing matters to discuss, such as having a back-up cassette of Steve Miller’s Greatest Hits ready for the van or the joy of driving through “sketchy little meth towns” in Oregon on their upcoming tour. Still, when Schuld jokingly states that “starting bands after 2000 is lame,” it’s hard not to discuss the state of modern music and Nervosas’ role in that world.

What’s most important today is the release of Nervosas’ second self-titled record coming this month. For what is the band’s strongest declaration to date, they’ve signed on with the venerable Portland-based Dirtnap Records. Besides being the farm league for stalwart Sub Pop, Dirtnap has defined certain new parameters for where punk can go, beginning with the power-pop leanings of the Exploding Hearts and onto similar-yet-singular records by Radioactivity and Bad Sports. It’s a perfect fit for the record as Nervosas tend to challenge the punk ideal at every turn. Even with the greater distribution and a wider scope (they’re playing Europe for the first time in September), the rise has done little to stifle the group’s vehement DIY aesthetic.

“No one should say punk anymore … no one can agree as to what the f*ck it means, so why even use it?”

“If you look at a Nervosas record, you know that Nervosas did that,” Schuld says about any hypothetical compromises that could be made with the signing to Dirtnap. “Exponentially more things get out of your control, sure, and you are adding people to that process, but at the end of the day, no one’s going to look at your record and say it is the label’s responsibility. It’s the band’s responsibility.”

If anything, the recent ascension has bolstered their vision and focus. The album is the sound of both aggression and sublimity, coiled white-hot tension and icy catharsis. Kleinman’s affected chants are urgent, nihilistic, yet underlined with the hope of creation and revolution, meanwhile Marie’s kaleidoscopic and chaotic guitar lines add a color in strict contrast to their stoic, monochrome battery. Songs like “Moral Panic” and the surging anthem “Industry” are embedded with the DNA of post-punk, hardcore, and a bit of goth, in particular recalling bands including the Wipers, Wire, and Dead Moon—all artists who also somewhat shunned any traditional “punk” affiliations.

Schuld’s encyclopedic knowledge of Columbus music is the spiritual anchor for Nervosas. He’s played drums for countless heavy-hitters through the years, but has found a permanent home behind the kit with Kleinman and Marie, and it’s there he feeds the band with a steady diet of mixtapes, war stories, and history lessons … what to do and what not to do in a band. It’s sage wisdom leveled with a rational philosophy on the cyclical quality of the Columbus scene.

“You’re not going to get famous in Columbus. There’s not one slot for one Columbus band to get famous every year. There’s nothing,” Schuld says. “So you just do it, and everyone are assholes, so you try harder to not sound like anyone else.”

And you tour as much as humanly possible. Nervosas have been road warriors on the house-show circuit since their inception in 2011, playing everywhere and anywhere that will have them, be that a basement in Vancouver with three-inches of water and no PA, or the oasis that is Minot, North Dakota. Those endless miles logged provide the trio with a badge of honor—a perseverance and credibility few bands in Columbus can replicate. The reality that they are just about to embark on another month out west brings the idea of comfort into question.

“I feel like when you tour a lot your home life becomes unstable,” Marie says. “You can’t keep a regular job, your boyfriend or girlfriend hates it, and you’re broke. But when you go on tour, everything is predictable and you know what’s going to happen. You’re going to play a show, you’re going to hang out with friends, hopefully score a clean place to stay and get in the van the next day. At least for me, when we go on tour I don’t have the anxiety of wondering about what I’m going to do with my life.”

Whatever you want to call Nervosas, be it punk or not-punk, one thing they are not: slackers. •