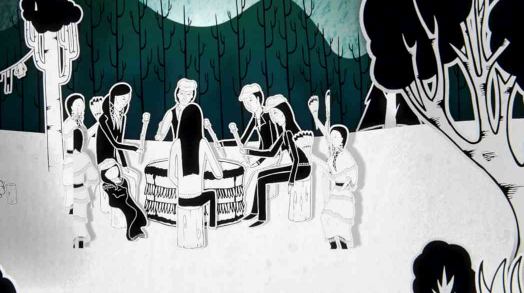 Affections
Written and directed by Bridey Elliott. U.S.A., 16 minutes.
This comedy about isolation and loneliness follows a young woman who is adrift and seeking intimacy in the most unlikely places.

Edmond
Short Film Jury Award: Animation, Presented by YouTube
Written and directed by Nina Gantz. United Kingdom, 9 minutes.
Edmond’s impulse to love and be close to others is strong—maybe too strong. As he stands by a lake contemplating his options, he reflects on his defining moments in search of the origin of his desires.

Jungle
Written and directed by Asantewaa Prempeh. U.S.A., 13 minutes.
The lines between trust, betrayal, and forgiveness are intertwined for two Senegalese vendors as they try to make a living on the streets of New York City.

The Grandfather Drum
Written and directed by Michelle Derosier. Canada, 13 minutes.
As the balance of the world turns upside down for the Anishinabek people, the elder Naamowin builds a healing drum to save his grandson and his people.