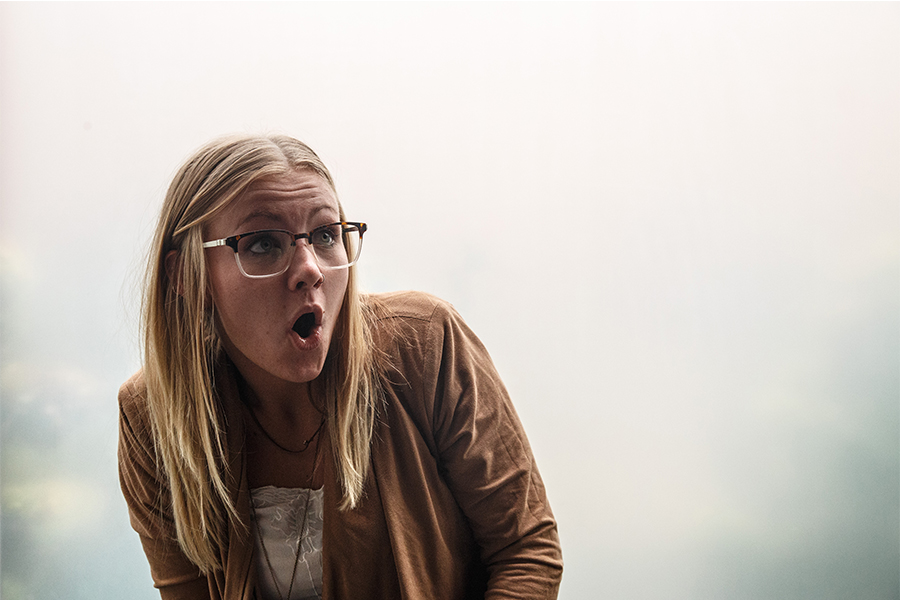 Heaven on a Bun

That day, in my grandmother’s living room with Scream on the screen, was the day I became obsessed with fear.

I love the rush of scared but knowing that I’m not in danger of bodily harm….a second-hand fear junky if you will.

But in the spirit of Halloween and seeing that I’m now 23, it’s high time that I volunteer my physical safety in order to deal with my consternations.

This month, for (614), I cast myself as the star of my own personal horror movie.

With the help of local professionals and business owners, I was able to come face to face with my fear of dolls, bugs, and ghosts. Here’s what happened…

Listen, I know dolls aren’t alive, however…..What about the horribly mangled Barbies in Small Soldier? What was stopping my Barbies from rising from their sardine-like state in the clear tupperware container beneath my bed, prying open the lid, and torturing me—all while “Communication Breakdown” by Led Zeppelin plays in the background?

These are the things that kept me up at night as a young girl and admittedly, into my adult life. So you can imagine my terror when I walked through the doors of the Mid-Ohio Historical Museum and was met by thousands of unblinking, glass eyes.

I was also met by Henrietta Pfeifer, director, and her assistant Sharon Marion. They were quick to dismiss my fears of dolls.

“As a matter of fact, it makes me very unhappy when people use dolls and make them into something evil,” said Henrietta. “They’re fabulous; they’re history.”

“What about at night when–”

“They don’t come alive and even if they do, they’ll be my friend,” Sharon said matter of factly.

Each of the women cared deeply for each and every doll in the nine-room museum—many of which they had personally mended back to health.

Which brings us to the doll hospital where Sharon is the resident doctor.

There were boxes labeled “eyeballs,” some labeled “hair.” Surfaces were littered with headless dolls, loose abdomen, sharp tools. They even have an oxygen mask for the dolls needing intensive care. Fabulous …

Where in the hell was I? The women didn’t skip a beat. They giggled, pulling out hideous looking dolls, saying things like, “She’s going to look gorgeous one day.”

As the women told the stories of these dolls—referring to each as “she,” “her,”—my nerves eased a little.

I still kept an eye over my shoulder during the beginning of the tour of the museum, fully expecting to catch a marionette Tiny Tim swiveling it’s head towards me.

But as we continued to walk through the centuries-old toys, my tormented thoughts all but dissipated. Likwwe Henrietta said when we first met, dolls are history and the Mid Ohio Historical Museum was their hall of fame.

With their impressive vaults of knowledge, both Henrietta and Sharon are able to transport guests back to each doll’s origin and guide them through their colorful histories—all the way from the 16th century to Barbie’s spoiled lifestyle.

I’ll admit, there will still be times in my life when I’ll see a doll’s delicately painted features and wait for a lip to twitch, revealing razor sharp canines. But I’m hopeful my experience at the museum helped ease my anxiety of one day meeting my demise at the hands of a porcelain monster.

Bugs don’t even have brains but they still freak me out.

Oddly enough, I had an insect collecting growing up. As I tend to do with things I’m scared of, I kept a safe distance; nets to trap them, gloves to retrieve them, plastic bags to enclose them, glass to display them.

But in the name of journalism and Halloween, I zoomed in.

First up, beetles..shiny, black, medium in size. Struck by initial nerves and the horrible feeling of it’s jagged legs clenching my fingertips, I kinda wigged out.

On to the 3.5” millipede. I wasn’t about to run out and buy one as a pet—it’s legs felt like creepy velcro against my skin—but it was tolerable.

Then of course, there was the hissing cockroach. Big–almost the size of my palm. It had a black and dark red exterior with an almost industrial undercarriage of barbed legs. As if it were letting off angry steam, it hissed each time someone stroked its back. No thanks.

And finally, the grand mama of all bugs; the tarantula. Her name was Debbie Hairy and she was about two decades old.. To my disbelief, she was entirely docile. As I invitingly laid my hand down, she retracted her legs and shielded her face–a defense mechanism. At this, I “Aww”’ed. Who was I becoming?

Similar to  the dolls, once bugs are given pronouns other than “it,” they become easier to empathize with. Learning about their behavior helps too.

George Keeny, an entomologist at Ohio State University, who so kindly let me borrow his bugs for the day, admits he used to get the “willies.” He has since grown out of that.

“Fear cannot stand against knowledge is my credo now,” he said.

He probably would’ve called me a “drama queen” had he sat in on my play date with the critters but hey, I faced my fear and lived to tell the tale.

The Historic Buxton Inn has been operating since 1812 making it the oldest and longest running business in Granville.

The first time I visited, I had heard two separate paranormal accounts before I had finished even one red velvet martini.

I believe in spirits that linger after death but I’ve never had an experience of my own. The thought both excited and terrified me. That was my cue.

Just like John Cusack in 1408, I wanted to get my ass haunted.

I was staying in Room 7, one of the allegedly haunted units. This room, along with 9 are the centerpieces of many strange stories told by guests. People say the Inn’s first owners, Major Buxton and his Lady in Blue, dedicated their lives to the Inn and it became their final resting place. Many debate their causes of death but few dispute that their spirits remain.

I asked the night attendant if she had ever had an experience of the paranormal kind while working there. She hadn’t but added, “They’re here though.”

She escorted me to my room and closed the door behind her. I walked over and turned the lock, knowing full well that if there was anything to be scared of, it was already inside my room.

I took careful note of how many bulbs were burned out in the bedside lamp; two. I mentally recorded the state in which I left the doors before going to sleep; closet closed, door leading to adjacent room slightly ajar. I let the light from the next room spill into my sleeping chambers. Horror Movie 101: Never subject yourself to total darkness or death will surely ensue.

I also made sure to keep my eyes in the mirror during my nightly hygiene regime. I wasn’t about to get a face full of glass courtesy of a murderous monster who appeared behind me in the split second I redirected my gaze (see any scary movie ever made).

After one last check in the closet and a few pages of Truman Capote’s In Cold Blood, I drifted off to sleep.

When I woke, everything was just as I had left it. If a ghosts had visited me in the night, they had done so quietly.

Staying in a haunted room all by my lonesome was exhilarating but I’m thankful it didn’t escalate. The Buxton General Manager Jennifer Valenzuela assures that ghosts are nothing to fear but tell that to my pores that burst with perspiration each time the mini fridge kicked on throughout the night.

Was I scared? Yes. Did I levitate to the ceiling? Maybe. Did I make it out alive? Absolutely.

Until next time, Major Buxton.

Many say humans are born with only two innate fears; falling and loud noises. The other things that torment us are learned. Whether your fear is as irrational of an animatronic Chucky doll coming to chop you up (I’m not scared, you’re scared) or as understandable as public speaking, use this Halloween season to face them. You may even conquer a thing or two.