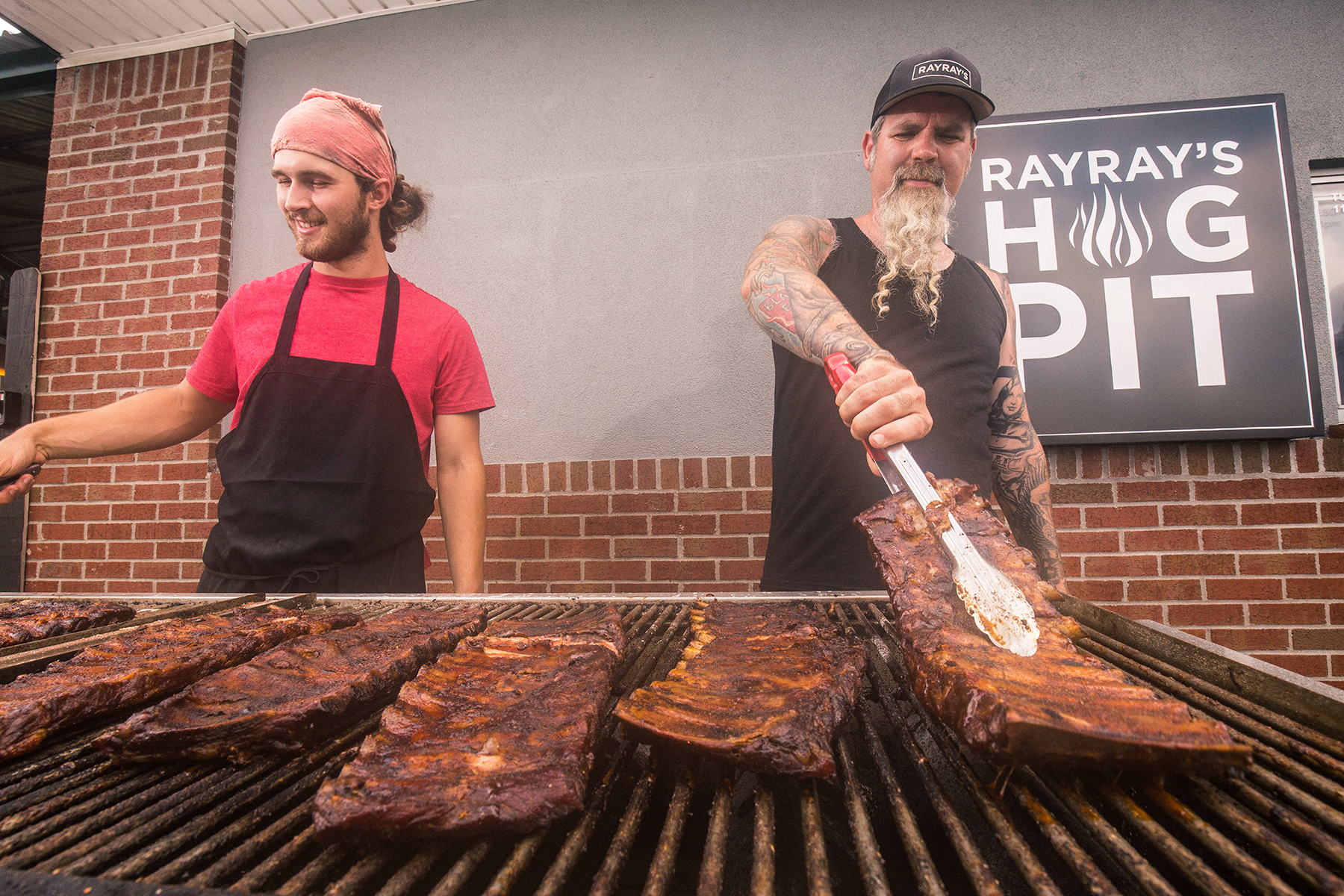 A mentor of mine once said that the worst place to open a coffee shop was in the same spot where another had gone out of business. Sure, you could probably quantify the failure of foot traffic or demographics. But ultimately, the place is still cursed.

With Ray Ray’s there is no scorched earth—only burnt ends.

After all the market analysis that could go into finding the right balance of random and regular clientele, there are really only two kinds of barbecue—you want it, or you don’t.

“I can’t fail here. It didn’t even cross my mind,” explained a defiant James Anderson, owner of Ray Ray’s Hog Pit whose reclusive and recursive alter-ego opened a surprise second location in Westerville in the same space that used to be The Barbeque Shack. “Now if it was a new market like Cleveland or Cincinnati, I’d be nervous. But I know Columbus, and people know me.”

Despite personally knowing Anderson and his demanding attention to detail for nearly two decades, the stakes are higher than they may seem. So much so, I found myself struggling to sleep the night before—still staring at the ceiling well past midnight amid the anxious anticipation of impossible expectations. (Jiro dreams of sushi. I dream of barbecue.)

With his wiry white beard and unmistakable attire, he’s practically become the Santa Claus of smoked meat, working throughout the night to bring barbecue to good boys and girls at a massive scale with magical precision. Like all legendary reputations, it was hard to earn and remains challenging to maintain.

“We turned down all growth opportunities for the past five years to focus on the brand. We wanted to do it slowly, to make sure our processes were in place, that our purveyors were doing their jobs well,” Anderson said with assurance. “But when this spot became available, the whole package was too good to turn down.”

The new spot isn’t entirely obvious for an undercover barbecue pit. Situated in the middle of a shopping plaza on the northeast corner of Maxtown Road and Route 3, it seems like an unlikely spot compared to the perfect food truck parking lot they’ve called home beside Ace of Cups.

But look closer. It’s more than just a failed drive-thru espresso bar and a patch of grass at the far end of the Home Depot parking lot. That’s essentially the local hardware store—and there’s a bank, a grocery, a pharmacy, even a factory right across the road. What looks like suburbia almost perfectly mimics the mix of businesses found in any old small-town square—and Ray Ray’s is right in the middle of it.

There’s really no bad place to sell barbecue—save maybe outside a petting zoo. Though there are certainly better places, and Anderson decided this one had all the right ingredients.

“Barbecue should be served outdoors,” he noted. “I’m lost in this little corporate world, and they’re starving for independents up here.”

Anderson is anything but corporate, but his gut instincts are tempered by informed intuition. The original location has been the unlikely launch pad for various culinary collaborations that seem to be everywhere you turn. From a signature pie at Mikey’s Late Night Slice and the spin-off success of the Hungarian Butcher, to a Franklinton barbecue throwdown, and a one-off event last month at Land-Grant, the best innovators are collaborators and Anderson’s orbit has already reached well beyond Clintonville.

“There are some culinary things I’d like to do that I can’t do with Ray Ray’s. But there will be a time to get those things out,” he hinted coyly, and cautiously. “I don’t want to bring that here. We’re still keeping this street level.”

Anderson knows his brand, and anyone who thinks barbecue is just swine, Cheerwine, and a bunch of picnic tables oversimplifies the cultural complexity that comes with any expansion of a beloved business.

“We have a lot of room for growth, that’s why we put in two smokers. We can do catering here, and now we have that capacity. But we don’t want to spread ourselves too thin by doing things we don’t do,” he noted with a nod to the empty stage that used to host bands under the former owner. “We’re not a live music venue, we’re not a bar. If you do all of those other things, your quality suffers. Simple works. I think our customers respect that.”

Westerville patrons may recognize some familiar faces. To ensure the new Ray Ray’s matched more than just the menu, Anderson split his existing team in half, then hired at both locations.

“Barbeque is an art that you’re constantly teaching someone else. So whatever they do also represents me,” he explained.

Though training new staff at both locations sounds inherently risky, it’s certainly not the craziest idea, and he’s heard his share over the years.

“Franchising… I’ve been getting that offer once a week for years. We have a grocery store that’s been hounding us to put pre-made, wrapped Ray Ray’s sandwiches in their stores. That’s f*cking crazy,” he said, shaking his head at the prospect of taking something hot and fresh and making it old and cold. “I would lose all of my credibility.”

Columbus is a city built on reputations, which is why Anderson isn’t concerned about eating into his own customer base by opening a second location. Folks already come from Michigan and Kentucky to stand in line. That isn’t likely to change. Connoisseurs, farther still—like one renowned barbecue critic who recently traveled from Texas to see what all the fuss was about.

“The national critics will often give you a heads-up, but sometimes they want to sneak in and get the real deal,” he explained. “We recognized him and talked for a couple of hours. Then he flew back a week later and came to the farm to see my Mangalitsa-Red Wattle cross, and I did a hog roast just for him.”

Even with expectations that epic, there’s no accounting for the weather. Ray Ray’s had their share of rain opening week, but it didn’t seem to dampen business or deter his faithful following. The extra hours of operation also helped to smooth things out.

“Now that we’re in a building, we should follow different rules. We’re open six days here instead of four, and an hour earlier,” Anderson noted. “We almost doubled our projection for the first week. Even with the rain, we still killed it. But we have to keep that momentum. If our month two and month three sales are the same or better than our first month, then we’ll know it’s the right spot.