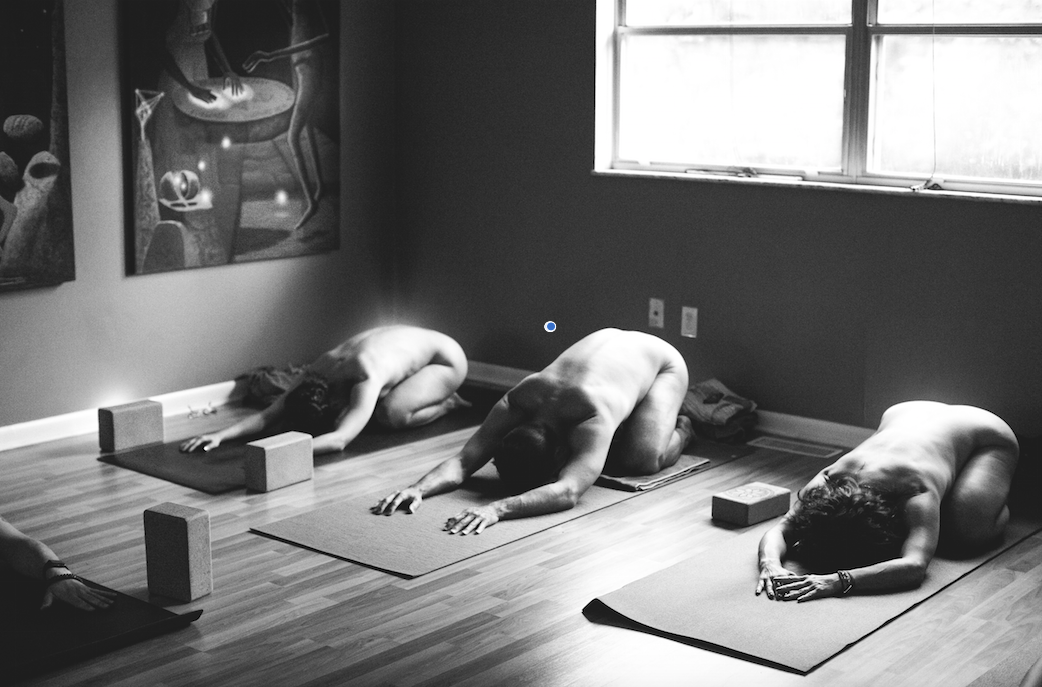 There it is in black and white, on the schedule for classes:

I share an office with my editor, and many of our conversations begin with me spinning around in my chair and exclaiming some off-base idea to him, and gauging his reaction. This time, he peers over his monitor, eyes wide.

My heart rate speeds up. I’m the open-minded, adventurous type… the “confident in my body type” type. This should be no sweat.

Sweat… is it hot in here?

Wait, am I sweating?

“If you’re not comfortable,” my editor says, “it’s okay, someone else will probably—”

“No!” I pull my gaze out of space to stare him in the eye.

Aaron King wants me to find my power.

And it may be hidden under layers of clothing—but there’s only one way to find out for sure.

At the Dharma House yoga collective on the north side, King offers myriad classes, from meditation to yoga, for every skill level.

This includes practice in the nude, which it turns out, is an ancient tradition. The first yogis practiced naked or in simple loincloths, focused on their inner-power and fine-tuning their moral compass.

I schedule a photographer to get images for the article.

I need to make an appointment to get waxed.

I tell everyone in the office and several friends about the class—partly so I can’t back out. I go to the Dharma House website over and over, reading through their page of FAQs. Maybe I’ll find some new tidbit.

Speaking of tidbits— can I wear underwear?

Yoga was first practiced between 5-10,000 years ago in South Asia. Most masters of the practice at that time were older men. The stretching and bending we’re familiar with are only a small part of an otherwise life-encompassing practice. Ancient yogis would bury themselves in the earth for 30 days, slowing down their metabolic rates. They were the OGs of “mind over matter,” and they dedicated their lives to living with power and purpose. Fast-forward to modern America: Google image search yoga, and you’ll find that our Western vision of it is worlds away from its roots. The people in the photos are overwhelmingly young, slender, female, well-dressed, and white.

I google “Should I bleach my anus?”

I go with no. Sounds risky.

I decide that I will not drink alcohol before the class. That’s too easy. That would turn off the animal part of my brain that would feel exposed and afraid, and that’s exactly what I want to confront. I also decide to take the co-ed class. Dharma House offers men- and women-only nude classes, in addition to two co-ed nude classes. An all-women’s class would feel like a chill locker room to me. Bring in some danglers, however, and I’ve officially stepped outside of my comfort zone.

Additionally, I plan to complete my post-class interviews in the nude. Why cover back up and converse in past tense?

I silently remind myself to exfoliate.

I start telling people just to see their reactions. They range from enthusiasm to horror to,

“What does your boyfriend think about this?”

I also e-mail my photographer. I’ve never met her in person, and I have to ask her to shoot the class in the nude.

I take note of a few covert negative reactions that seem more tied to my specific physical body than to the idea of nudity in general.

My decision to take this class becomes more defiant as the days pass.

The class scheduled, the photographer booked, all that was left to do was research for my interview and stew in my own anxiety juices. King spent some time on the phone with me, discussing the article. Turns out, there has been a little press on his nude practice, but none of the writers ever actually attended the class. So much for intrepid journalism.

Usually for an article involving exercise, I’d be looking for some cool, neon and black getup that would look “athleisure-y,” but professional. But I realize that this class is about only your physical body, your mental state. I spend the time I would have been scrambling for clothes to just think about where my head’s at.

When I arrive, I’m agitated.

I can’t unclench my jaw, or stop thinking about a dumb argument from the day before. I can’t even step out of my own never-ending brain loop. The back deck of Dharma House looks out over a wooded ravine. It’s a place of contemplation. One can hear rain on the leaves, and the rushing of a creek below. If there’s a place to get naked with strangers in Columbus, it’s here.

And yet, I’m thoroughly pissed?

I’m not mad about the naked yoga class I’m about to be a part of—I’m not even thinking about that. My brain is too full of irritation. Maybe this is a defense mechanism. Maybe my brain is focusing on other things in order to ignore thoroughly the task at hand.

I am managing small talk with two instructors, but all I can think about are the scars on my back from a bout with melanoma a few years ago. And how far apart my feet can be while my thighs are still smooshed together.

King started Dharma House after a time of tumult in his life. A former marine with a prison sentence and a divorce on his shoulders, he needed to center himself and find peace. After teaching yoga around the city, he created a communal practice and study space built of his own holistic vision. Dharma House offers classes built on a mind-body connection—this isn’t yoga for weight loss, this is yoga for life.

People know there is a journalist here.

They glance my way kindly. All I want to do is disappear into the wall paper.

The candles are lit and placed near the walls. I have visions of nakedly bursting into flames. I add hair ties to the list of things I wish I was wearing.

I sit on my mat in my knee-length dress, trying to put my legs demurely to the side. I realize the futility and finally sit cross-legged.

In a calming voice, the instructor invites us to disrobe. I train my eyes on the middle distance as I hear garments hitting the floor. I tug on one sleeve, and snake an arm inside of my dress next to my side. Then I pull the other one in. A momentary cocoon. I pause. I’m stalling.

My heart is racing. I’m usually a jump-into-the-pool-all-at-once kind of person. With a sharp breath, I pull my dress off. This is a big deal to no one but me. I realize that I’m less worried about people looking at me than I am about looking at other people and making them feel uncomfortable.

Here I am, world.

In all my birthday-suited glory.

The first few poses are simple and contained. I’m hyper-conscious of the air against my skin. My brain is running around in circles. I’m a million miles away, thinking about everything except what’s right in front of me. Plus, on top of this sundae of neuroticism is the cherry of getting my photo taken.

I hate getting my photo taken.

I’m fumbling along, trying to get the moves right. I usually guage my poses by sneaking glances at other students. This time, I avoid looking at anyone else, as though my eyes would shoot laser beams and cause them to combust.

At some point, I forget I’m naked because I’m  just trying to get into position. I breath in and out along with the teacher to the best of my ability, and continue to fume about nothing. Why am I so damn angry? Am I going to go my entire life without ever being able to just turn off my brain?

It strikes me that this is more of a fear than being naked. More than exposure, I feared that I just couldn’t let go. I like to keep a never-let-them-see-you-sweat mindset, and here I was, lost in a little hyper loop of my own making.

King had recounted his first experience with nude yoga over the phone with me. He said he flaked out of the first few attempts. When he finally attended a class, his reaction was not what he— or anyone else— might have guessed. He was uncomfortable, despite standing a full six and a half feet tall and having more visible abdominal muscles than one might be aware a human can possess.

His reaction during the class as he recounted it transfixed me. He said he got angry. Not at anyone or anything in particular. Just internalized animosity bubbling up to the surface as he forced himself to do something decidedly outside of his comfort zone.

I experienced the same spiral of indignation. I was annoyed, and then angry at myself that I couldn’t control my emotions and focus on the task at hand. The misleading fear of nudity became secondary, and then tertiary, to what I realized were actual existential fears about not being able to get the hell out of my own way.

I try to chant to myself. “Be present. Be present…” About ¾ of the way through the class, I’m able to slow my heart rate, and try to focus on the poses. It helps that I’m shaky and out of practice—I have to concentrate just to stay stable. Once we reach the final pose, Shavasana, I’m in the beginning stages of feeling liberated and free, instead of cagey and tense. Instruction ends, we all stand, a few people embrace, and everyone begins to roll up their mats.

But I have work to do.

The most enlightening part of the whole experience was milling around after class, eating snacks and conversing with the other students. Completely naked.

I interview people for a living. It’s often part of my job to put them at ease, and keep the conversation flowing. This can be challenging on a normal day. Even more so when my recorder keeps bumping into my nipples.

One woman, a repeat student, spoke of her struggle to accept her body, and her history of a troubled relationship with food. She professed a personal turning point after a single nude yoga class. Many of the repeat students mention they are now careful of who they discuss their practice with, due to the reactions they get. Some discuss it every chance they get, in an effort to normalize the idea among the uninitiated. Of the dozen or so people in attendance that evening, about 4 in addition to me had never done nude yoga. One was a yoga instructor. She had the searching eyes and furrowed brow of someone who was forming their thoughts as they were saying them. She said that she was surprised at her own derogatory self-talk, and then mad at herself for her inner monologue. The emotional surge, it seems, might be characteristic of the breaking down of these internal walls. She told me that she would need some time to sort through her reaction. I felt the same way.

Nude yoga strips away all that is unessential. Including your designer athleisure wear—and your negative thoughts of all stripes.

If the thought of doing yoga naked in a roomful of strangers scares you, take a step back and examine what you’re really afraid of.