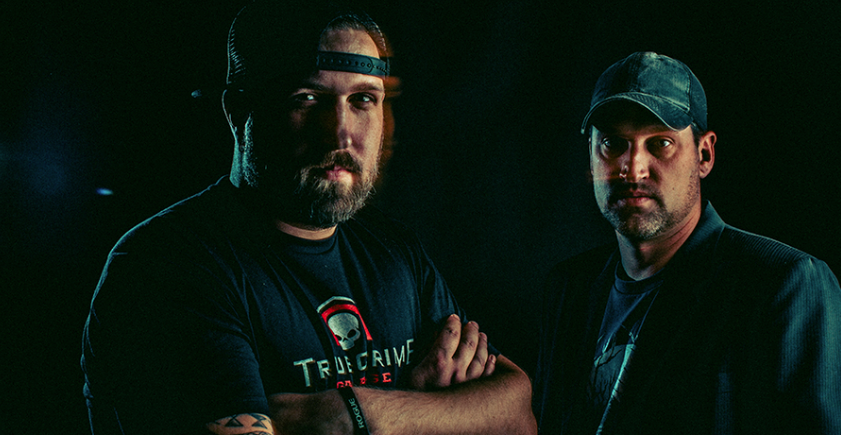 At the corner of a cold bar, the walls echo with discussions of suspicion, deceit, and general human malevolence. The two men producing these echoes sip their drinks, hats pulled tight over their heads, their speech steeled by eerily extensive knowledge of murder and mayhem.

These two men aren’t plotting a crime—although they have no last name as far as the author knows. No, they’re carrying on their favorite hobby—one that has turned into a career—which is breathing new life into cases long forgotten, and rarely solved.

These two men are Nic and The Captain, and from a two-car garage they’ve built an unlikely empire on the unlucky—and in the process become de facto experts in a sordid field.

As it turns out, Nic and The Captain aren’t the only two “true crime dorks” out there. Their weird shared conversations became the foundation for True Crime Garage, now one of the most downloaded podcasts of its genre, swimming in the same sea as My Favorite Murder and Serial.

“From the beginning, [Nic] wanted everything to be as accurate as possible, and to leave out information if it can’t be verified,” The Captain said. “He takes his job very seriously.”

While true crime exploded as a genre, the boys were still shocked by their sudden popularity—especially when their unpolished first shows reached nearly 10,000 downloads.

Fittingly, it was a local story that really put True Crime Garage on the map. Episodes 16 and 17 focused on Brian Shaffer, an OSU student who disappeared from Ugly Tuna Saloona in March 2006 and was never seen again. As The Captain recalls, the number of listeners skyrocketed after the episodes were published, as they provided the first truly extensive look into the crime.

“It’s actually weird how much the case has done for us,” The Captain said. “I hope we’ve done something for it.” (The Shaffer episodes remain some of the most downloaded of the show.)

A new season is in the works; they renewed contracts for a year of steady advertisements, and there are plans to visit a few true crime conventions. There have even been discussions about converting the podcast to a visual medium. Many people have aspirations of doing creative projects with friends for a living; True Crime Garage’s DIY success shows that it can be done, and that it can be more than entertainment in the process. But while they get plenty of offers to sponsor the show or help with merchandise, thus far they’ve spearheaded their own success and are comfortable doing things on their own terms.