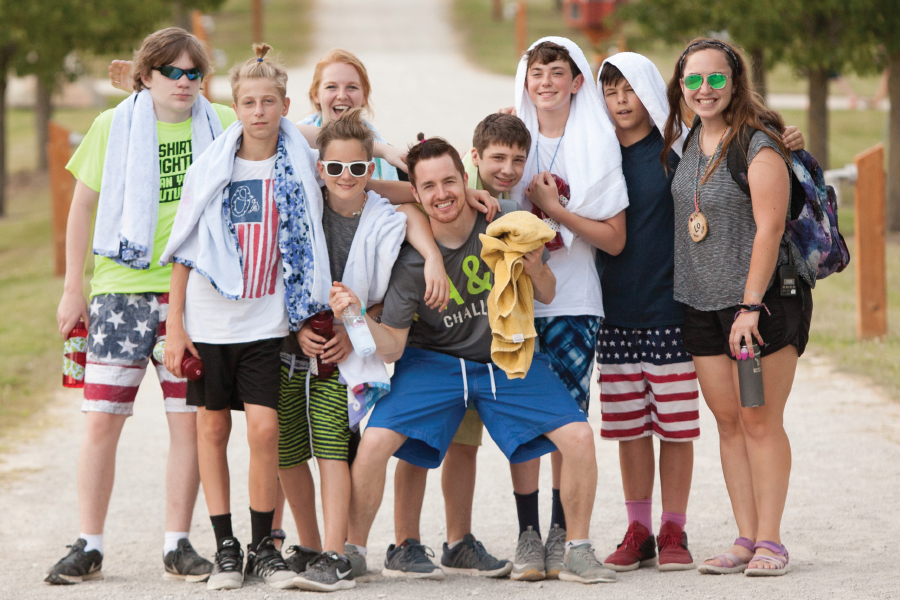 Crafting, archery, a check up with a cardiologist, and a campfire sing-a-long; the daily agenda for a camper at Flying Horse Farms in Mount Gilead Ohio might not be completely typical, but for the kids who attend, it’s often the best week of summer.

Flying Horse Farms is part of the SeriousFun Children’s Network, which lets kids with serious illnesses–including cancer, heart disease, blood disorders, and other medical conditions–attend camp every summer, at no cost to kids or their families.

Abercrombie & Fitch Co.  raises money to support Flying Horse Farms and SeriousFun’s other 15 camps around the world by hosting the annual A&F Challenge at its New Albany headquarters.

On September 7, Abercrombie’s campus will transform for a camp-inspired evening, complete with archery, hot air balloon rides, a zipline, “Camp Fitch” for kids, and an optional 5k.

Improving on the food that summer camp is known for, local food trucks will be onsite, with unlimited drinks and munchies included in the $75 ticket.

The event includes a full night of music, featuring performances by Fitz and the Tantrums, and Judah and the Lion.

Anna Ankenbauer, who spearheads the camp, first volunteered as a counselor at Flying Horse Farms in 2016. She was, in her words, a little nervous.

“I was terrified, to be completely honest… [but] once I got there, Flying Horse Farms is magical,” she said. “it’s honestly one of the best things I’ve ever done in my life.”

Ankenbauer spent her week with the 7-8 year old girls. “It’s really a jam-packed week filled with pretty much everything you can imagine at summer camp, from canoeing to fishing to singing and dancing before and after mealtimes… I totally forgot about everything else except hanging out and playing with these kids.”

During heart week, for example, the head  cardiologists from Cleveland Clinic Children’s and Dayton Children’s hospitals are on-site.

Campers are able to receive treatment for their illnesses while also getting a week to experience summer camp. All activities are adaptable so that all campers can participate, even if their illnesses would normally prevent them from doing so.

Ankenbauer said she was impressed by the way camp staff made everyone feel comfortable.

Abercrombie & Fitch Co.’s partnership with SeriousFun started in 2011, when some employees decided to volunteer at Flying Horse Farms.

This caught the attention of the company’s philanthropy committee, who learned that SeriousFun’s international sites aligned with the company’s global footprint.

In 2016, the company made a five year, $15 million commitment to the cause. It also sends over 100 employees to volunteer at SeriousFun camps around the world every summer, covering their travel expenses and time off.

Being a camp counselor for a week forces adults out of their comfort zones. Ankenbauer recounted the first time one of her campers caught a fish.

“Little did I know that at Flying Horse Farms they have the tradition where you have to kiss the fish.” They call it “catch, kiss and release,” and the tradition applies to counselors and campers alike. Ankenbauer was glad to do whatever it took—even kissing fish—to make sure her campers had a fantastic week.

“Being able to spend time with these little girls—to watch them transform from being afraid and nervous and reserved into like dancing and singing little girls on the stage by the end of the week—is incredible,” she said.

For campers, the impact of camp lasts long beyond their week at Flying Horse Farms.

Many campers attend the A&F Challenge, and you may also find them running the 5K right beside you, as Henry did last year. Ankenbauer wants you to know that you (yes, you!) are cordially invited to attend.

“The Challenge is an amazing event for the Columbus community to come to. We’d love to host as many people from around the city as we can. There’s something for every age, and, I mean, ultimately, you’re partying for a cause. All of the fundraising and all of the efforts go back to SeriousFun,” she said

In that case, Columbus, party on •

The A&F Challenge will be held September 7 at Abercrombie & Fitch Co. headquarters in New Albany. To register or to make a donation to SeriousFun, visit anfchallenge.org.