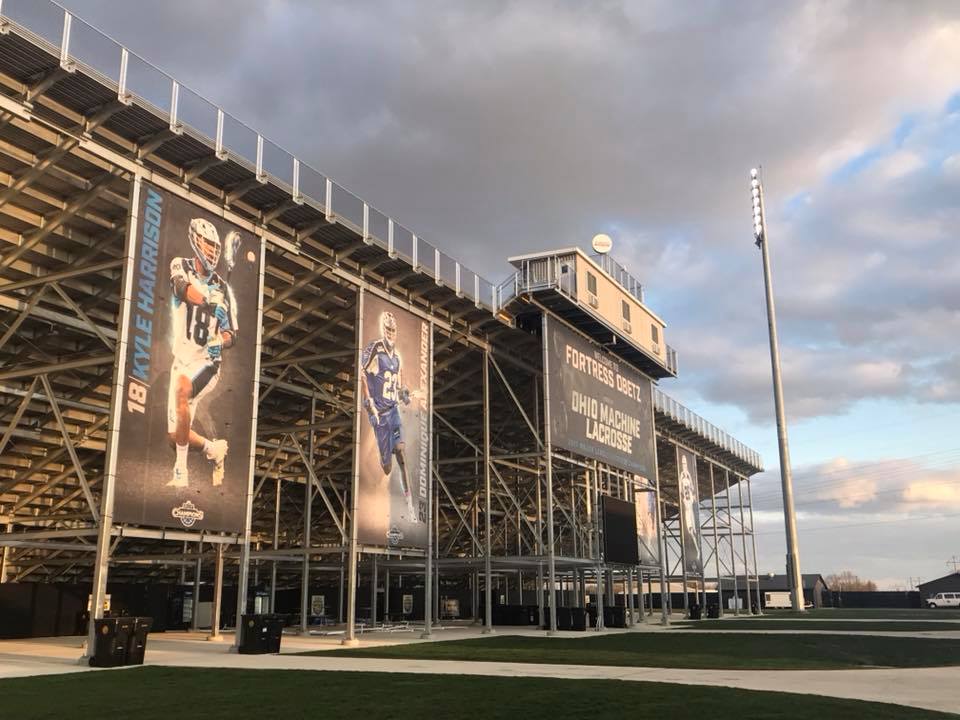 Nicknamed “the Sheen,” the Ohio Machine is a professional lacrosse team that opened their 2018 Major League Lacrosse (MLL) campaign and sixth-year in the league yesterday afternoon at home under the guidance of head coach and general manager Bear Davis against the New York Lizards.

Prior to face off, the Machine was recognized for winning their first MLL Steinfeld Trophy—the league championship—from last season.

The Sheen play down the road from the Crew SC practice facility in Fortress Obetz, which is the first lacrosse-specific stadium that was built in 2017 with a 6,500-seating capacity. That makes two professional sports teams in Columbus with groundbreaking sport-specific stadiums.

Following a first quarter that began and ended with goals by the Lizards—including a goal with one second left in the quarter—the Machine created permanent separation with eight goals in the second quarter that included a sleek behind-the-back score by #6 Connor Cannizzaro and twelve goals in the second half that cemented a blowout 25-13 Ohio win against New York on a chilly spring day in front of 3,347 fans.

“Coming out of halftime and getting that one (his sixth of the game), I was like, ‘Okay, I’m just going to keep shooting,’” Holman said. “And then, again, I was open…just trying to mix-up my shot locations so the goalie couldn’t get a read on where I was shooting.”

Courtesy of a blast from right back #25 Harrison Afful in the 27th minute from well inside the California visitor’s 18 on the shooter’s right side with an assist by #10 Federico Higuaín, Crew SC took the first lead of the match this past Saturday night against the San Jose Earthquakes in MAPFRE Stadium.

But just one minute before halftime, San Jose’s #9 Danny Hoesen equalized the score with an uncontested header.

Fast-forward to second half Crew SC substitute #13 Mike Grella who remained cool under pressure to cleverly tuck his game-winning goal inside San Jose’s near post by settling a cross from #9 Pedro Santos and carefully dribbling between two Earthquake defenders in the 83rd minute.

The Crew’s 2-1 win was their third home victory during this still early 2018 season.

One thing for certain is that Crew SC head coach and sporting director Gregg Berhalter needs to keep #28 Niko Hansen on the pitch with quality playing time.

Goals should materialize in the coming weeks if Mr. Hansen continues to put himself in great goal-scoring positions, which has been evident throughout the past couple games.

Columbus Crew SC (14 points) will travel across the country to play the struggling Seattle Sounders (4 points) this Saturday at 4 p.m. at CenturyLink Field. The game will be televised on Spectrum Sports.