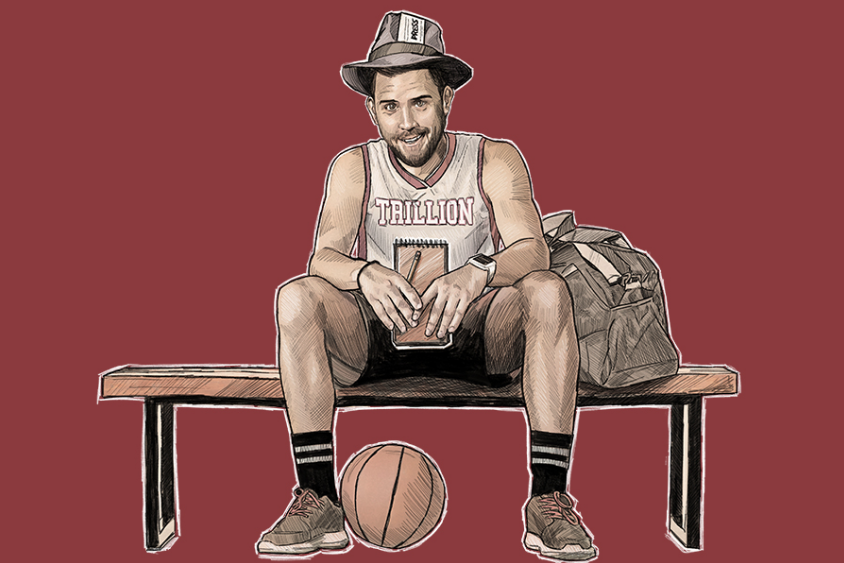 “You have read this first sentence of the first blog, so you might as well just keep reading.” — intro to Club Trillion, October 24, 2008.

For a guy who doesn’t like writing, Mark Titus has made quite the life out of it.

The former Ohio State basketball benchwarmer, whose witty and juvenile Club Trillion blog gave fans a peek at locker room antics and propelled him to national relevance a decade ago, continues churning out college basketball content imbued with sarcasm, now as a national correspondent for The Ringer.

You’d think he had it all planned out, some sort of creative-writing prodigy intent on leveraging a hobby into a foothold in an ultra-competitive industry. Far from it.

Born and raised in Indiana, Titus was dreaming—like any self-respecting Hoosier—of being a star basketball player.

He couldn’t have imagined even staying in Columbus after college (he hadn’t stepped foot on campus before attending Ohio State in the fall of 2006), much less steering Club Trillion into a career alongside Bill Simmons, creator of The Ringer and a sports blogging and podcasting godfather.

And beneath the affable facade, he battled crippling depression that dragged him to the brink of suicide—something he kept hidden from friends and family until just three years ago.

Getting off the bench

For Titus, introducing Club Trillion—an homage to benchwarmers who record 1 minute played, followed by a bunch of zeroes where statistics should be—was about having a creative outlet, not necessarily about being a writer.

He enjoys much the same creative leeway under the tutelage of Simmons as he did as an amateur blogger. Titus is a college basketball writer for The Ringer, an eponymous website and network of podcasts fusing sports and pop culture in the same effortless way Titus managed to do as a 21-year-old math major with no journalism experience.

Living in Hilliard and traveling occasionally to Los Angeles (where The Ringer is headquartered), Titus spends his time watching college basketball and then writing or talking about it on his One Shining Podcast—a play on the One Shining Moment theme to college basketball’s March Madness tournament – which, in classic Titus fashion, skews more toward sarcastic commentary.

You always write what ya know, which means Titus manages to weave in Ohio State and Columbus perspectives into his work for The Ringer. He signs off every podcast with a “Save the Crew” shoutout. When his college coach, Thad Matta, was let go from Ohio State in June 2017, Titus shared his disappointment in the story, “Thad Matta Didn’t Get the Goodbye He Deserved.” And there was Titus’ riveting story, “Oden on Oden,” about his close friend Greg Oden’s injury-plagued career.

It’s the sort of work that makes clear Titus is a legitimate journalist. It can’t be surprising to loyal Club Trillion followers. He’s a damn good writer, with natural flow and effortless humor.

Even as Titus settled into his role as comedic relief for the nationally ranked Buckeyes squad, there was always more to the affable blogger than what the public—and even family, friends and teammates – could see.

In March 2015, he disclosed in a Reddit AMA “Ask Me Anything” that he had been dealing with crippling depression since he was about 16 years old. He had gained about 50 pounds after college and his marriage almost crumbled. It was a secret known only to his wife.

Titus today says he realized something was seriously wrong when he first contemplated suicide at 21, the height of his fame and college antics.

“The first time I put a belt around my neck, I was like, this is bad,” Titus recalls, more matter-of-factly than as if sharing something deeply personal.

It’s hard to tell if he might tear up or crack a joke. It’s sort of jarring to hear from the guy who’s written so many laugh-out-loud things.

“I started pulling and then I got to a point where, like, I couldn’t breathe and then I just, like, started crying, and let go and fell to the floor,” he says. “And I just started sobbing. And I went to sleep. And then I woke up the next morning and went to basketball practice and, like, was cutting jokes in the locker room. And then when I went home that night I was like, the last 24 hours I’ve had – that’s a problem, there’s a problem there.”

It was Robin Williams’ suicide in August 2014 that led Titus to finally take the burden off himself. And those closest were caught off guard.

“I was beyond surprised,” recalls Oden, a star at Ohio State and Titus’ friend since childhood. “I mean, one of the first things when that came about was me and Coach Matta had a conversation and we both was worried, you know, because we at first really couldn’t tell, or did not know, any of that stuff. It wasn’t on the surface.”

Depression is still a part of life, Titus says, but he’s in a pretty good spot, able to call his dad or brother to talk through things. It’s been like climbing out of a hole.

“And I’m at the point now in my life where I’m out of the hole. I’ve walked, like, 10 miles away from the hole, but the rope is still around my foot,” he says. “It’s just something you kind of have to live with and know that it’s there.”

Titus is 30 now. He’s in better shape. He’s anchored in Columbus with his wife, and has friends from Ohio State close by. He’s still involved with A Kid Again, the charity for critically ill children that was the beneficiary of thousands of dollars of Club Trillion T-shirt sales.

Titus can’t hazard a guess at what his career might hold. He’s more of a day-at-a-time kind of guy, no Uncle Rico reminiscing about his Ohio State days—“once was plenty,” he laughs.

“I’m very happy with being 30 years old and living in the suburbs, as crazy as that sounds,” he says.

The words of a man now writing his own narrative.

Listen to Titus chop up the basketball world on One Shining Podcast. For more, visit theringer.com. His autobiography, Don’t Put Me in Coach, is available on Amazon.