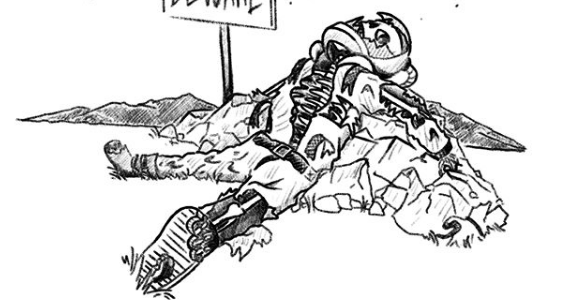 Update: It appears Zachary Hanson of the band Hanson has passively responded to the individuals accusing him of ripping off a local photography concept.

Last week, Hanson posted a sketch of a small astronaut on Instagram which some Columbus residents believed looked a little too similar to a photo by Small Steps Are Giant Leaps.

Hanson has removed the post and come back with a new illustration.

The image and time-lapsed video of the design process depicts a battered astronaut collapsed next to a sign that says “ASTRONAUTS BEWARE.”

“After the interesting events of this week, this image popped into my mind…” he wrote. “Thanks for always having my back. #fansons“

After the interesting events of this week, this image popped into my mind… Thanks for always having my back. #fansons

What do you think of this response?

Did one of the Hanson brothers rip off a beloved local photography concept?

In a recent Instagram post, Zachary Hanson of the popular American pop-rock band Hanson (see “MMMbop”), posted a sketch of a young astronaut with the caption, “#StringTheory inspired art.”

The illustration bears a striking resemblance to a photo by Small Steps Are Giant Leaps, a local photography concept aimed at reminding parents that kids see the world as a new and exciting place just waiting to be explored.

A member of the community, Andi Atwood, posted a side-by-side of the illustration and the photograph, accusing Hanson of stealing Small Steps Are Giant Leaps’ likeness without giving proper credit.

What do you think: Inspired original art or a blatant rip-off?