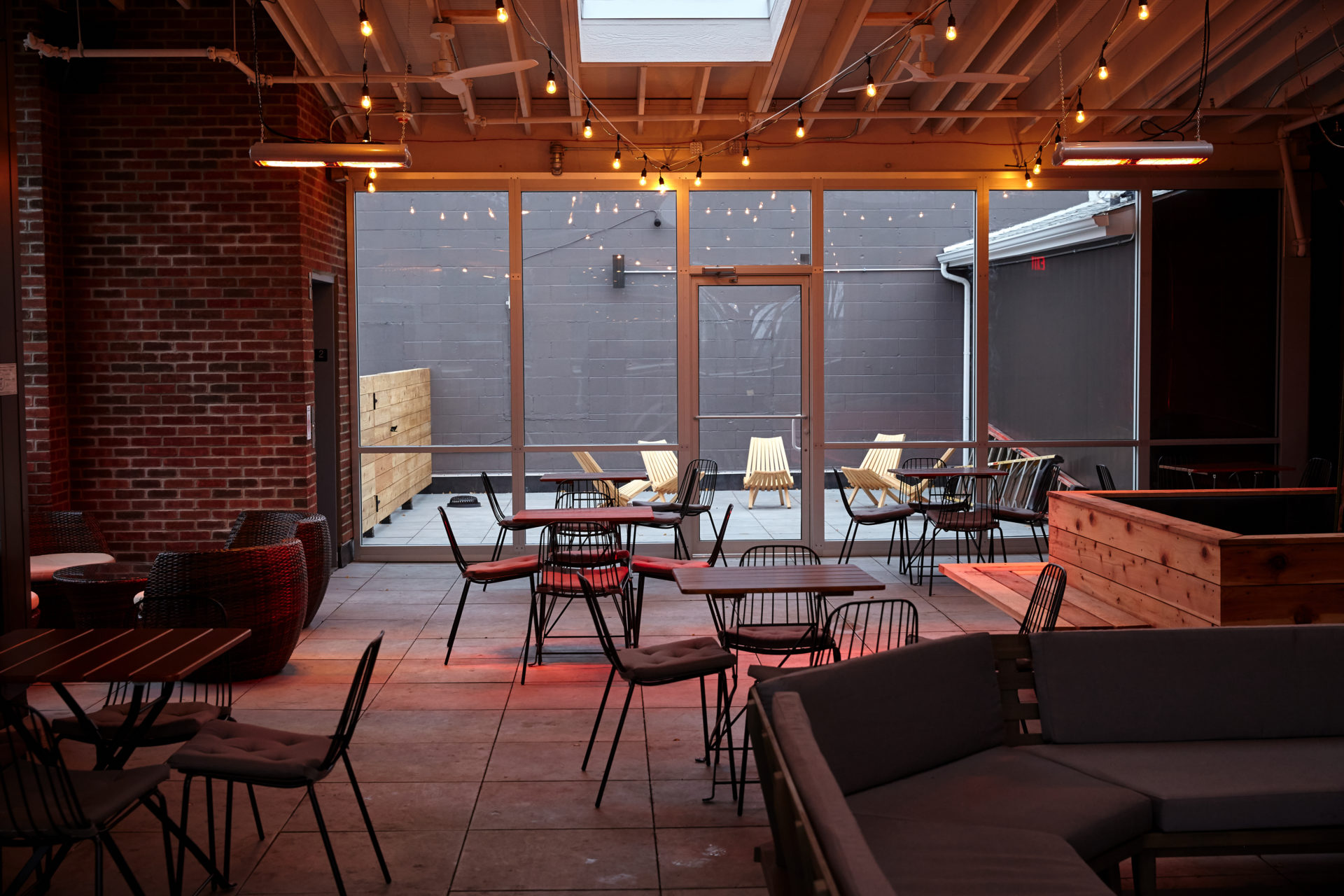 Expanding operations is nothing new for the people at Seventh Son. From their fully-stocked and recently expanded taproom on Fourth Street to their craft beer and wine shop, The Barrel and Bottle, in the North Market, making waves and setting trends seems to be second nature.

That’s how it’s been since their humble beginnings five years ago. Now, going to Seventh Son for a drink is just as much of an experience for the booze as it is for the atmosphere with their retractable rooftop patio. Keeping that trend-setting spirit alive, the owners of Seventh Son have ventured into a new, and sour, operation and created Antiques on High. 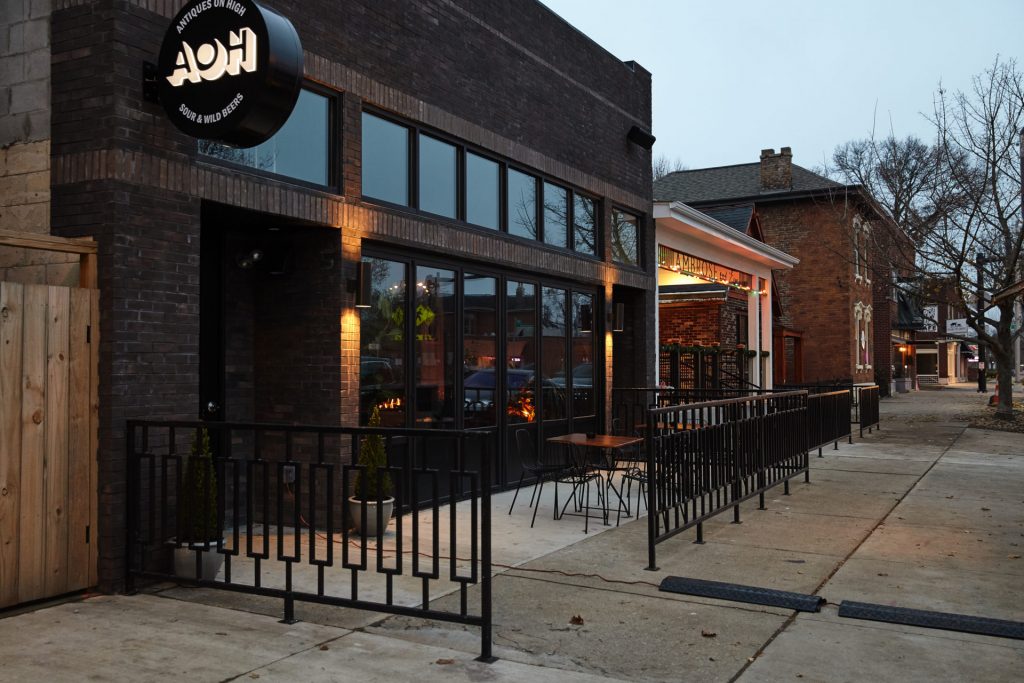 The new brewery will reside in the Columbus Brewery District where they will specialize in sour, funky, and Belgian-style beers. Sour beers are a combination of barrel-aging, blending, and a strange sorcery of spontaneous fermentation. In other words, while most modern breweries stick to a very strict and structured brewing process when it comes to yeast fermentation, sour beers allow yeast and other bacteria grow wild to help form that tart taste. Don’t be scared, though, this kind of bacteria isn’t a bad thing.

The space will boast 5,000 square feet, along with decor within the store that pays homage to the antique mall that previously resided there. Many of the artwork and pieces hanging on the walls and around the brewery date back to midcentury times all the way up to the 1980’s—much like what the Greater Columbus Antique Mall would have sold during their time on High Street.

“When we took possession of the space it still had a busted old sign and everything,” said brewmaster Colin Vent. “We took that as inspiration for the name. It works nicely conceptually in that sour beer production is a very old school, old world way of making beer, so we’re somewhat crafting antiques here.”

The space features a giant double Chesterfield sofa sitting in front of a breeze-block gas fireplace, eclectic artwork, classic beer signs, and wooden community tables. Hundreds of vintage beer cans behind glass panels are built into the front and sides of the bar itself.

“We literally went antiquing for most of the decor,” said Vent. 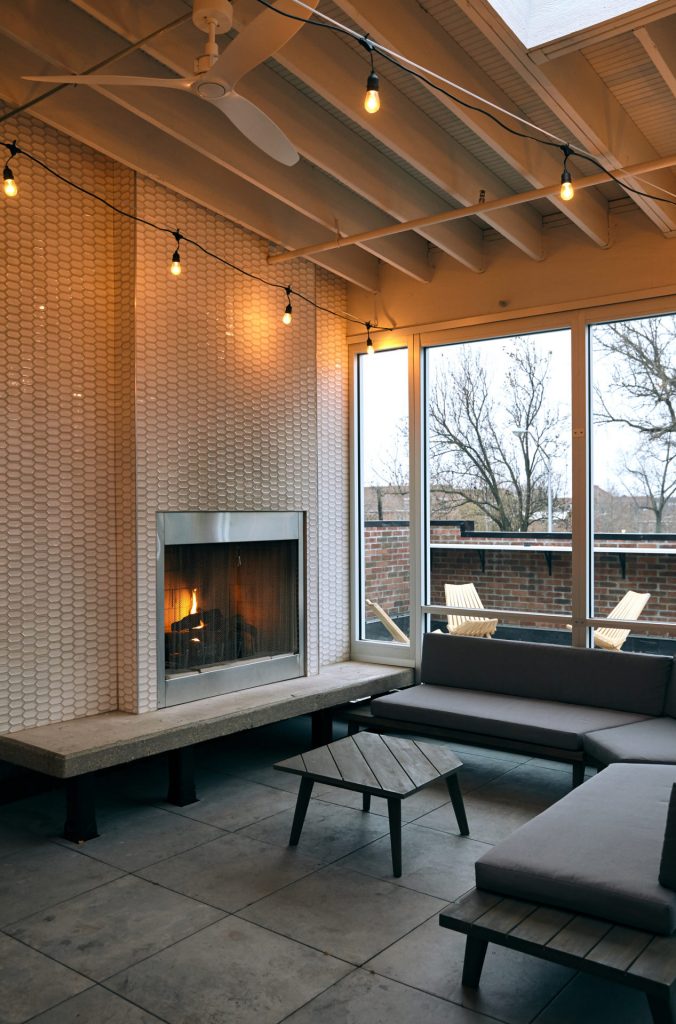 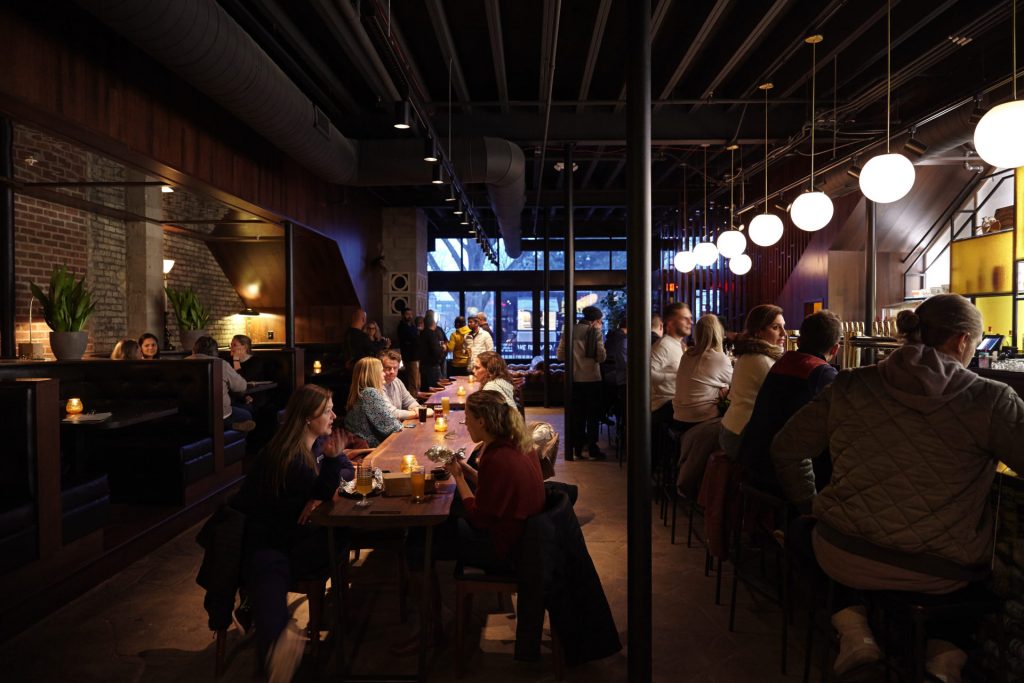 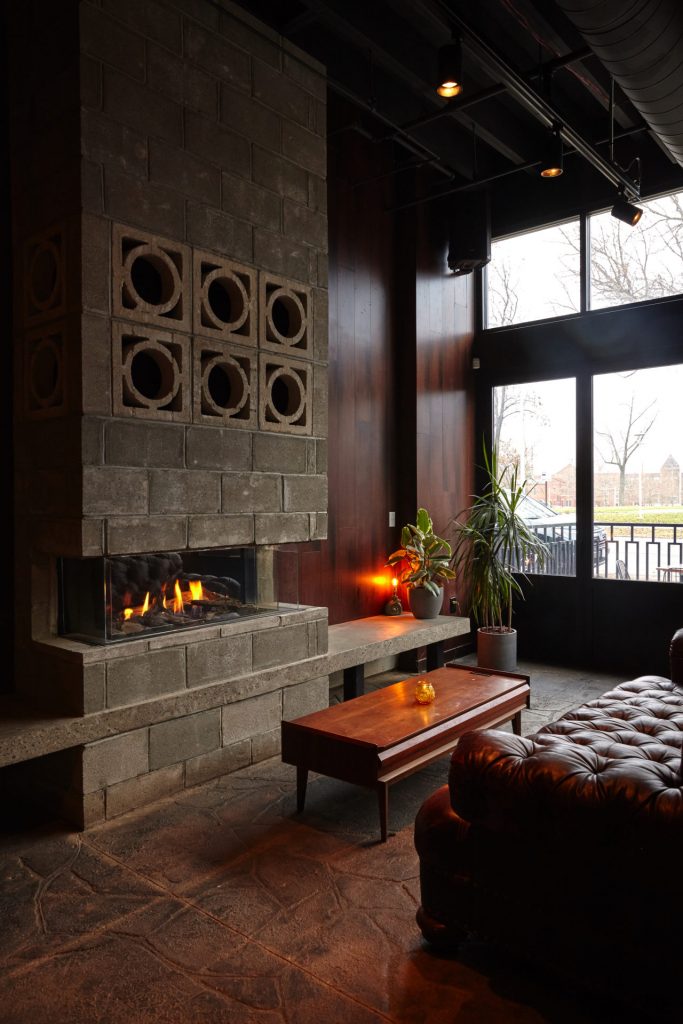 Antiques on High will be both a complement and contrast to their flagship brewery, a chance to explore the funkier styles of beers, although traditional craft fans will be able to find some of their favorite Seventh Son beers on tap as well.

“It allows us to show another side of our talents. We can take a step back from full-on industrial brewing and slow way down to explore blending and aging and all the things that go into making these beers,” said Vent.

Although the sour stuff may be making a splash online, the decision to go funky was not trend-driven, Vent insists. The entire ownership group, consisting of Vent, Collin Castore, Jen Burton, and Travis Spencer, has been playing with the idea for several years, and Vent doubts you’ll be seeing any of his sour beers sitting on the shelves at The Barrel and Bottle, largely for practical reasons.

“We’re quite proud to be making beer in this historic district, said Vent. “We can’t produce much of this style of beer at a time. Some of the blends involve beer that’s aged for upwards of 18 months, so that really precludes muc

h in the way of distribution.”

Instead, Vent hopes the unique style will be a homing beacon of sorts for those who appreciate sour beers and want to have an ideal experience hanging out and enjoying a beer brewed by those invested in the process, with a true love for presenting these styles.

“We are committed to our spaces. We work hard to create comfortable, cool bar experiences, and keeping those niche beers in house presents a solid reason for making the trip in to see us,” said Vent.

Part of that experience will be the rooftop patio with its lounge-style seating and fireplace, a definite reason to visit, relax, and make new friends in the brewery district.

“There’s an upstairs four-seasons patio with amazing views of the city as well as small front and back patios at ground level,” said Vent. 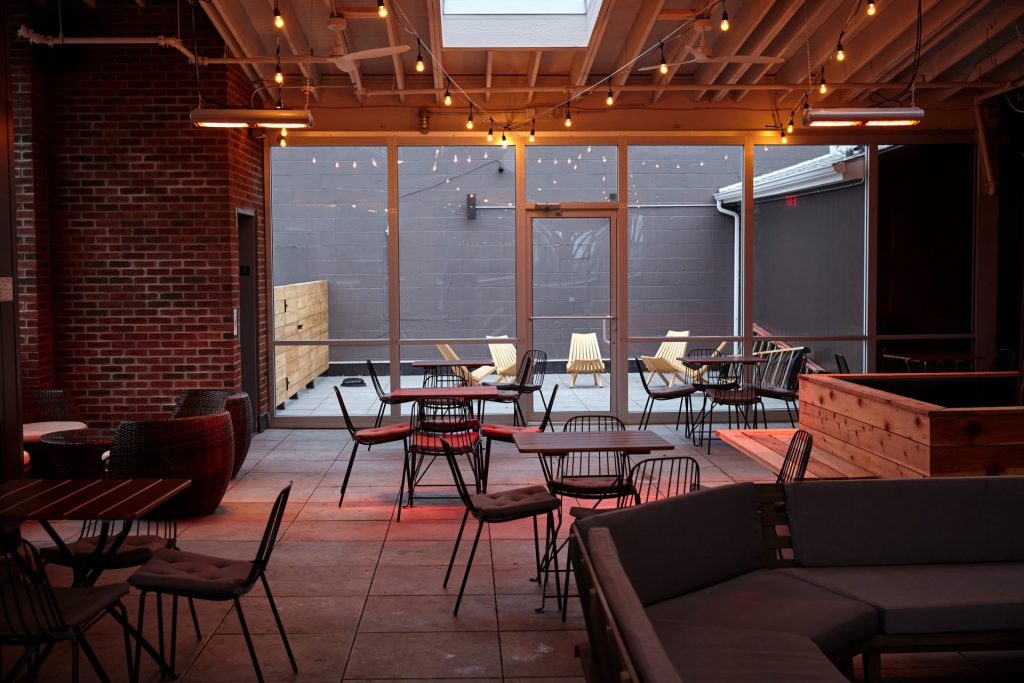 Initially, Antiques on High will have scheduled food trucks with plans to move towards carryout from Ambrose & Eve, also a new addition to the Brewery District.

New to the sour beer scene? The style can be an acquired taste. Don’t be afraid to ask for help from the experts. Vent suggests a frank conversation with your bartenders, the experts on Antiques’ ever-changing lineup.

“They can guide a person to a beer with a lower amount of acidity and more accessible flavors,” explained Vent. “Right now I’d recommend either our sour red ale Hoop Driver, or the blended saison Trinket. Both of these have a minimal level of acidity, just enough to add a twang on the finish.”

Although Antiques on High hopes to offer a boutique experience to play with unusual beers styles, there’s a little something for everyone.

“We’ve got 24 taps that are divided between the sour and funky beers, hop-focused hazy beers, draft wine and draft cocktails,” said Vent. “ 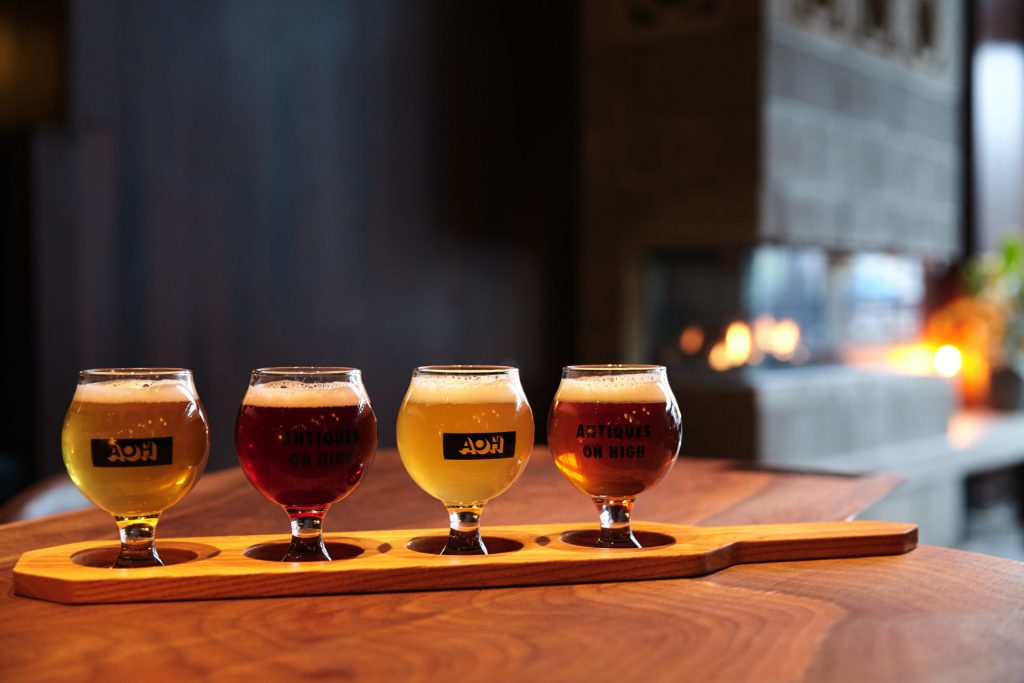 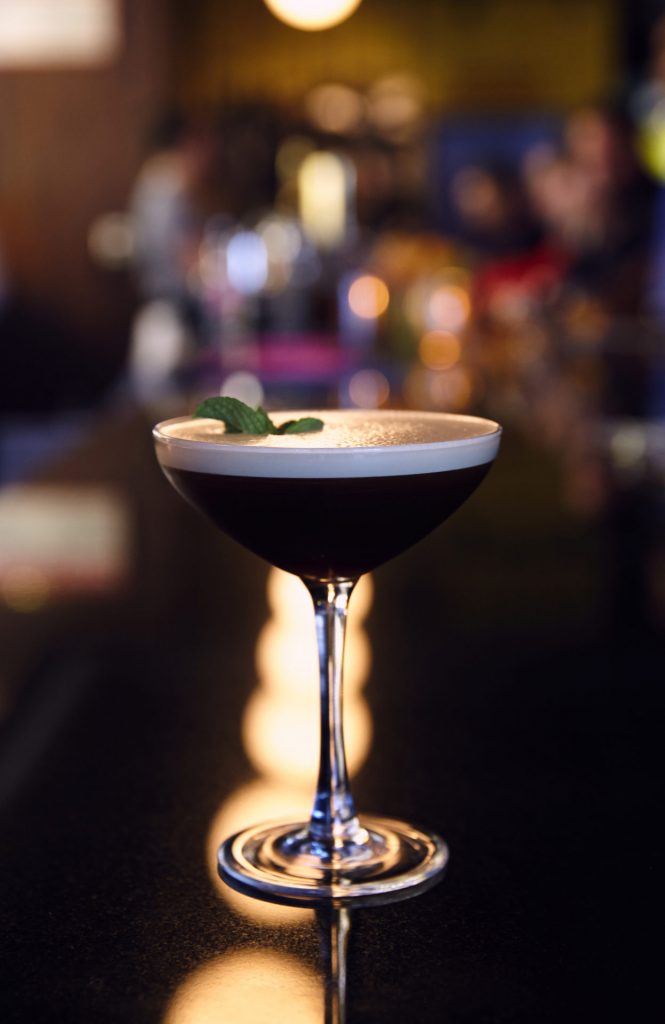 The cocktail program was developed by Travis Owens from Behind the Glass Consulting. We really wanted to offer some stuff you don’t see around town much, that’s where the draft cocktails and wine came into play.”

Landing right on trend, or perhaps staying ahead of the curve. It’s all a bit like spontaneous fermentation itself—accidental at first, then deliberate. But it seems to be the direction for the Seventh Son brewery empire as it continues its way at the forefront of Columbus’ bar scene, something it achieved largely by loving what they do.

“It’s a really fun way to brew,” said Vent, hoping Columbus sour fans, old and new, will agree. “Hopefully they’ll think it’s cool and wanna hang with us and have a couple.”

Hilliard looking to tap into its first brewery soon 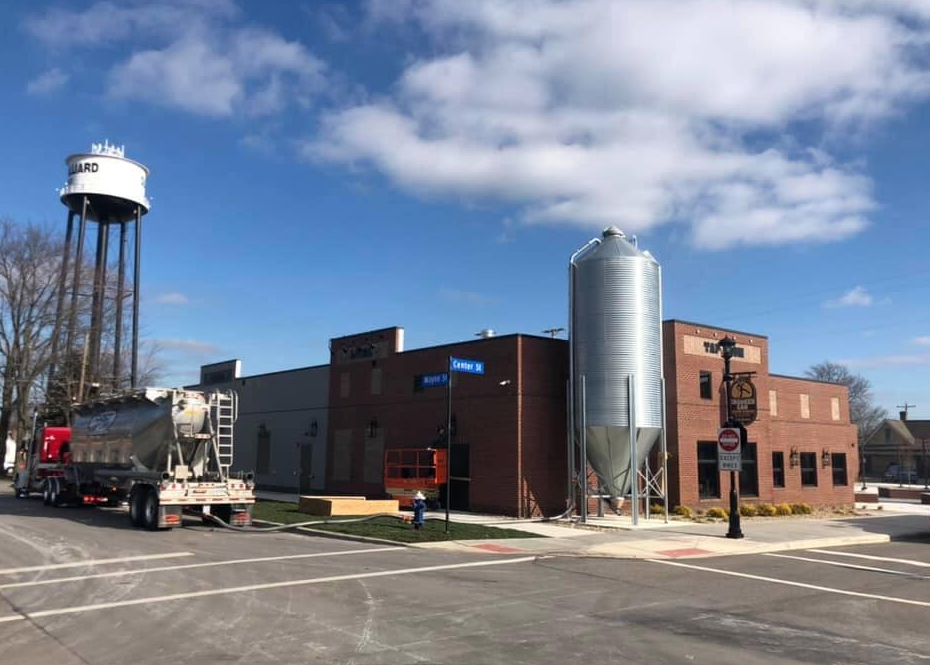 Orlando-based Crooked Can Brewing is targeting a February launch for their new taproom and brewery space in Hilliard, according to Drink Up Columbus.

The 4,000-square-foot taproom will be joined by a 7,000-square-foot patio, which will provide outdoor seating for the brewery as well as Hilliard's Center Street Market, which is expected to open in March.

The taproom will also feature large viewing windows where patrons can get a behind-the-scenes look at Crooked Can's new 16,000 square foot brewing operation.

Once open, Crooked Can Brewing will be located at 5354 Center Street in Hilliard. For more info, visit Drink Up Columbus.

If you've sequestered High Bank into strictly a booze category, you're missing out on one of the most well-executed comfort food menus in Columbus, especially during Restaurant Week.

Weighing in at a mere $20 per person, High Bank's three-course menu is so tantalizing, you'll struggle to pick just one dish from each. Believe me, I certainly did.

Check out the menu

With great power (being tasked with choosing just one starter) comes great responsibility (making sure I pick the best). Luckily, there really is no wrong move.

Ever had Taco Bell's Nacho Fries? High Bank's are better. Crispy, battered fries smothered in melty queso, seasoned beef, refried beans, and a generous heap of sour cream make for an elevated, indulgent, heavyweight starter. The portion is definitely big enough to share, but I wouldn't blame you if you didn't.

Since stick-to-your-bones food is officially back in season, you have to get down to High Bank for their fried chicken menu items. The chicken is battered using an incredibly light and crunchy buttermilk, fried, then dusted with cayenne that leaves a warm glow on your palate—not too hot, not too mild.

The sandwich is an instant comfort food classic, but the High Bank Bowl is like the designer version of KFC's Famous Bowl. The mashed potatoes are perfectly salted and buttered, the sweet corn adds just the right amount of sweetness and pop, and the cheese and gravy culminate into a savory sauce. Colonel Sanders would be impressed.

At this point, I was almost too full to function, but I had to press on. To absolutely no one's surprise, High Bank's third course did not disappoint.

I can't remember the last time I felt so repleted, but I'd do it again in a heartbeat, and so should you. At just $20 a head, this is a deal you can't afford to miss.