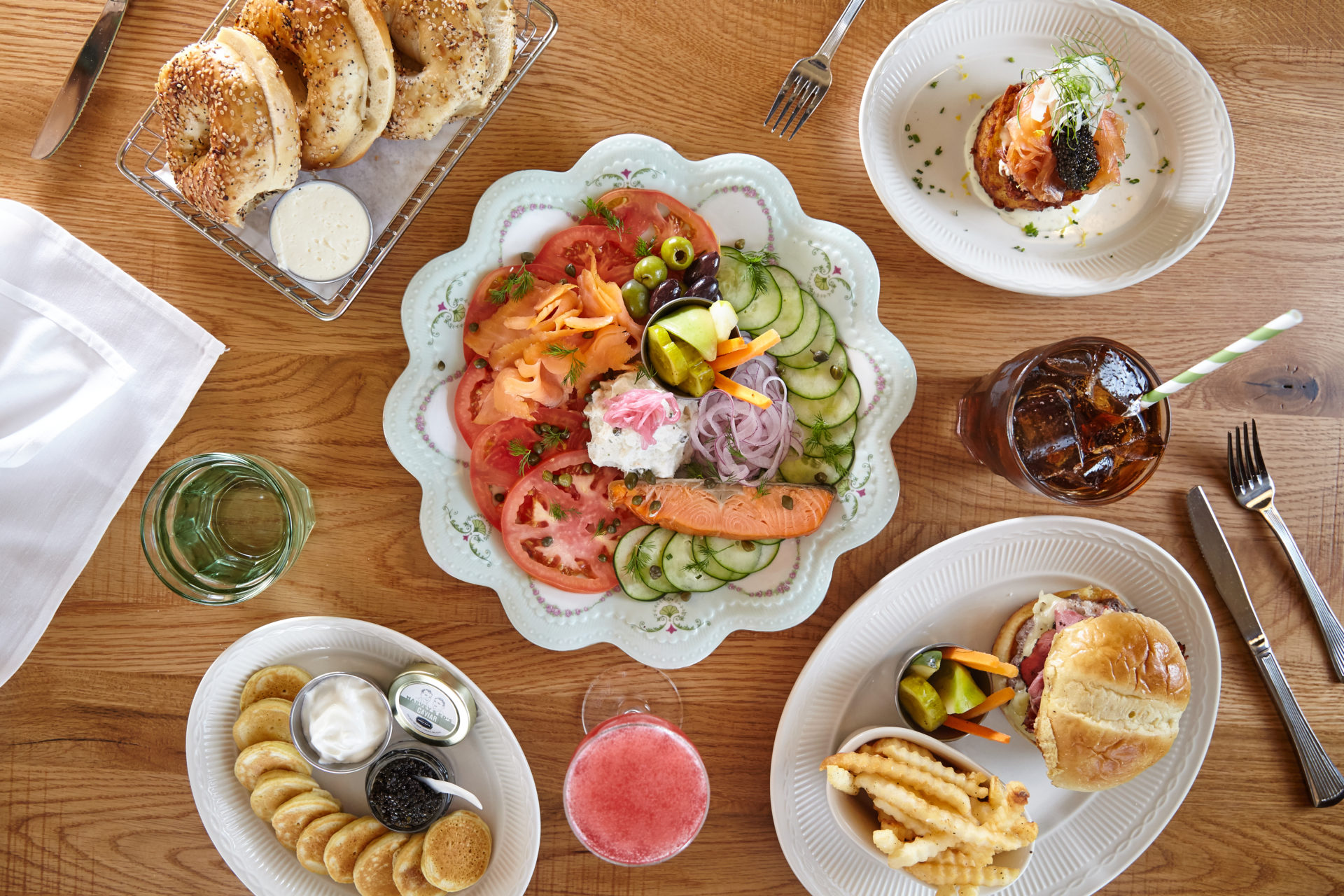 Wingardium Leviosa yourself to the Park Street Wizard Bar Crawl

If an upscale deli sounds like a half-baked idea, you obviously haven’t been to Harvey & Ed’s.

The latest creation from Cameron Mitchell Restaurants combines Jewish comfort food classics with artful execution in a Short North space that evokes the unpretentious ease of an East Coast eatery.

Named for best friends and brothers-in-law, Harvey and Ed are the father and uncle of CMR President David Miller, with many of the menu offerings inspired by his childhood and the familiar fare of the family kitchen.

But merely trading on pieces of the past isn’t enough to build a cohesive brand that carefully couples corned beef with a cocktail bar. That’s why it took a team of talent to craft a dining experience new to Central Ohio, yet still unique among the establishments from which they drew their influence.

“We wanted to do something that felt East Coast,” revealed General Manager Jill Armstrong. 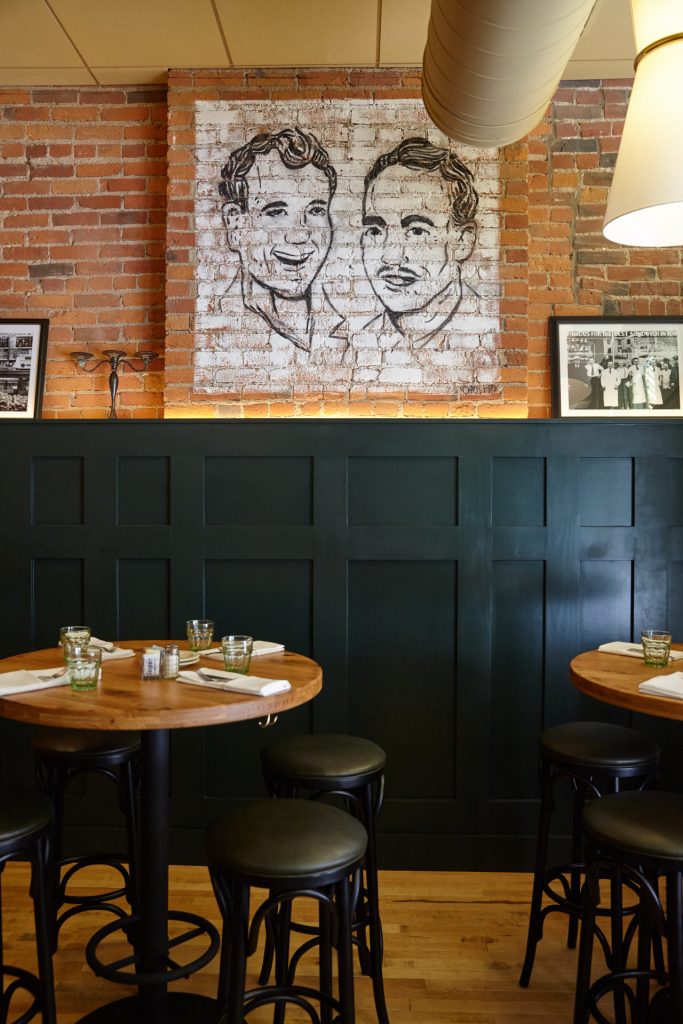 She and Executive Chef Jonathan Basch traveled to New York and Philadelphia to find the elusive balance between uptown appeal and downtown authenticity.

Both hail from Ohio and started relatively recently with Cameron Mitchell, and in the Short North—Armstrong as a server at The Pearl, and Basch as a prep cook at Marcella’s—affording the first-hand insights necessary to connect with the neighborhood and the clientele.

“We went to Katz’s, which is ‘go-go-go’ and not quite fine dining. We really loved Russ & Daughters and Sadelle’s, which have great vibes,” Armstrong noted. “In Philadelphia, we went to Abe Fisher, which is a high-end, more polished version of what we liked, all the way to Zahav, which is more critically acclaimed with a lot of Mediterranean and Middle Eastern influences.”

“That’s how we wrapped our heads around what Harvey & Ed’s was going to be, the difference between being a delicatessen and deli-inspired, a concept that didn’t really exist in this market, but would fit well in the Short North,” she explained.

The location was already a done deal, though the updated deli counter and dining room bear little resemblance to Rigsby’s Kitchen.

Amid construction hassles that abound in the area, foot traffic is brisk, even if parking is still a mess. Despite the newness and faint echoes of the former Italian eatery, the restaurant feels like it’s always been there, or always should have. 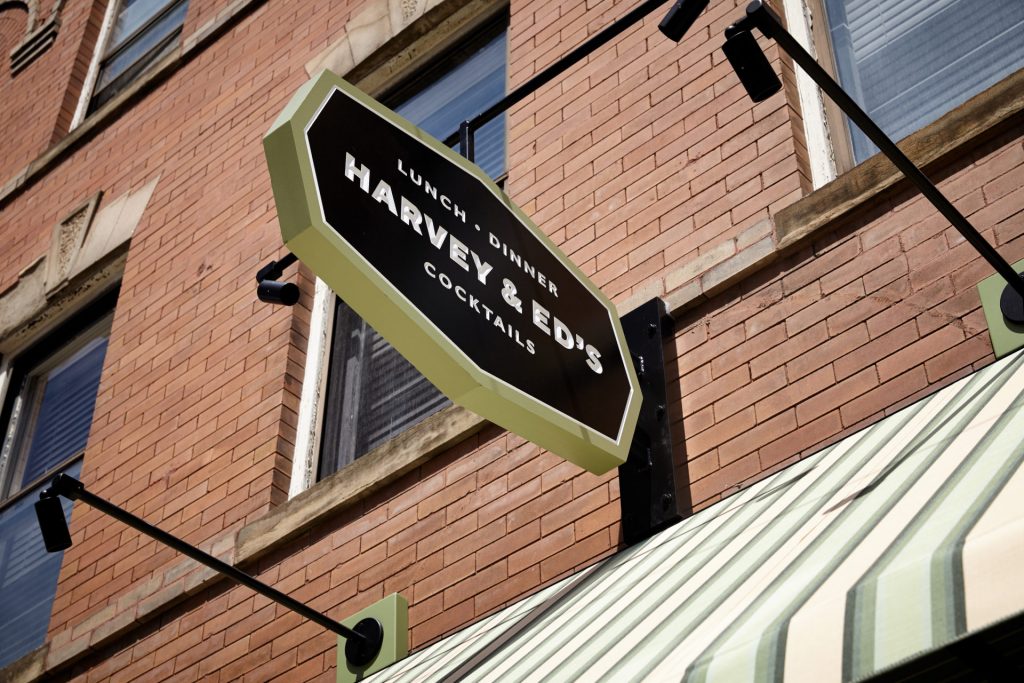 “Some people are just excited about the new concept, but we also have people who moved here from New York,” explained Armstrong, noting the table where we were seated served a couple originally from Brooklyn the evening prior. “It’s a mix of adventurous eaters who want to see what we’re all about and transplants to Columbus from the East Coast.”

It’s an easy oversight for ambitious restaurateurs to focus first on atmosphere and aesthetic, and let the menu evolve over time. But Harvey & Ed’s is in many ways new for Columbus—built around a pent-up demand for delicatessen delicacies for some, yet having to essentially introduce ingredients and entire entrees to many.

Even I didn’t know Columbus had a dearth of pickled herring until a friend was unwittingly pinched by the TSA trying to bring back a small jar from Russ & Daughters in his carry-on and made him toss it. He still can’t stop kvetching about it. 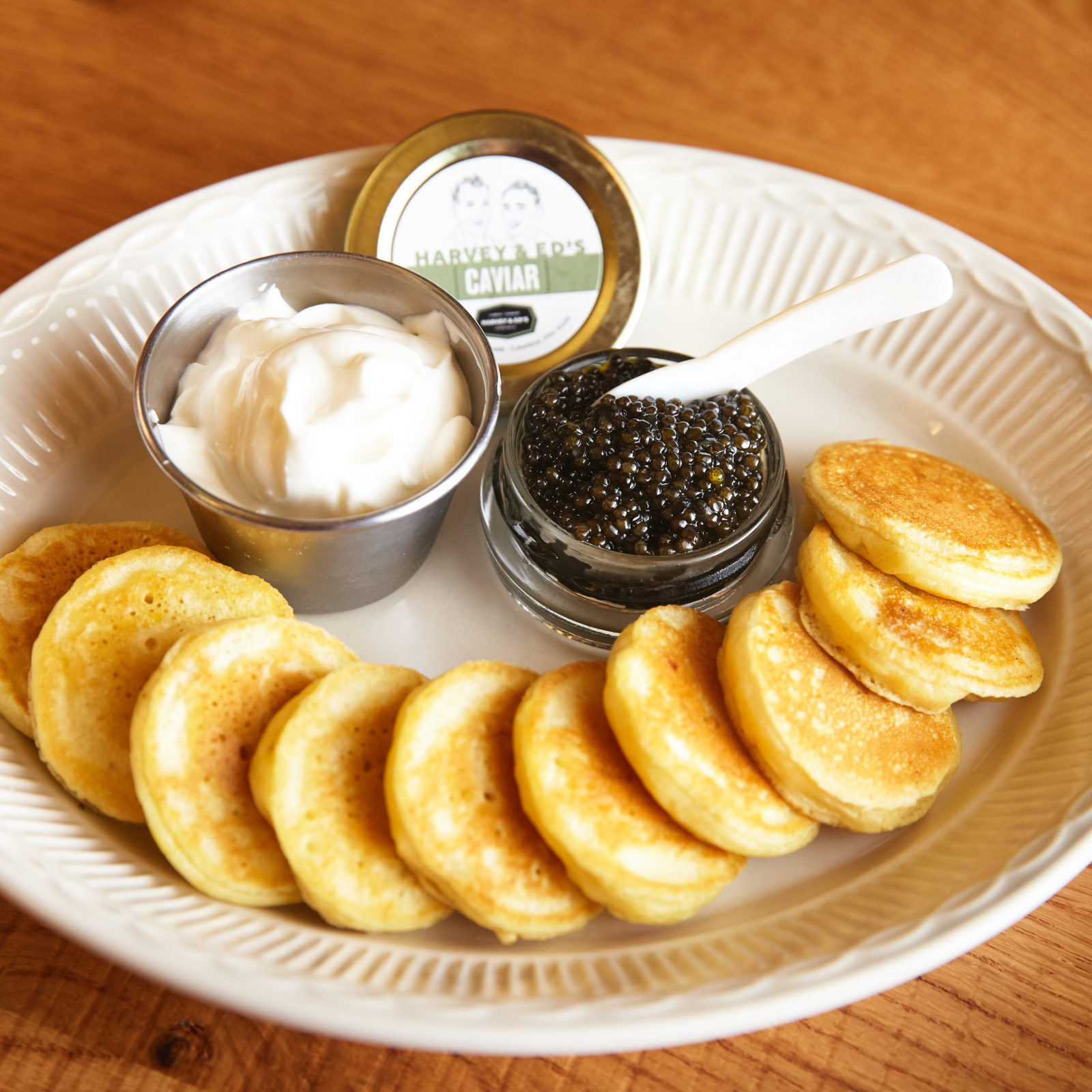 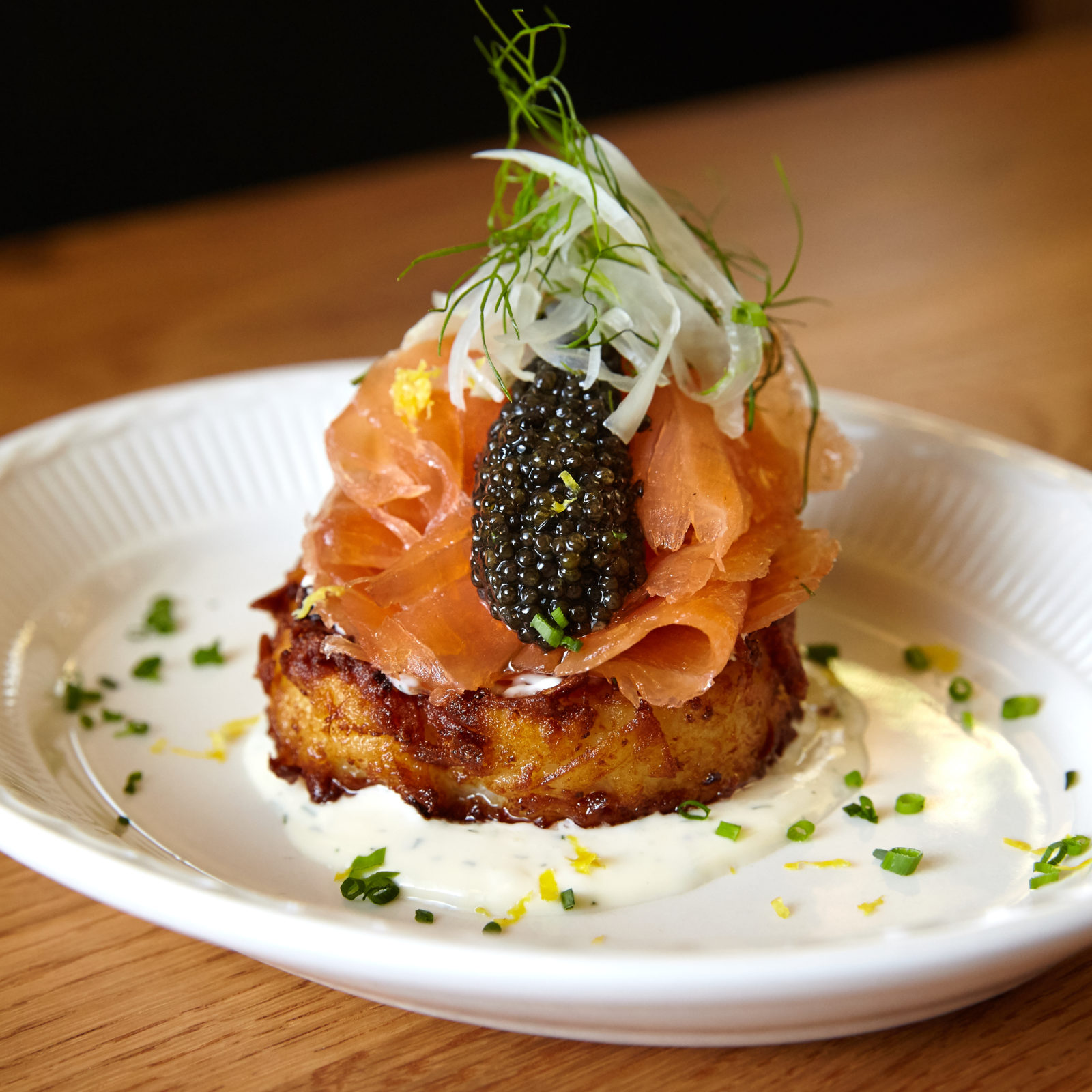 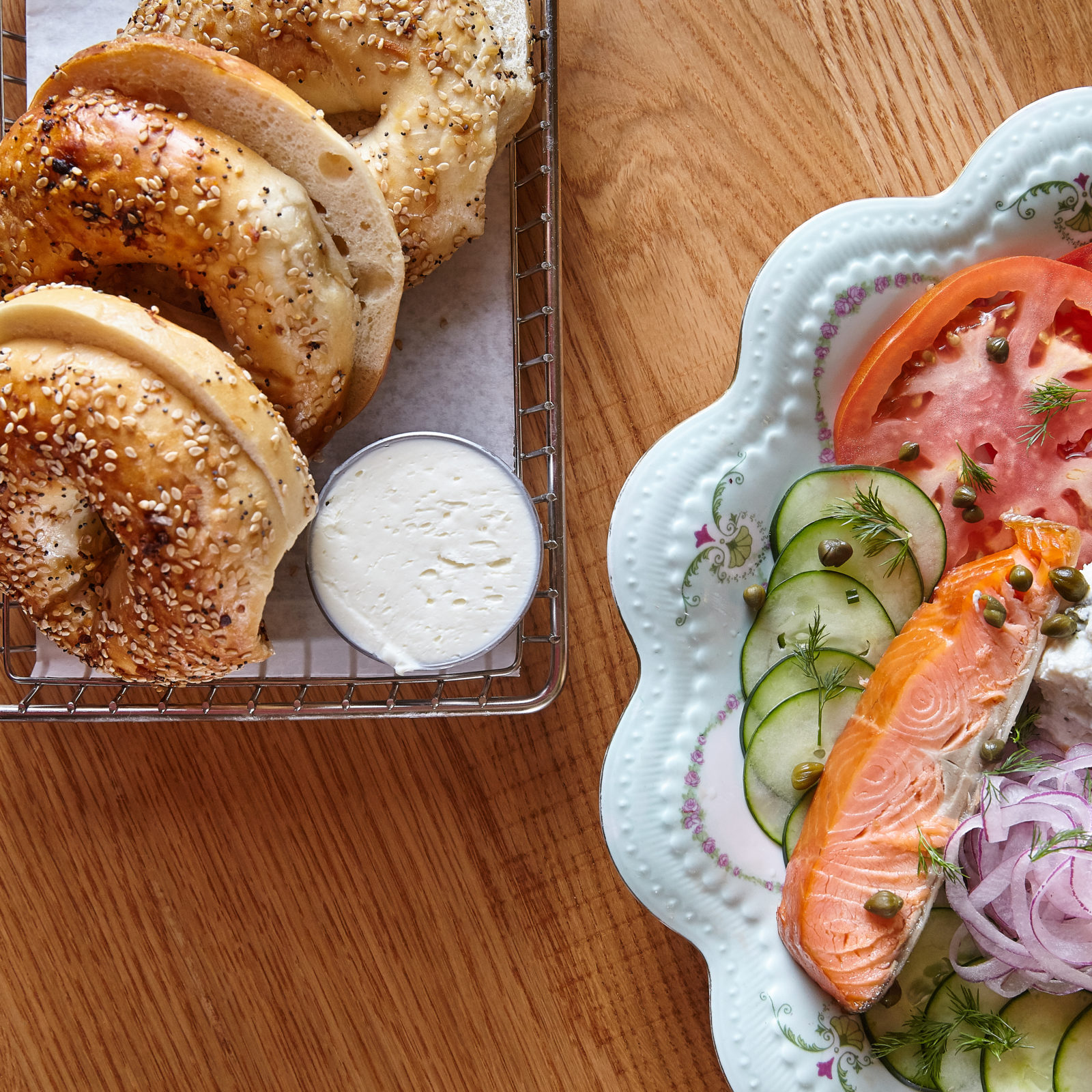 Though the capital city’s Eastern European roots are represented in the restaurant scene, and with a Jewish community among the largest in the Midwest, some dishes may still require a little deciphering for the uninitiated, offering a new appreciation of why Mrs. Maisel deftly described pot roast as “Methodist for brisket.”

“Not everyone knows what a knish is,” confessed Basch, charged with keeping the menu traditional, approachable, and innovative—which is a tall order for any chef. “We use chicken livers in our chopped liver. Some use beef livers, but there’s a little less iron and they’re sweeter, and we sweat the onions down in schmaltz.”

Bubbe’s Matzo Ball soup is far more familiar, even if it’s the size of a fist, just like Miller remembers them as a kid. 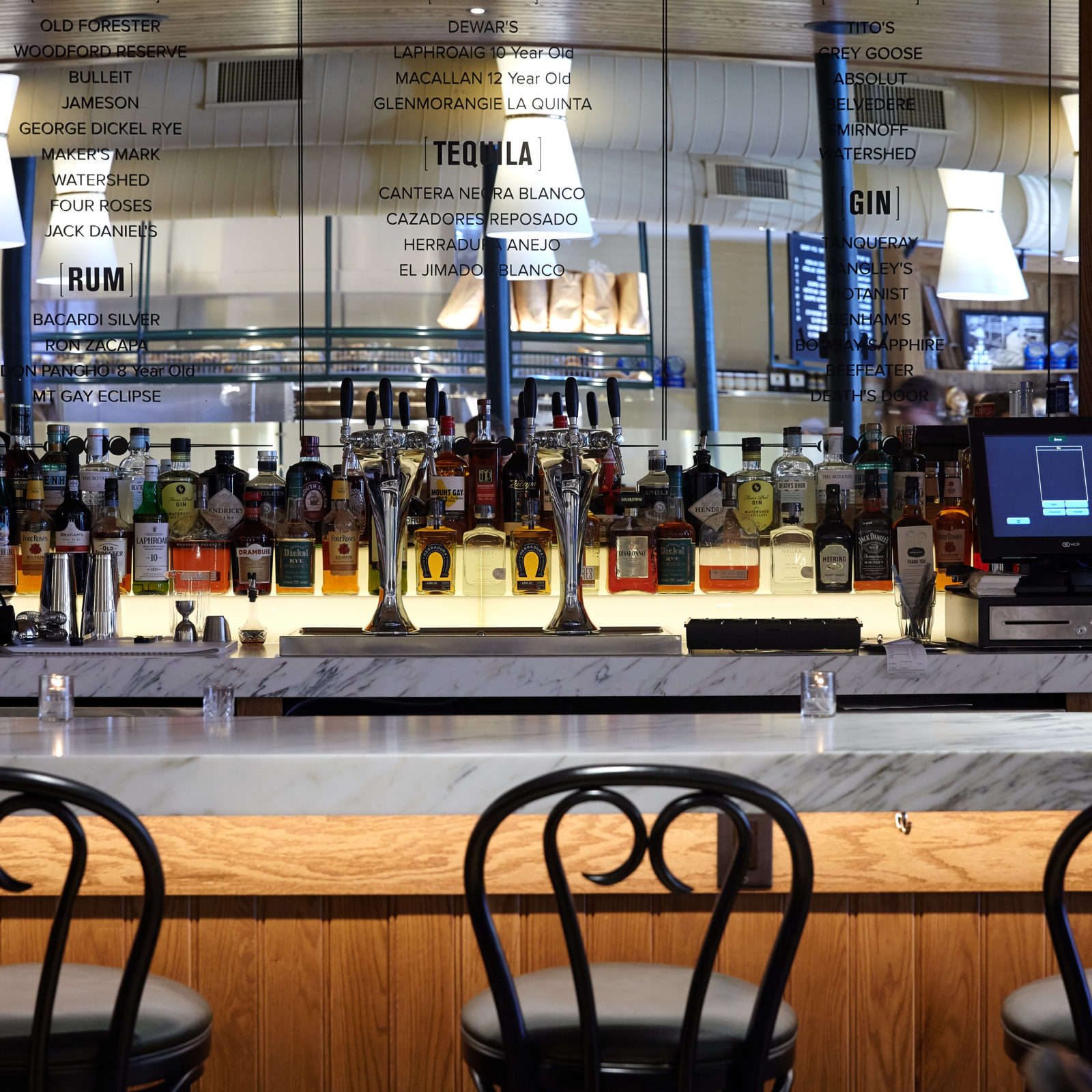 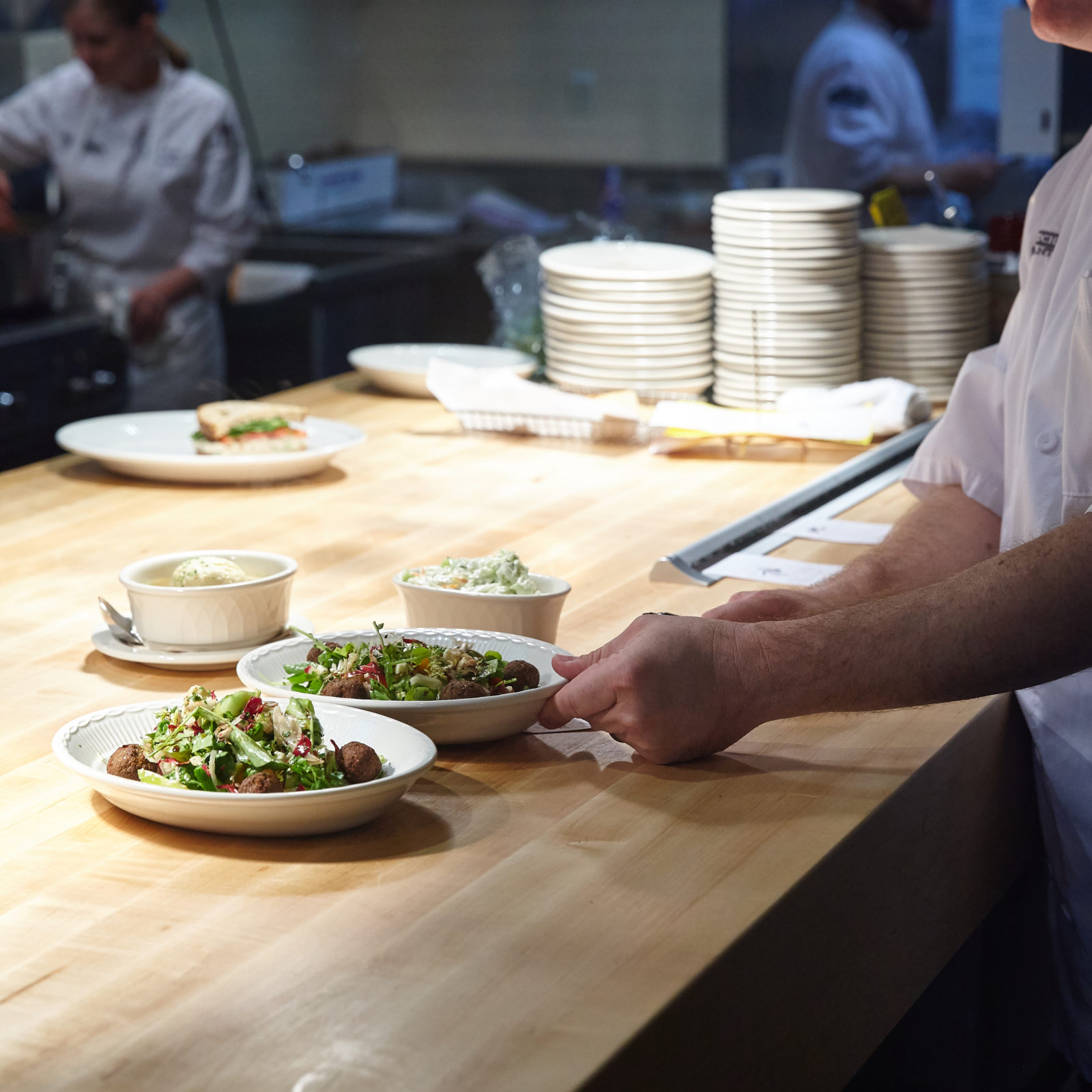 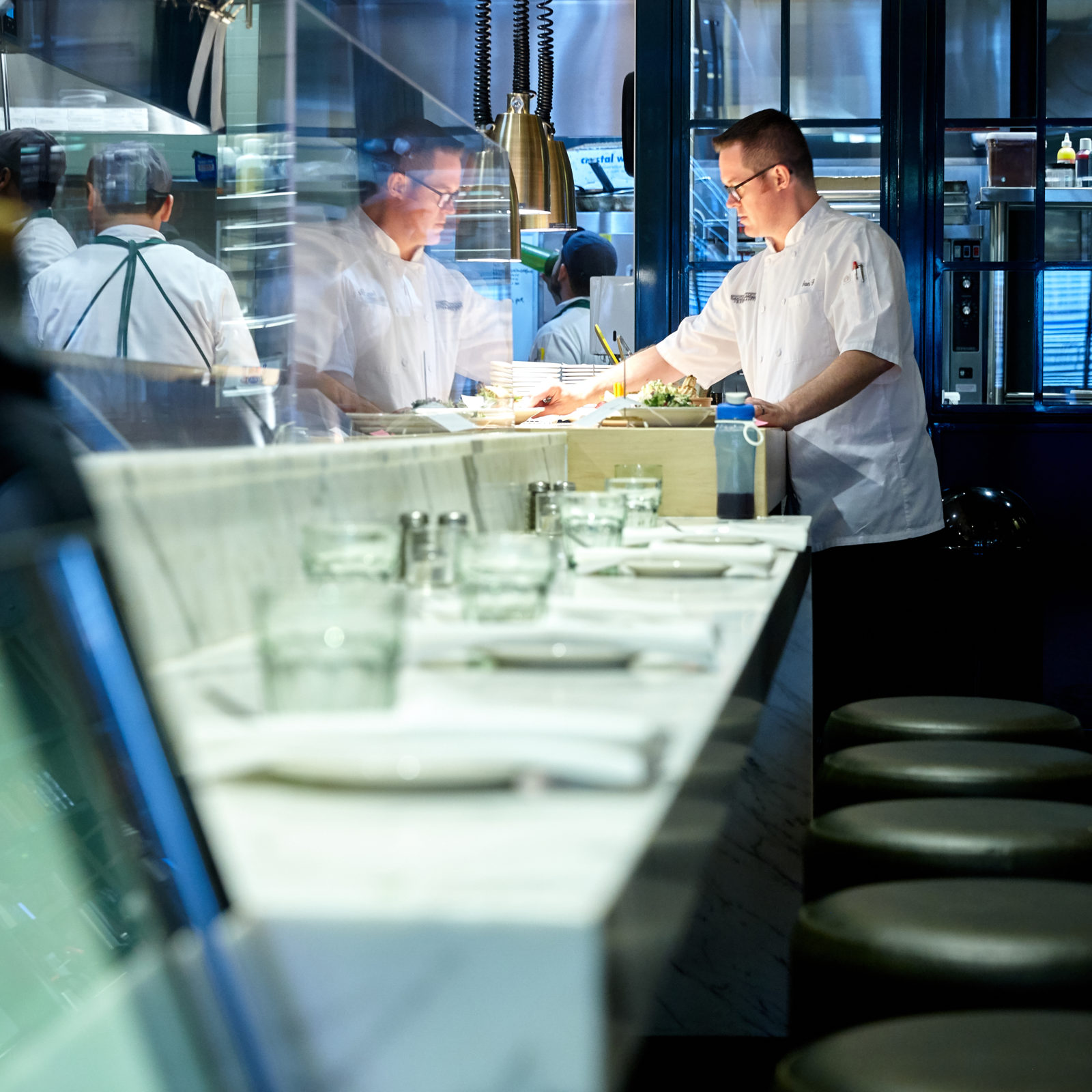 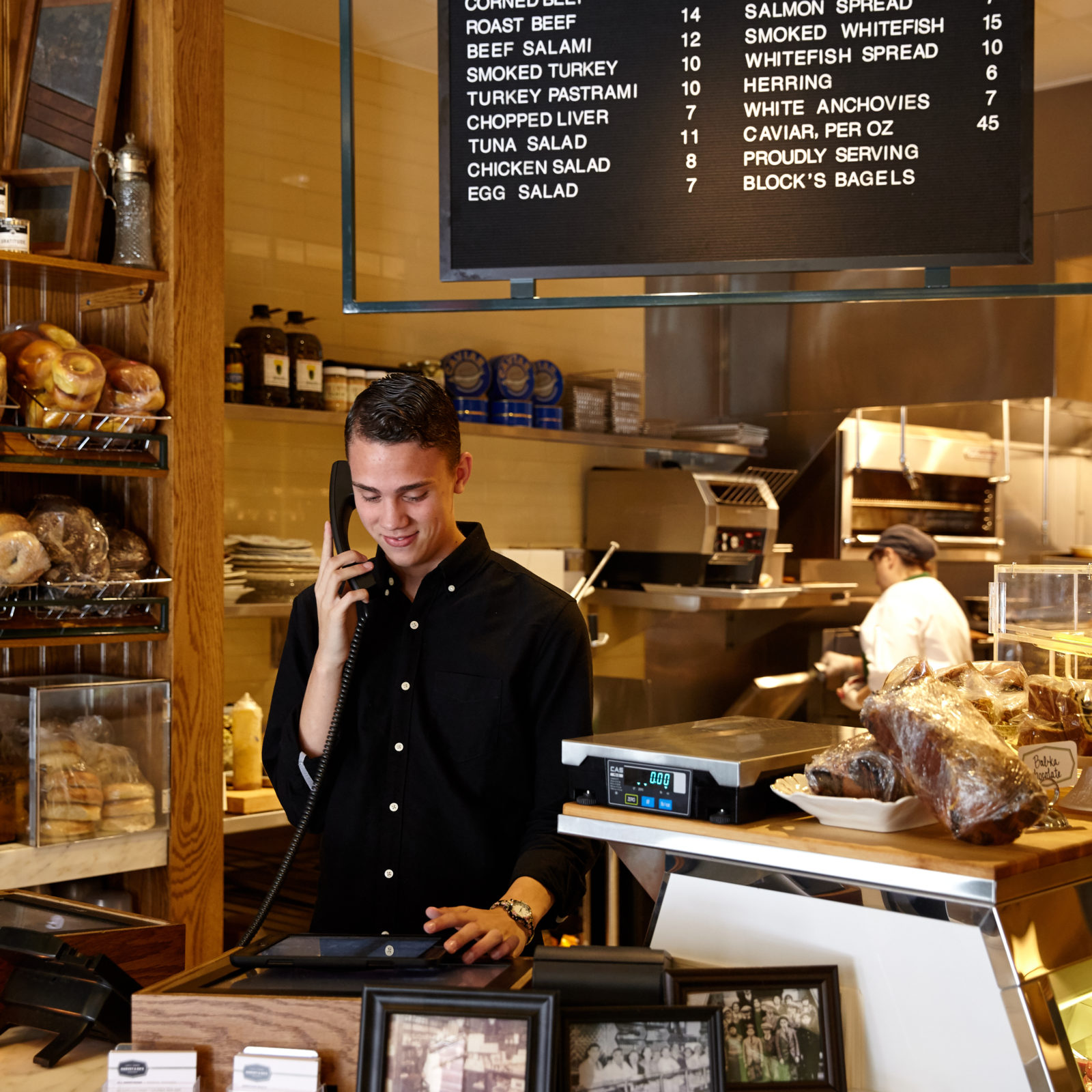 “Then we got more creative, from the Knoblewurst, which is beef sausage made at The Butcher & Grocer in Grandview, to the Pomegranate Braised Lamb,” he revealed. “Our brisket is confit. It’s so tender, you can cut it with a spoon.”

Purveyors were thoughtfully curated between authentic brands and local sources, a deliberate mix of homage and in-house.

Block’s Bagels were a given, with Matt’s Bakery and Orlando for challah and rye, and Turano potato buns from Chicago rounding out the rolls.

But the babka and pastries on the deli side are all baked in the back. 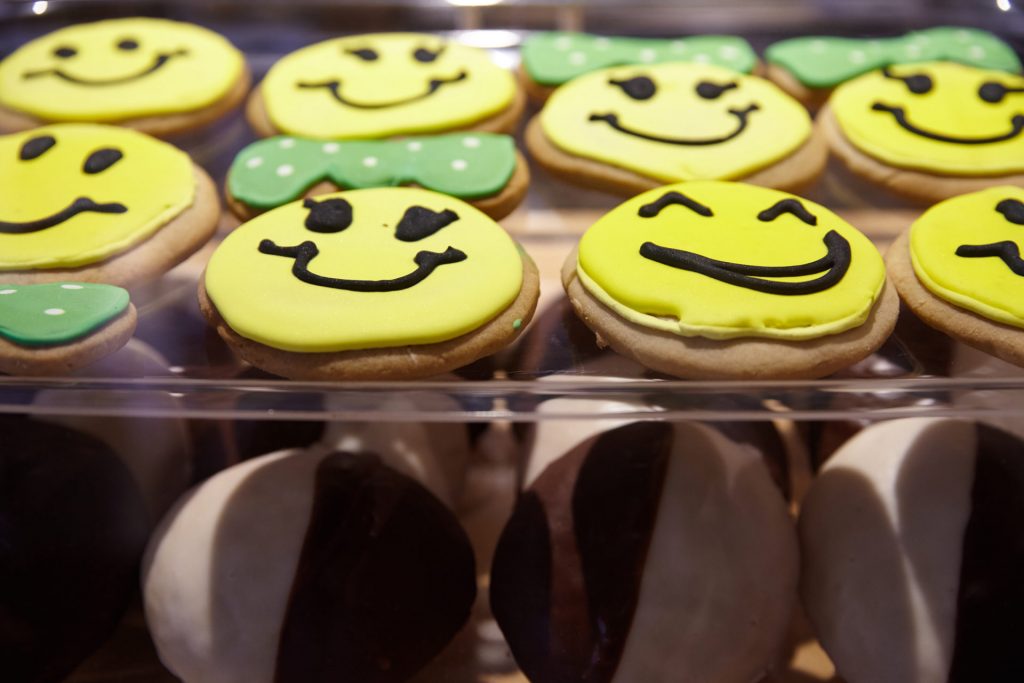 After some trial and error, Basch decided his Columbus kitchen could hold its own preparing almost all of the fish you’ll find on the menu, from kippered salmon to gravlax.

Detroit’s Sy Ginsberg is synonymous with corned beef, closer than Katz’s, and for my money, just as likely to make Meg Ryan writhe in her seat.

They’ll even put a fried egg on it if you ask. 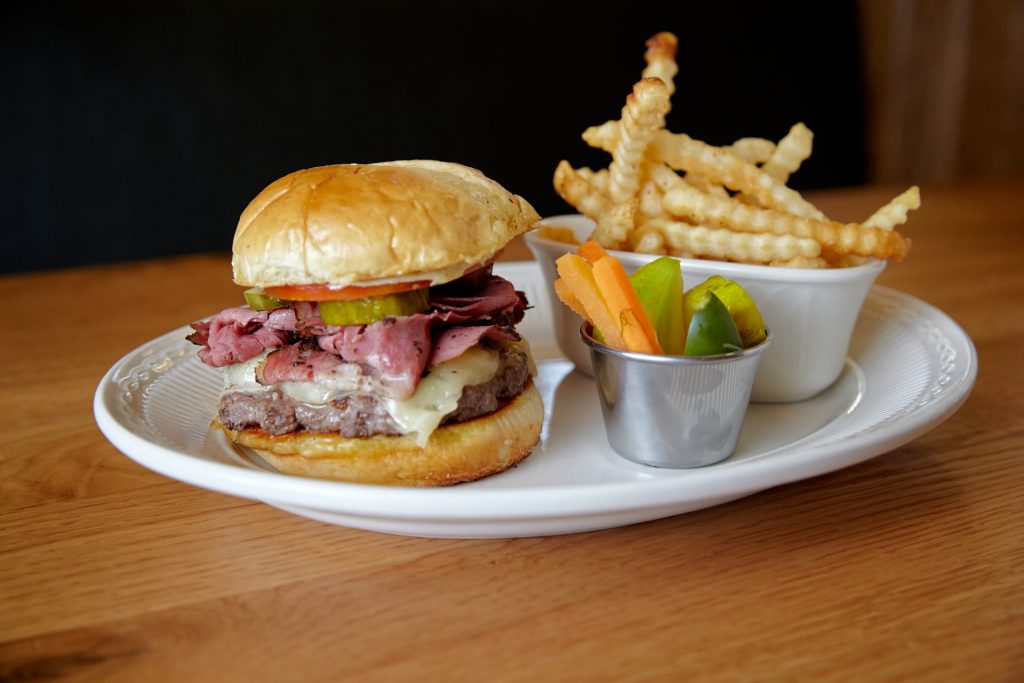 Adding a fried egg isn’t the only nod to Columbus culinary expectations. Their brunch expands the menu even further, while their deceptively simple cocktails are the thread that ties the days, nights, and weekends together.

“We don’t serve cocktails with a giant garnish and ten ingredients. We’re more spirit forward, with three or four high-quality ingredients,” explained Armstrong, with the Boozy Egg Cream served in a milk bottle with a metal straw offered as an example of the more playful, less stuffy, cocktail philosophy. “Our seven-day happy hour also includes wine and beer specials, with half-off craft cocktails and noshes as well. We wanted to be sure we reach the bar crowd and keep that a focal point. It balances the restaurant. We want Columbus to know we’re more than just a deli.”