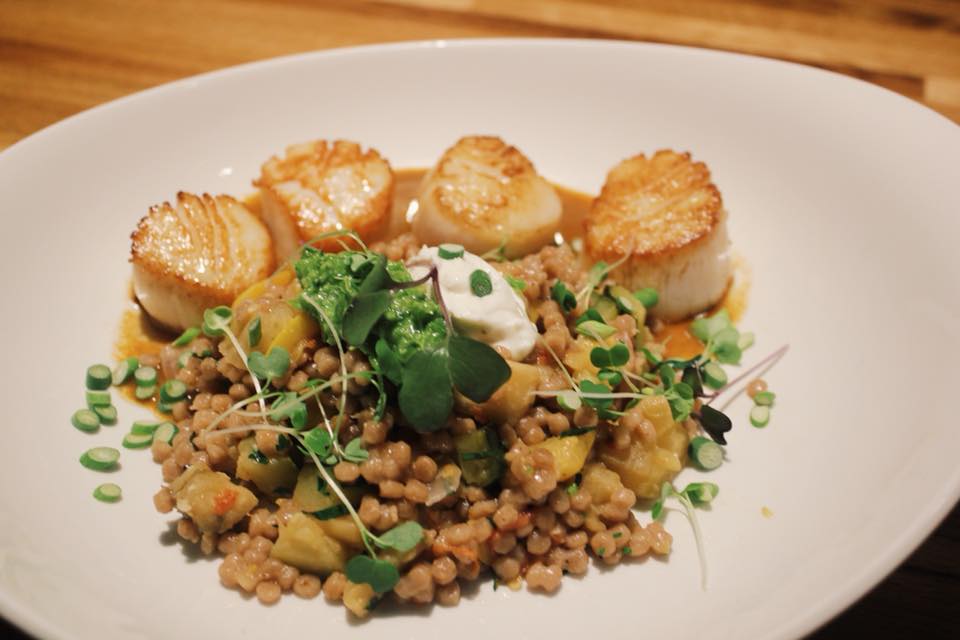 Something old and something new; who can complain about that pairing?

Definitely not us which is why we’re introducing you to Old School/New School where we guide you through a night of nostalgia and new beginnings.

Both destinations have to be within walking distance of each other and the first stop will be for dinner and the second stop for a nightcap.

Park once, drink twice, support local. Get it?

For this edition, we will spend the evening in the Old North neighborhood. If you haven’t heard of the Old North, don’t worry…it is just a term that self-important know-it-alls (such as myself) use to refer to the culturally rich neighborhood that connects north campus and south Clintonville.

We are going to plan the perfect summer date night with a trip to Trillium for diner and a nightcap with local music at Dick’s Den.

Two guys that had big shoes to fill are chef Bradley Balch and managing partner Michael Kulikowski. What did they have to be nervous about? Nothing … except for filling the shoes of famed Columbus restaurateur Alana Shock and revamping the Columbus culinary institution she ran for 18 years, Alana’s Food & Wine.

In fact the only thing Balch and Kulikowski seem anxious about is becoming a part of their new neighborhood. Fitting in in the Old North is so important that when they opened Trillium less than a year ago, they chose the name because the Trillium flower, native in Ohio forests, becomes an irreplaceable part of the habitat in which it roots.

When it comes to food, Balch, who was a former co-owner and executive chef at The Sycamore, puts an emphasis on quality food and working with local merchants in the community.

His menu changes seasonally, but his commitment to quality does not. Balch likes to work in different disciplines and enjoys serving Asian, Classic French and South & Central American Cuisine.

When pressed with the question of what to order from the menu, his answer was quick and simple: seafood.

Balch, though not boastful, is proud of the fact that the seafood he serves is usually swimming in the Atlantic Ocean only 36 hours before it is served. 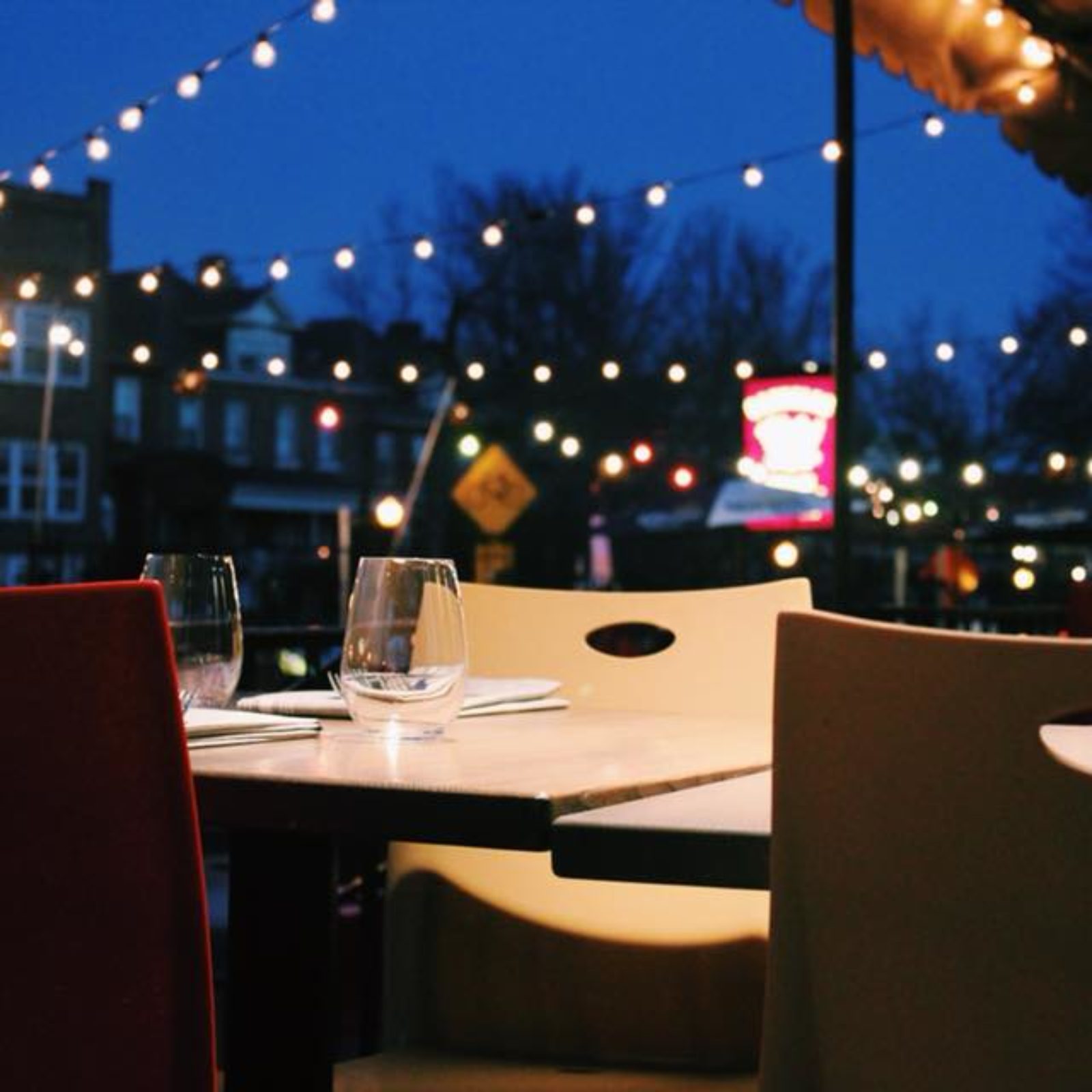 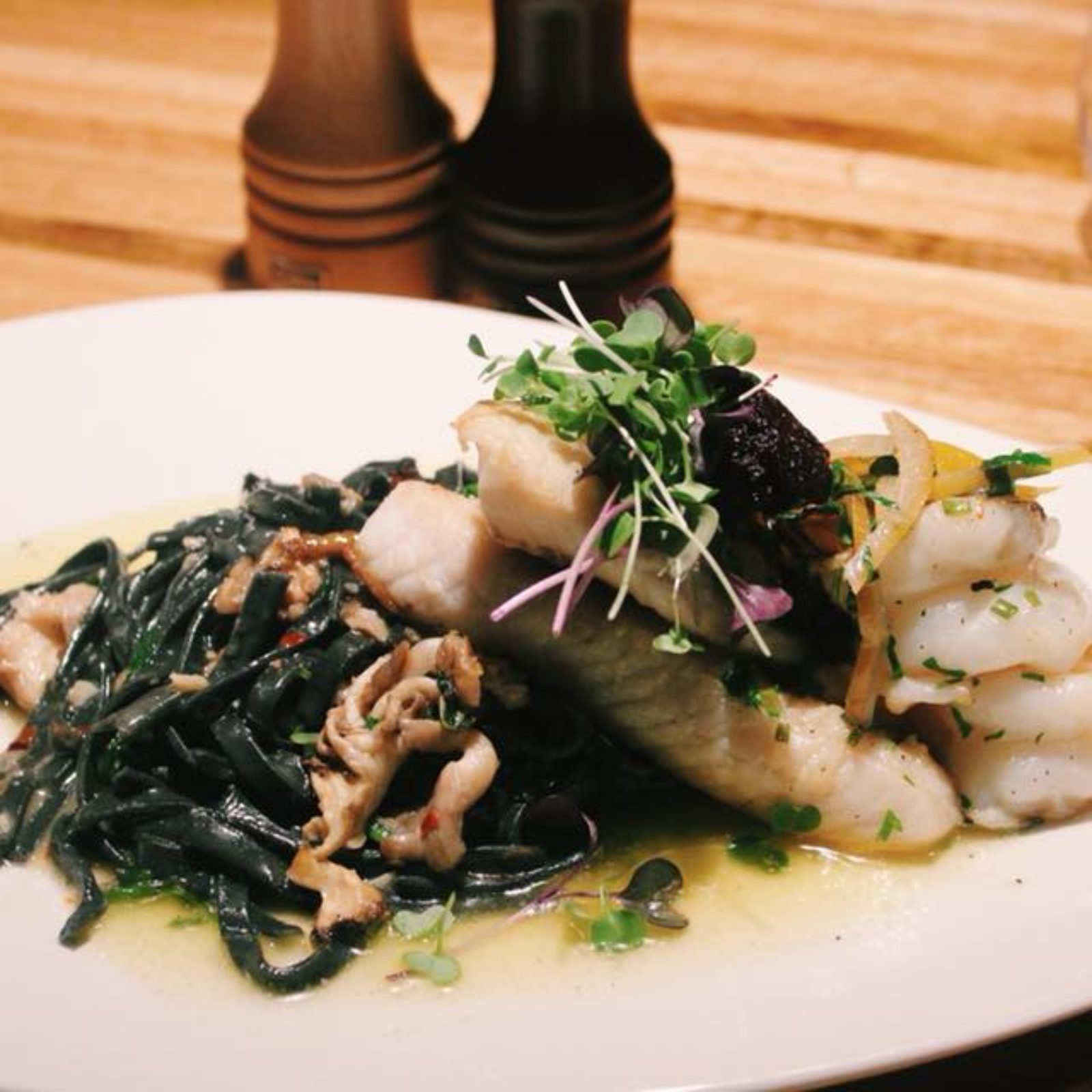 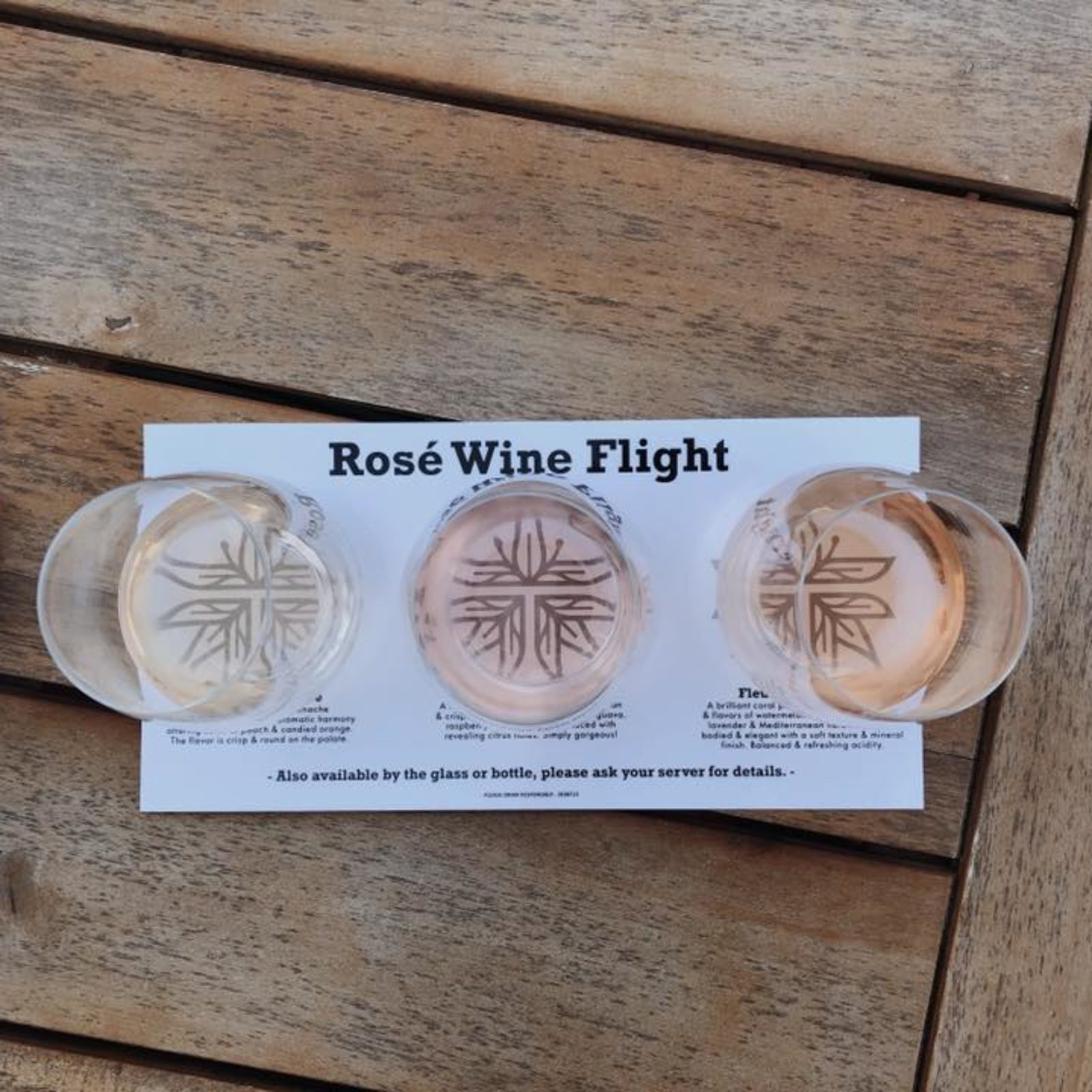 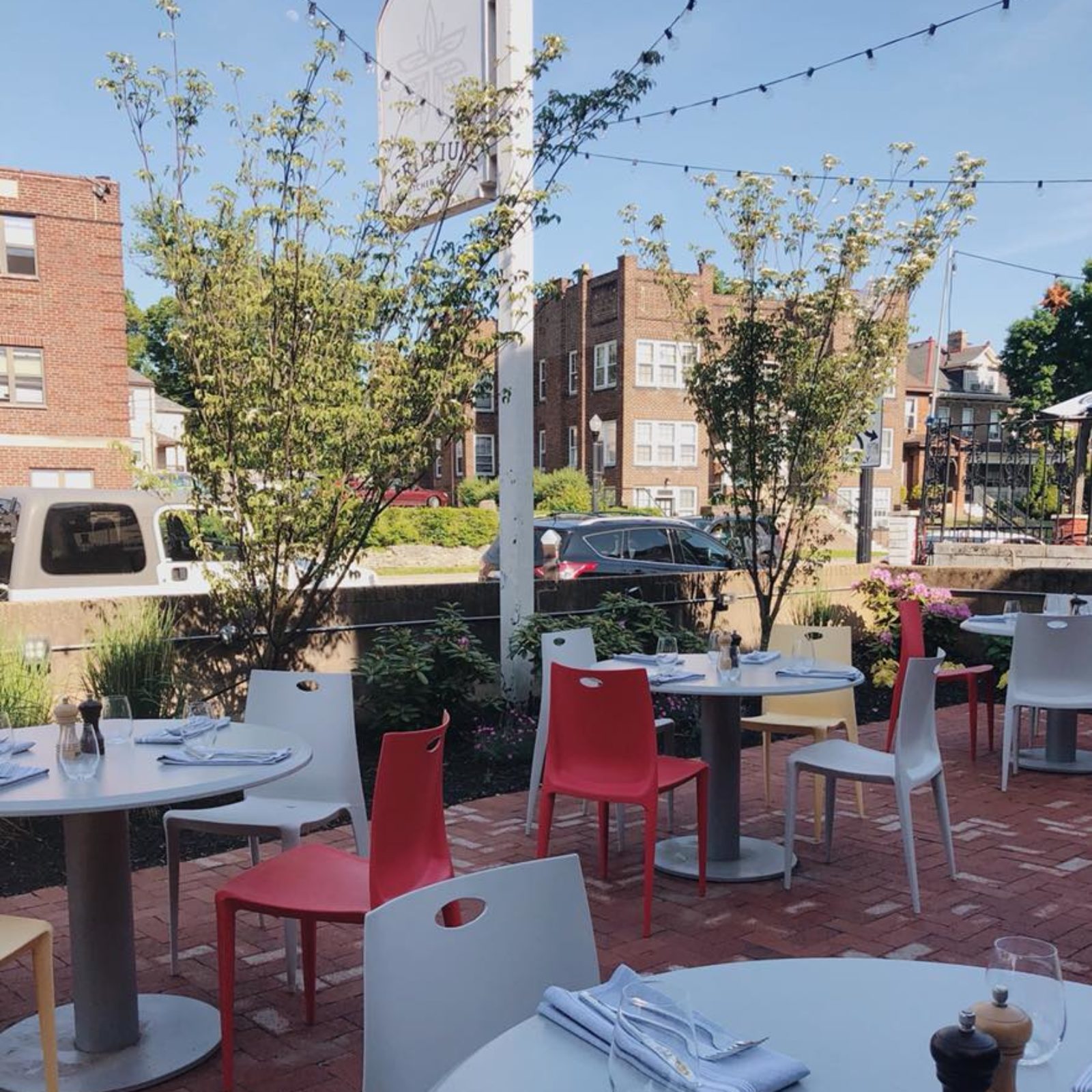 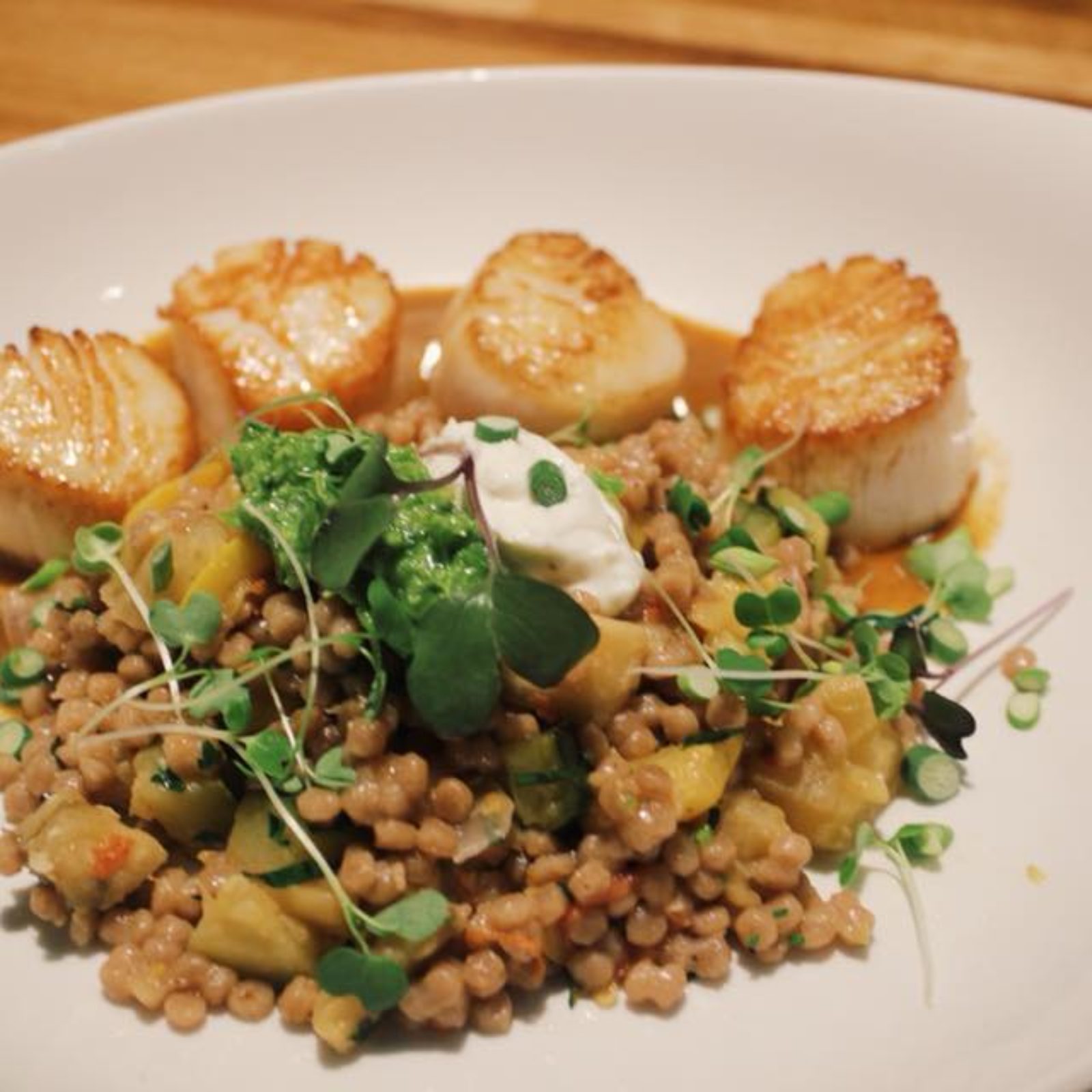 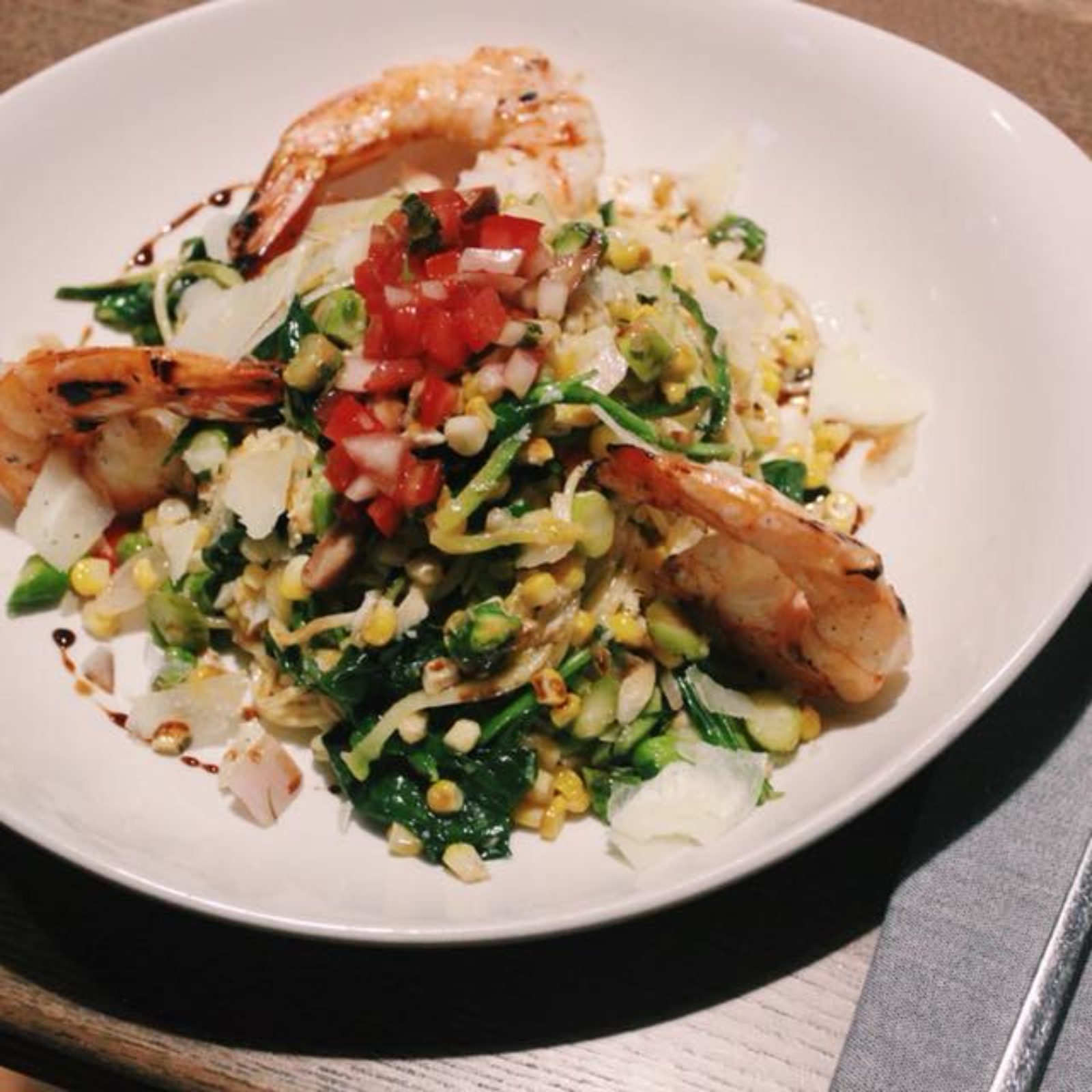 Kulikowski, the former general manager of Tucci’s (where Balch once worked in the kitchen), was more than happy to show me around the front of the house.

Much has changed and much is improved as Trillium pulls off the rare combination of staying true to its roots (get it) while branching out (If you have the time, I have the dad jokes) into the new community.

First things first: the patio—tis the season, after all—remained the same size, but needed a full ground revamp, which Kulikowski and Balch did basically by themselves.

Uprooting trees and laying bricks on July weekends is not easy work, but when you own a restaurant, you wear a lot of hats.

The hard work paid off and the spacious and open patio provides a comfortable setting to eat dinner, relax with a drink or people watch. Which, if you have spent any time in the Old North, you know is prime people watching real estate.

The inside of the restaurant is classy, cool and comfortable. A long bar runs across the northern side of the building and behind that long bar is a selection of Ohio drafts (I partook in the Four String Hilltop Heritage Lager), top shelf whiskey, bourbon, and scotch and an impressive wine collection.

If you can’t find something to drink at Trillium, maybe you shouldn’t try and be a part of the neighborhood.

Trillium also sports a wine room that is great for larger reservations and a large but intimate dining area that comes equipped with a beautiful original fireplace. Need to host a party of 20 or so solidify your baller status? Trillium has you covered there too, just give them a call.

Now that you finished your locally sourced dinner, chose a beverage from the high quality drink selection and basked in chic dining comfort, let’s switch gears for our nightcap and walk a block to the north

Frankly, far too few Columbusites I speak to haven’t been to Dick’s Den.

However, those who have visited become regulars and those regulars become lifers. Why? I think the question you should be answering is “Why Not?”

Don’t get it? Look at the neon sign in the front window.

Dick’s has been keeping it low key for the last 53 years. There’s no taps. It’s not the place where you get a Manhattan or a martini (although I’m sure you could) and when I am there, my drink of choice is a bottle of Stroh’s. When in Rome, do as the German Pilsners do…that’s my motto.

Walking in, it’s impossible not to see, listen to, and experience the history of the Old North. The walls are lined with generations of photos of neighborhood locals, families, and regulars.

My favorite photos? Those would be the photos of people celebrating at Dick’s after the end of a now defunct Old North marathon.

People sure were better looking and much cooler in the 1970s. 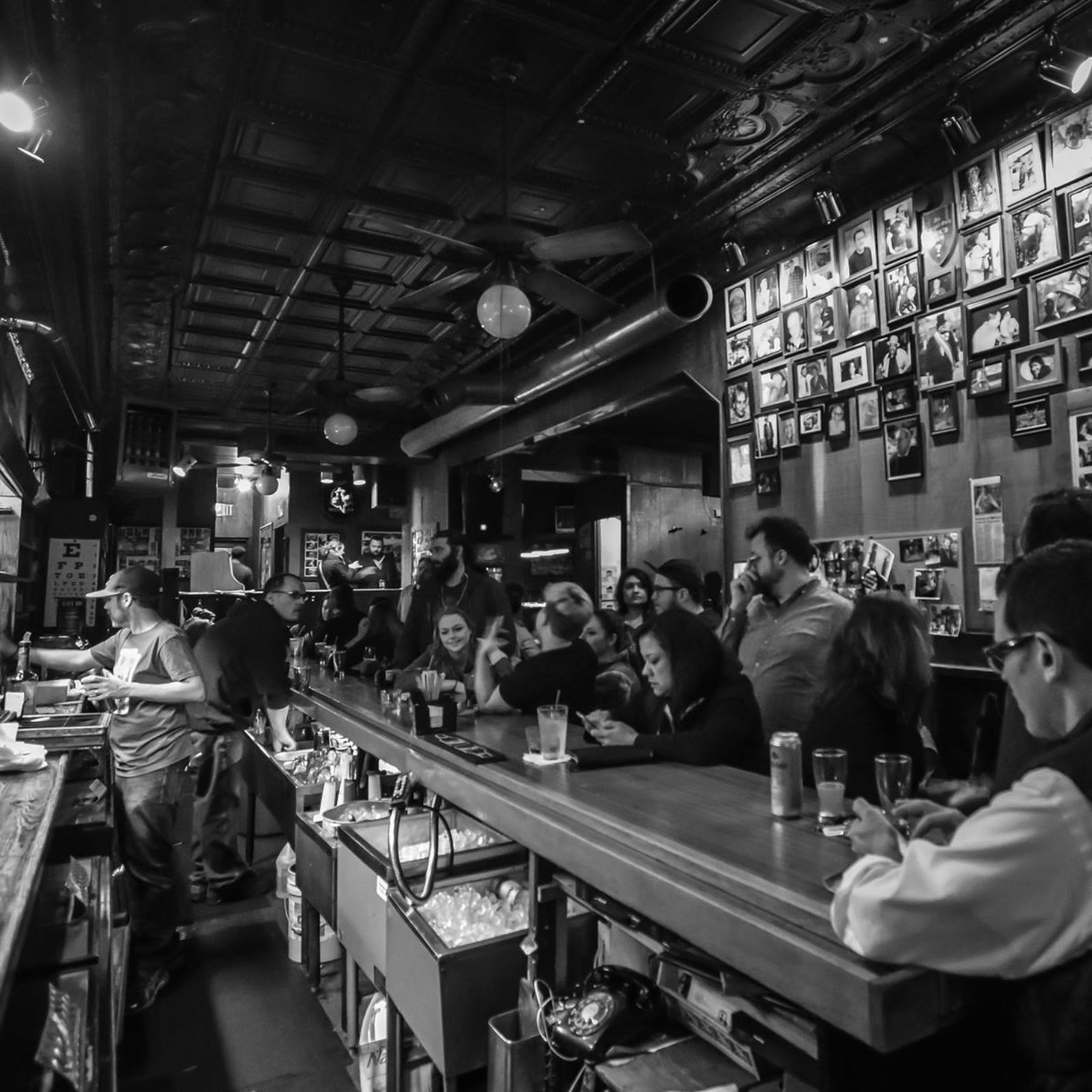 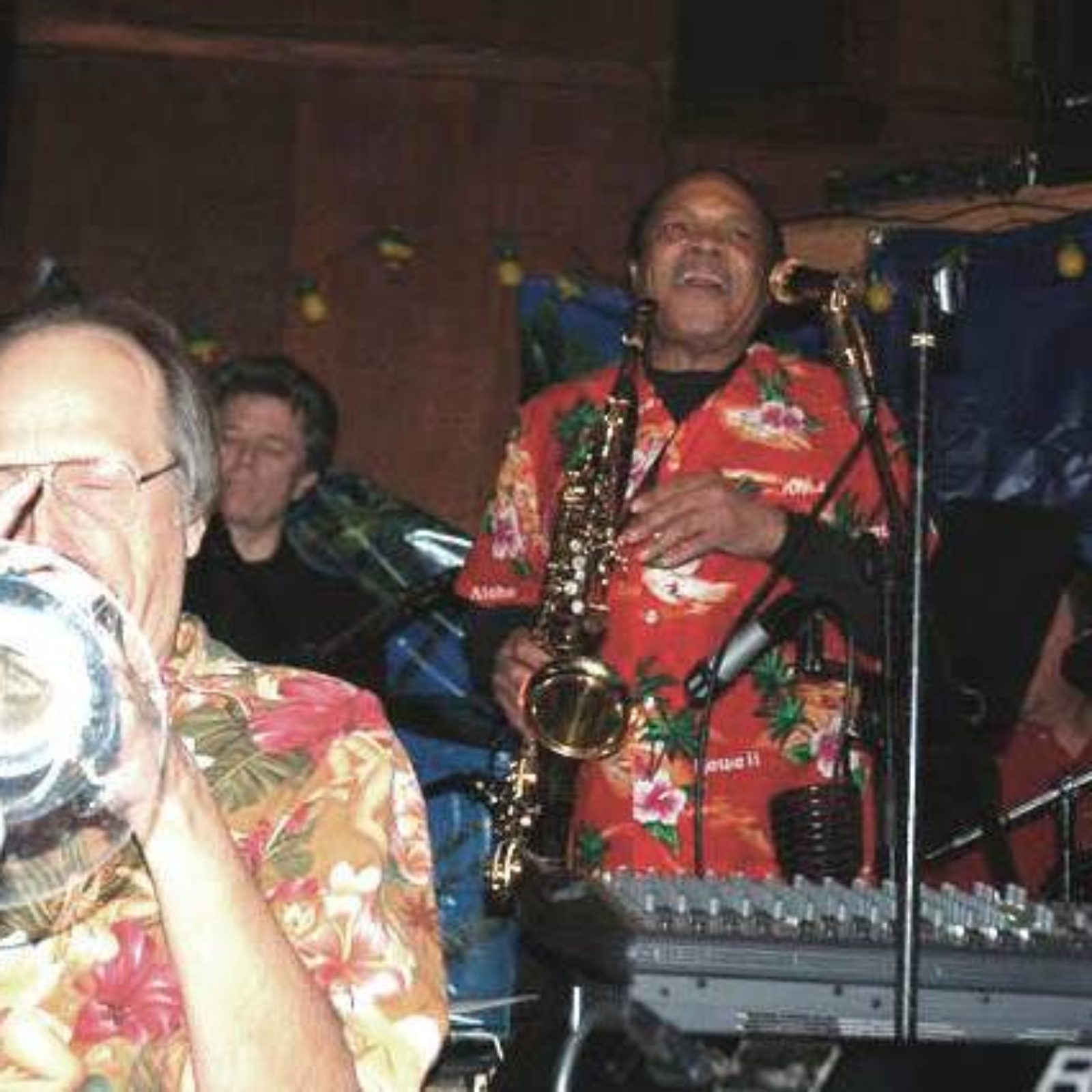 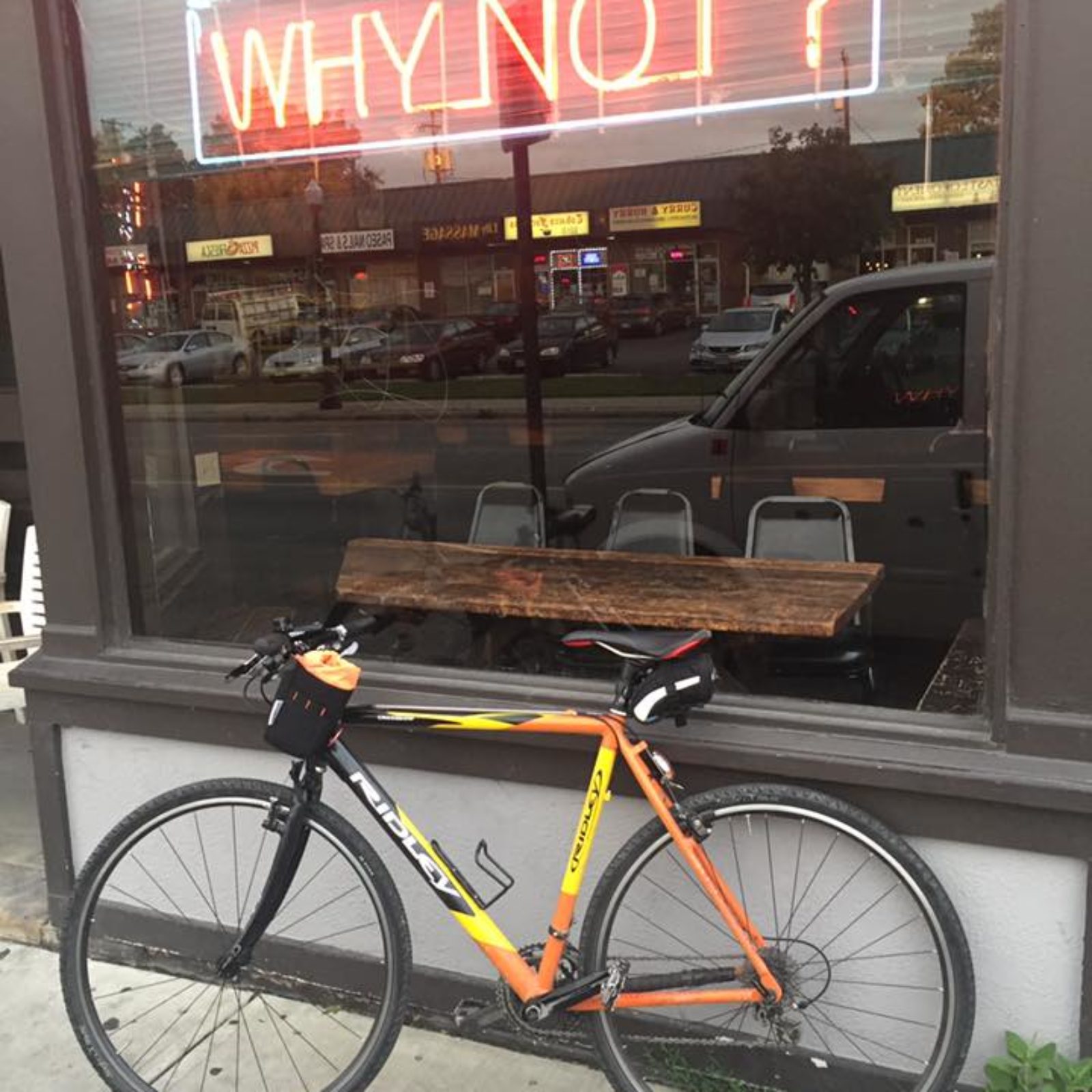 This is also HQ for Columbus jazz, blues, and bluegrass performers. Any musician who plays these genres and is worth their salt has played at Dick’s. Most nights you can watch a local or a touring band do their thing on the intimate stage in the middle of the building.

Looking for a game of pool after dinner? (This always seems to be a good idea, until one spouse gets too serious.) If so, Dick’s has a pool table in the back of the building that is great for making new friends as well as giving patrons a secluded environment to have a good time.

Dick’s certainly can lay a claim for the most super-secret pool table in town. Well Dick’s, The Library and Mac’s.

If your nightcap plans include chilling at a bar and talking, Dick’s has you covered there as well. Friendly and veteran bartenders, such as Krista and Barb, are always good for pointing you in the right direction for your nightcap, filling you in about Dick’s history, or telling you about other great establishments in the neighborhood.

Dick’s is the kind of bar where a reputation is earned and not purchased, where neighborhood retirees drink in the early afternoon and where other neighborhood regulars drink after work.

Dick’s is also the type of bar that is disappearing from this country and the kind of bar you need to support. Be a patriot, support America and go to Dick’s.

If you follow through for this date night plan, and you should, you have two different, yet completely compatible and complementary Old North experiences. Get your fancy pants on and have dinner on Trillium’s patio and then go enjoy the air conditioning, pool, bar, and music at Dick’s.

Columbus really has a lot to offer and if you don’t agree, you simply aren’t looking in the right places.

Forgetting about Memorial Day isn’t as much a sign of how irrelevant the calendar has become as compared to this following anecdote from a cherished local business.

When talking to the owner of Buckeye Donuts about its National Donut Day plans, it didn’t dawn on him until a few days ago that he needed to start preparing for the holiday. Now, Buckeye Donuts is more than prepared, assuming a 10 p.m. curfew, which will keep the 24/7 campus spot from operating out of its original pocket.

The following list consists of five places where you can get your donut fix on Friday.

A local and campus establishment for 51 years, Buckeye Donuts will again be pulling out all the stops; that is, as much as they can. Being a 24-7 establishment, Buckeye Donuts has layers of bakers on deck prepared to do big bakes every eight or so hours with all sorts of varieties and specialities to indulge in.

Duck Donuts wants to promote kindness throughout the community this Friday. Whatever way you order, you’ll be treated to a free cinnamon sugar donut, at participating locations.

Stop by any participating Dunkin’ and you’ll be given a free donut with any beverage purchase.

All week Krispy Kreme has been spreading donut kindness. If you place an order with them today, you'll receive a free donut. The promo started on June 1.

Happy National Cognac Day! We partnered up with Rémy Cointreau and local bartender, Ben Griest, from Giuseppe’s Ritrovo to present to you... the Royal Sazerac! Ben has shown us a thing or two about making speciality cocktails - today he's making the Royal Sazerac, fit for a King and/or Queen.