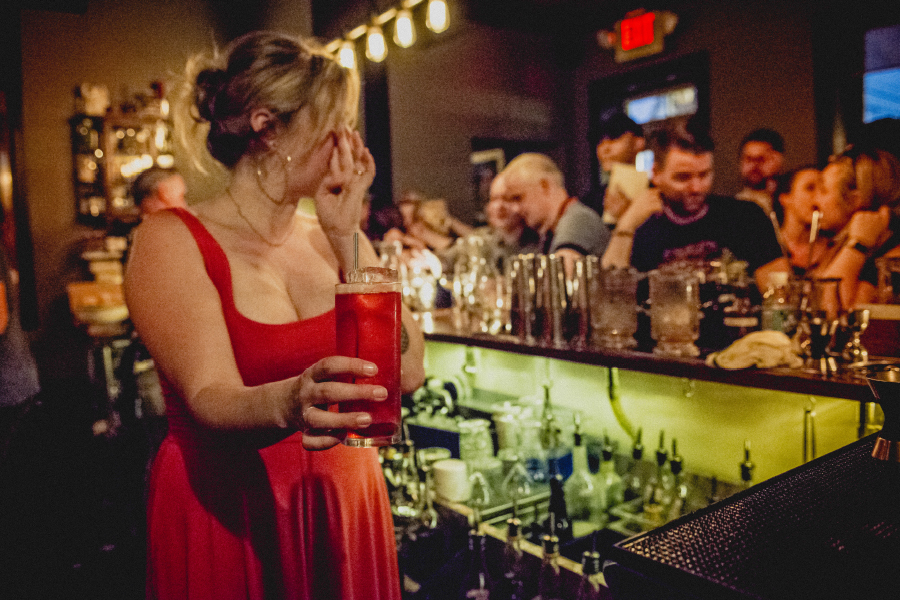 hen I was a kid, my grandfather used to spend his afternoons in a La-Z-Boy chair, a crystal highball glass atop a coaster on the table next to him.

The footrest was used exclusively for playing solitaire with a deck of cards so creased and worn that you could guess every card before he turned them.

When his glass was empty, he would hold it on top of his head and wait for whomever was up to fill it with his drink of choice, a blended scotch whisky and water.

Back then, I was far too young to know what blended scotch was, but I still remember the yellow label on green glass with the bold red letters J & B on their linoleum kitchen countertops.

When I was old enough to order a drink in a bar for the first time, I ordered a scotch and water.

I did not enjoy it.

Shortly after that I started working in a dive bar, learning and tasting on the job until I figured out what I did like, which seemed to change on a monthly basis.

A few years and a few bars later, when my fascination with complicated cocktails began, I spent my nights behind the bar in a convoluted daze of ingredients meant to signify attention to detail and mastery of flavor.

This was the new era of cocktails, and a growing number of  bartenders across the city were padding their menus with obscure pours, and house-made syrups, trying to catch up to pioneering bars on the coasts.

We would all meet for beers or visit each other’s bars, trading books and recipes and tips for how to track down hard to find bottles.

Our recipes were getting longer and harder to pronounce by the day, as we were locked in a constant battle of one-upmanship.

One night I stayed up until 7 a.m. trying to make a smoky Lapsang Souchong tea tincture work in a Scotch cocktail that already had two other smoky ingredients, just so I could print the words on my menu.

At this point, my grandfather had long since passed, which is probably for the best, because had I ever said the words Lapsang Souchong Tincture within a mile of the word whisky, he would have given me the same look he gave me when I showed up at their house with my hair dyed blue.

A complicated drink is not, in and of itself, a bad thing. A complex process can sometimes result in an elegant expression of balanced flavor that belies it’s agonizing origin.

While many of us were busy trying to cram as many components as possible into a drink, Travis Owens, the mind behind Curio, was busy analyzing, dissecting, and reconstructing each one of those components until he understood them inside and out.

While we were adding bottles to our back bars, Travis was studying directional freezing and building contraptions to make his own crystal clear ice in a small bar freezer.

I don’t mean to imply that he invented these ideas and techniques (most were gleaned from online forums, or from visits to bars around the country) or that Curio was the only bar with a quality drink in town, but the context in which Curio opened is important, and the context of the cocktail scene in Columbus was a bit muddy.

In May of 2012, when Curio opened its doors, there was truly nothing like it in Columbus, Ohio, or at least, there hadn’t been anything like it since Prohibition.

This was the era of the throwback speakeasy bar, and Curio was certainly leaning into that trend. A gleaming antique cash register, apothecary bottles on the shelves, a menu printed on antiqued paper in a font to match, and a list of “rules” later relegated to bathroom reading material).

From a top-down view of the cocktail scene across the country at the time, this little 30-seat bar was nothing new, or revolutionary.

Joints like Milk & Honey, PDT, and Death and Co. in NYC or Bourbon & Branch in San Francisco had been serving up  pre-prohibition style drinks in appropriately styled settings for a few years already, but it wasn’t the windows boarded up for dramatic effect, or the burlap coasters, or the Edison bulbs that marked the seismic shift in the Columbus drinks scene.

If you were there in that first year, you would have assumed that all of that meticulous obsessive tinkering and that seemingly endless well of pent-up creative energy, had culminated in a bar with fantastic cocktails riding the speakeasy trend. But that’s the thing about energy—creative or otherwise: It cannot be destroyed. It can only change forms.

In a way, it didn’t matter what Curio looked like, or even what drinks were on the menu. What mattered then, and what continued to matter until its final day last month, was the passion and the unwavering focus to create the best cocktail bar in Columbus.

As the scene continued to evolve, the definition of the best cocktail bar evolved along with it, and so did Curio.

If Curio in May of 2012 was the singular vision of an obsessive mind, then Curio in the following six years was the collective vision of a rotating cast of what would turn out to be some of the city’s most talented bartenders.

By all accounts, Travis was not always easy to work for, but somewhere along those late nights of scrubbing the subway tile until it was spotless, or having 15 versions of a cocktail vetoed before the final version was approved, the bartenders who worked for him began to believe in his vision and share in his passion.

As the seasons changed, so did the menus, each one more creative than the last, and each one splintering off in a new and exciting direction informed by the people behind that bar each and every night.

Curio’s strength was in its ability to transform. Slowly over the years, or in the snap of a finger as one song from their carefully curated playlists could completely change the mood, they evolved.

The quiet date night spot becomes the convivial industry hang. Slowly the music changes, slipping from Charlie Parker to Tribe Called Quest and before you know what’s happened, there’s shots, chanting, and 15 bartenders who just got off the dinner rush and sped over to make it in to geek out about spirits and bitch about regulars.

There were sides of Curio that you didn’t see. Just as there were sides I never saw. Curio was whatever bar the person on the stool needed it to be. But throughout all of this, the original ethos was never forgotten; The details matter. Every single one.

The last drink I ordered from Travis was a Japanese Highball.

It’s not the sort of drink most people think of when they think of Curio. It’s not complicated; in fact it shines in its simplicity. A mix of Japanese whisky, soda, and good ice.

A drink distilled down to its bare essence, and presented exquisitely. The way the perfect, crystal clear ice was stirred to temper it to the ambient temperature and chill the glass, the measured pour of whisky, and the sparkling water poured down the spoon to keep its bubbles intact.

While it lacked the showmanship that many expected from Curio, it was the most fitting order I could think of for the final bow of the bar that would define the modern era of drinking in Columbus.

Simple ingredients, and a simple preparation, but with an attention to detail nobody else could match.

If my grandfather were alive to sit at the bar at Curio, he would ignore the labored over menu of impeccable drinks and order a scotch whisky and water.

He probably wouldn’t notice the clear ice, or the perfectly polished glassware. He wouldn’t give the collection of rare Amari a second glance.

He would have slowly sipped his drink, and when he was finished, he probably would have put the glass on top of his head to order another.

I’d like to think Curio would have been exactly the bar he needed it to be, just as it was to each of us.

How lucky we were to be around to witness it.

Manis is a former Contributing Editor for (614) Magazine and cofounded of the HR Department, a local company that creates cocktail experiences. For more, visit historicrevelry.com.