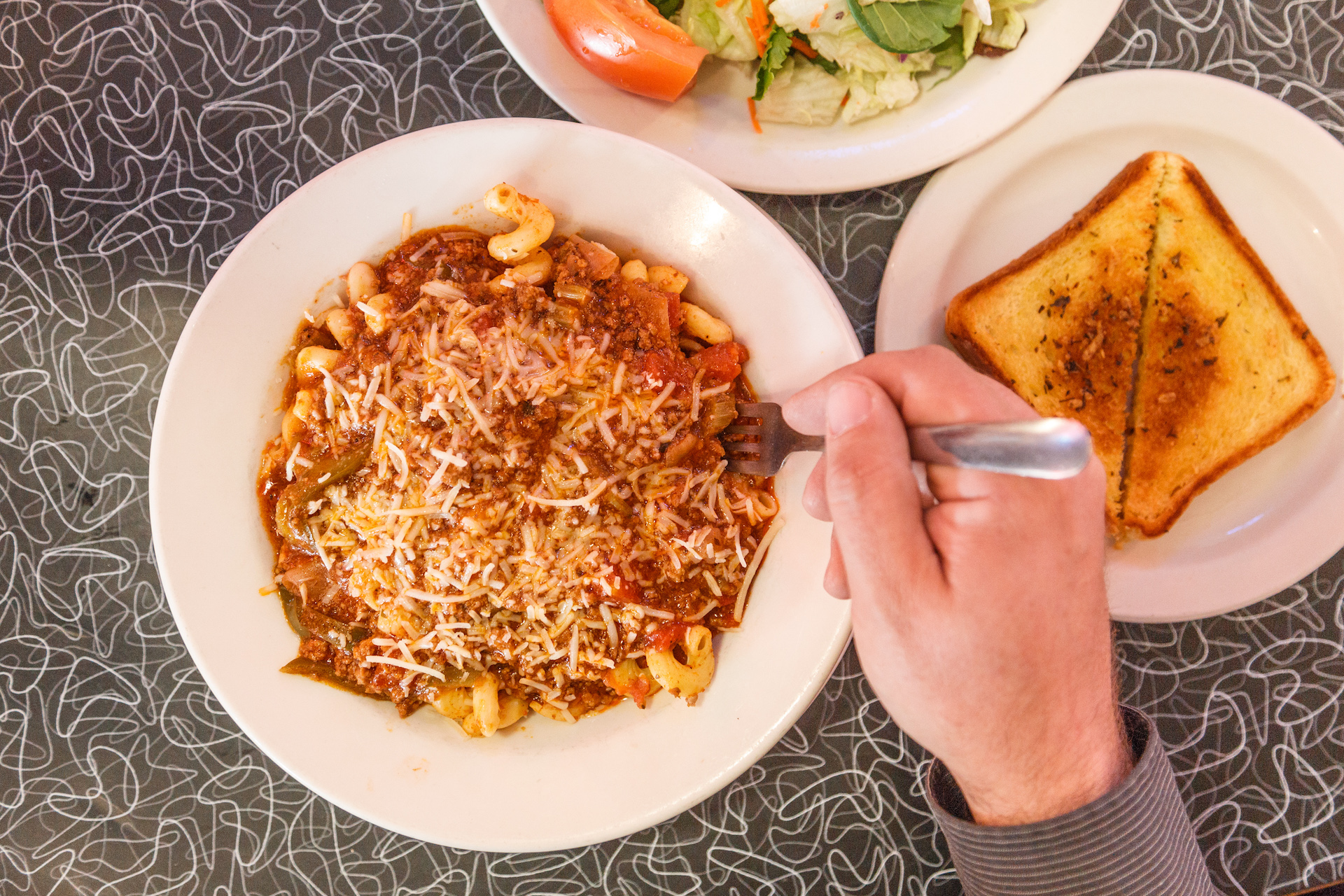 Philadelphia has the cheesesteak.

And New York and Chicago are forever at odds over whose style of pizza is superior.

But did you know Columbus has its own signature dish?

Once an outsider from the East Coast, I thought Johnny Marzetti sounded like someone who might play shortstop for Reds or halfback for the Browns. Despite this lazy lasagna’s legendary following, the uninitiated often learn about it first from new friends and neighbors who eagerly share childhood memories of the dish and its local origin.

That doesn’t mean everyone from the New York Times to Saveur hasn’t reheated the same tale of Teresa Marzetti naming the unassuming entrée of pasta, ground beef, tomato sauce, and cheese after her son-in-law, and how she served it in the family restaurant decades before the name Marzetti became synonymous with salad dressing. Even the Ohio History Connection seems to support the story.

Though the restaurant was real (two of them in fact, run by two families both named Marzetti) not a single advertisement or menu from either over the better part of a century mentions the dish. Teresa was also very real, though the company that still bears her name is equally adamant that any relation to Johnny Marzetti is likely more folklore than fact.

But that doesn’t mean folks love it any less. It kind of makes it a legit urban legend. An Italian matriarch, fresh off the boat from Florence, pulls together some modest ingredients and creates a sensation so deceptively simple that more than a hundred years later petite cuisine and molecular gastronomy still can’t beat it? Who wouldn’t eat up that story, even if the details are still suspect? It sure beats calling it the long-lost cousin of Hamburger Helper.

Johnny on the Spot

SEE BELOW FOR MORE DETAILS


Sauté onion in oil until limp, about 3 minutes.

Add mushrooms and fry until juices are released, about 5 minutes.

Add beef and cook, stirring, breaking up clumps, until no longer red.

Remove from heat and mix in tomato sauce and all but 1 cup of cheese.

Transfer to greased 9- by 13-inch baking dish and add macaroni.

Toss gently to mix. Scatter remaining cheese on top. Bake, uncovered, in 350-degree oven until browned and bubbling (35 to 40 minutes). Serves 10 to 12.

At Tommy’s Diner, like most places that secretly serve Johnny Marzetti, even though it’s not on the menu, it’s not exactly off the menu either—nor is there just one recipe. Most often macaroni, rotini, or bowtie all work just fine. Vegetables include onions, green pepper, and mushrooms. (Though I highly recommend throwing in some zucchini.) Choice of cheese seems to fall into three schools. Cheddar is the most popular, but mozzarella makes a strong showing as well. Tommy’s tops theirs with a generous portion of grated parm. Opinions also vary on whether it goes into the oven for a quick brown and a bubbly finish, or straight to the plate with shreds or just a sprinkle. Whether original or avant-garde, everyone seems to agree it’s not exactly a chili mac or just another name for goulash.

Nancy’s Home Cooking in Clintonville actually does have it on the menu, but only makes the comfort food classic on Tuesdays. Paul’s Fifth Avenue, India Oak Bar and Grill, and German Village Coffee Shop quietly rotate traditional, yet individual, versions through their daily specials. Kolache Republic sometimes stuffs it into their savory pastry to make it more portable, and Columbus newcomer ClusterTruck will even deliver it to your door. None of them have it on the menu. Service Bar in the Short North does, offering an upscale variation for $21. (That’s quite the price hike from the 45 cents Teresa used to charge at the restaurant back in the 1920s — maybe she did, but probably not.)