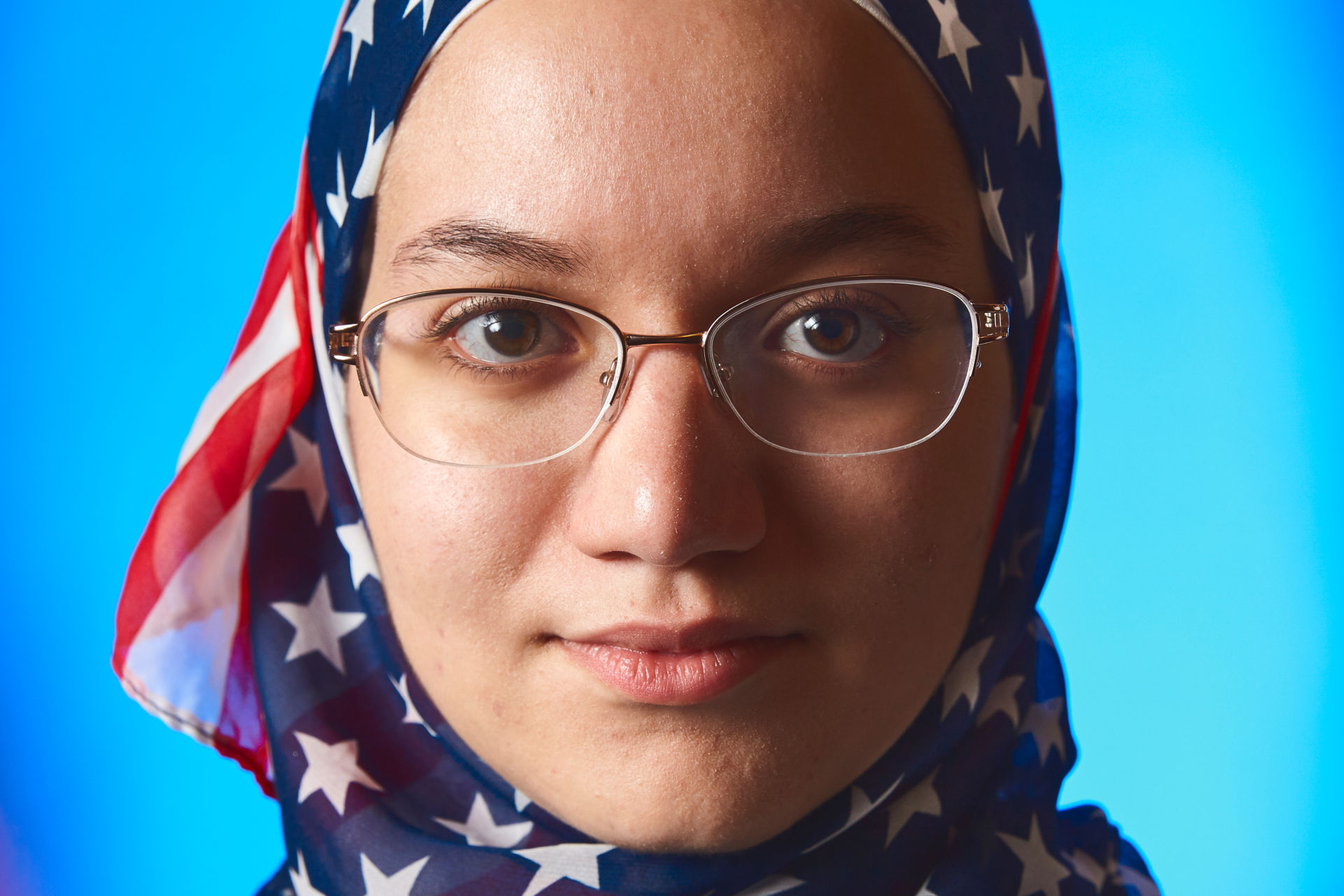 Virginia may have squashed Columbus’ dream of Amazon HQ2

Larry Smith’s six-word memoirs are an exercise designed to cut through the extraneous, and find the fundamental truths at someone’s core in a provocative, intriguing, and immediate way.

So when Sara Abou Rashed wrote the six-word sentence above at a workshop for teens led by Smith at the Thurber House in 2015, he knew he had found someone special—but just how special, was still yet to be discovered.

Smith later caught up with Rashed at a TEDX talk.

She had won the 2015 Ohio Poetry Association High School Contest, a mere two years from arriving in the country from Syria and learning English. Smith began to work with her as a storyteller, and discovered the extent of her remarkable gifts for narrative and poetry and for holding an audience.

“I was like, ‘Oh my god, you’re amazing. You are a brilliant storyteller,’” Smith gasped.

Smith and Rashed began a journey that has culminated in a new venture for both of them: a 70-minute play/story written and told by Rashed, and edited and directed by Smith.

A Map of Myself is Rashed’s remarkable exploration of her identity and her search for home: reflective, dramatic, humorous, revolutionary, and hopeful all at once.

Now Smith and Rashed’s creation, which began with a meeting at workshop, has become a workshop and educational piece in itself. The story has found its home in the capital city.

“In the end it’s a Columbus thing,” said Smith. “If you have a good idea and you work hard, people want to help you make your vision come true.”

In the audience for Rashed and Smith’s first show last month at King-Lincoln Theatre, we did our own reflection on how Rashed’s narrative has been shaped by country, city, and and her many cultures.

“Where are you from?”

Identity and belonging are fluid…I’m a Palestinian-Syrian-American. In Syria, I was Palestinian. In Palestine, I wouldn’t be Palestinian because I never lived there. And I only became Syrian coming here, to the U.S. So this is why I say it is really fluid, and it’s more complicated than “Oh, I’m from here.” So I think that’s something really cool to explore, just how intermixing with another country redefines who you are.

“There are mean girls everywhere.”

Through living in different countries, I have come to realize that the same exact people exist in those different countries. They just speak a different language. I see people here, in America who speak English who are blonde or whatever, and they remind me of people I’ve known in Syria.

They look nothing alike, but they have the same exact persona, same charisma, same movement, same walk, same talk.

I would look at my mom and I’d say, “Doesn’t she remind you of so-and-so?” That there are mean girls everywhere—it’s so universal because in each of those countries the same culture, the same people exist. 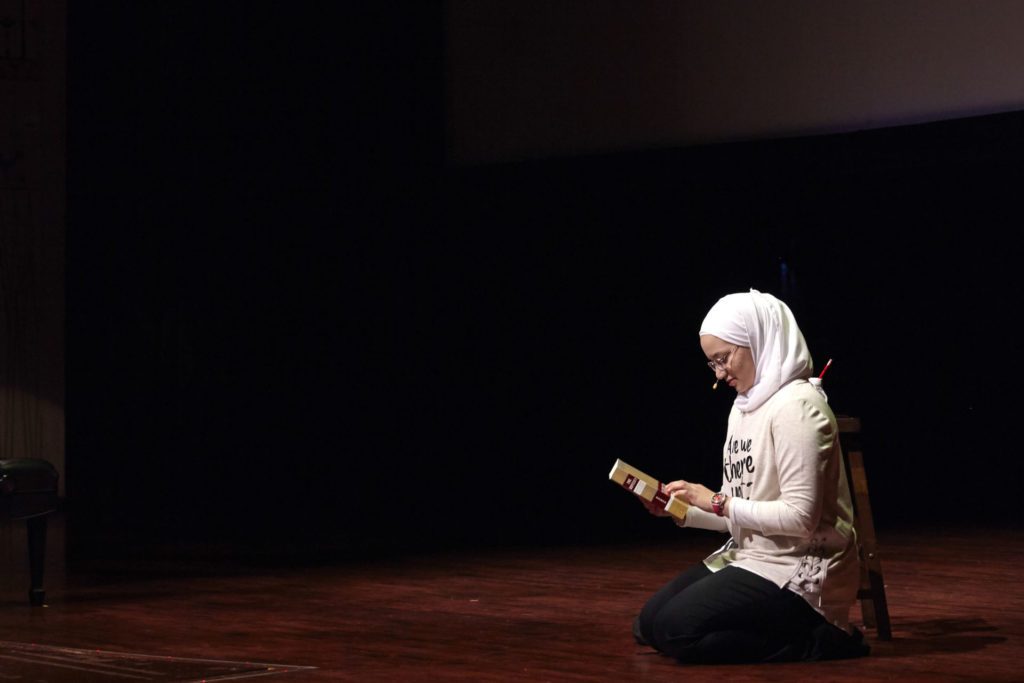 “For love alone we have 14 words to describe its many stages. Now like me, you would probably think love is just one stage—right?—love being a bitch.”

So each verb that there is in English to describe that, like “I fancy that person, I like, I love, I adore, I’m infatuated,” we have 14 of those, and all of them make up love—almost like a matrix. Like, how exactly do you feel about that person?

“Word for word I translated The Odyssey.”

I remember a lot of learning English and I truthfully just sat down and translated every single word, and I would keep playing it on Google Translate and I would repeat the word after it.

And then the next day we’d discuss it in class and listen to how people would pronounce the word and I’d try to pronounce it that same way. And that’s how I learned English.

It helped that I was young—I was 13, 14. It was a very, very painful process. I was really sad through it because I always felt like I didn’t do good enough or I wasn’t learning as fast as I should be, because I was held to the same standards as American students…I worked twice as hard, maybe more to catch up. I learned hundreds of words per day.

“I’m an immigrant not because I want to be, but because they keep reminding me I’m one.”

No matter how bad it is, no matter how poor, they were happy being there. So the idea of immigration—at times it feels like an insult. They’re like, “Oh you’re an immigrant,” like you’re one of those people who leave and they want better things and they’re after a better life and they want freedom.

But you know, it’s really all in our heads. Every country has freedom to an extent. So it’s not that the immigrant is trying to suck the sources and life out of the host country they come to.

It’s that they’re really miserable being immigrants. It’s not a fun thing to be.

“I’m not perfect, but my religion, like all religions, is, and I’m proud to be a Muslim woman.”

I find religion to be perfect at the core, what it’s trying to do.

Ultimately, all religions have the exact same goals: kindness, forgiveness, community, love. So it sounds really counterintuitive that religious people of different religions would hate each other.

A Map of Us

For Columbus influencers in the audience, Abou Rashed’s show was a reflection of country and community. Their thoughts:

I don’t know how she did it. Sara Abou Rashed and I have very little in common. But through A Map of Myself I found myself in her shoes, in her head, and in her heart…and left with her in mine.

Based on the response of the audience, it was a shared experience. That she is standing there, speaking perfect English, accomplished beyond her years or any expectations of her as a new American is worthy of an audience in and of itself.

However, it is the comfort and discomfort she so freely shares, and the grace with which she navigates both the pain and passion of her life so far that brought the room to its feet. Sara’s map led her to Columbus. We are all better for it.

Being able to see her story in action was both moving and inspirational. Her story is powerful, and to see the way she brings it to life is equally explosive.

By wrestling with language, it is through her art that she has now given birth to a new language, one that invites us into her story, her world, but also the world of so many in our community.

I am so thankful that she is in this community and that we can wrap our arms around her the way that she has woven her heart into so many of us. She is a voice for those who do not have voices.

Sara Abou Rashed is one of the most powerful voices in America right now. Her story—coming to America from Syria, teaching herself English by translating every word of The Odyssey, and becoming such an accomplished poet and storyteller before graduating high school—is one that every American can either relate to or should hear.

In the show, she asks: What does it really mean to be home? She helped me understand that I never had to question it. Even though I moved around a lot as a kid, I always knew my home, always found a place of acceptance. It’s a question so many of us have never had to think about profoundly as Sarah, her family, and so many other seeking refuge in America. •

Abou Rashed will present A Map of Myself again November 7 and 10, both at 2 p.m. at the Columbus Museum of Art. For info and tickets, visit mapofmyself.com. For more about her and her work, visit sarathepoet.com.