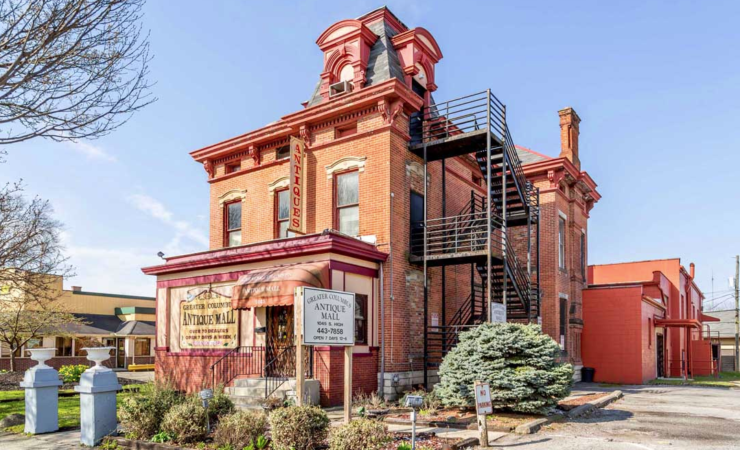 Let there be light: 7 of our favorite illumination spectaculars

Update: The Greater Columbus Antique Mall at 1049 S Front St. has been saved!

The formerly endangered building was in jeopardy of being demolished and replaced with a drive-thru restaurant—a project proposed by Schiff Properties.

“We are really pleased with Schiff Properties’ decision to not pursue the Antique Mall site for their project, and we thank them for listening,” wrote Columbus Landmarks Foundation on Facebook. “We also thank everyone who advocated to save this building and keep it in place.”

10/31/2018: There may still be hope for one of 2018’s most-endangered buildings if the Brewery District Commission accepts a developer’s new plan.

The latest plan for the Greater Columbus Antique Mall at 1049 S. High St, calls for relocating the front portion of the building to a grassy lot a few blocks to the south and demolishing the back cinderblock portion.

This, according to Schiff Properties, would allow for commercial redevelopment of the site AKA a drive-thru restaurant.

A non-voting conceptual review is planned for the new proposal.

Earlier this year, Schiff Properties suggested leveling the whole building but ended up tabling the application.

Columbus Landmarks continues to work on preserving the Greater Columbus Antique Mall as they believe it is an important artifact in Columbus’ history.

Before it became an antique mall in 1979, it was owned by a soap and candle-making Bavarian immigrant.

Then, it switched hands to a family member in 1924 and became Woodyard Funeral Home, and later Hughes Funeral Home.

Fun fact: It is said to be haunted by a “gentleman with the handlebar mustache” thought to be the original owner or an embalmer during the building’s funeral home days.

Read more about the building here.