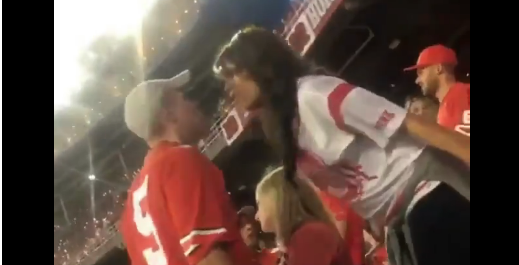 One person made us ashamed to be a Buckeye and the other made us proud in an 8-second Barstool Sports video that’s gone viral.

The scene was an Ohio State football game and the characters were a fighting couple and heroic bystander.

The video opens with the couple getting in each other’s faces—not completely out of the ordinary after a long day of boozing (presumably) and during the heat of the game (obviously).

But then, the guy spits in her face.

She quickly fires back with a slap.

From out of the corner of the frame, a second female emerges and shoves the spitting guy off the bleachers.

The crowd parts a bit to make room for the falling guy to hit the cement and metal below as the second female hops on a seat to deliver a few cutting lines about not spitting on women.

As of Thursday morning, the video has 12.3k Retweets and 57.2k likes Likes

The moral of the story: Life comes at you fast, especially when you get caught on camera spitting in a woman’s face.