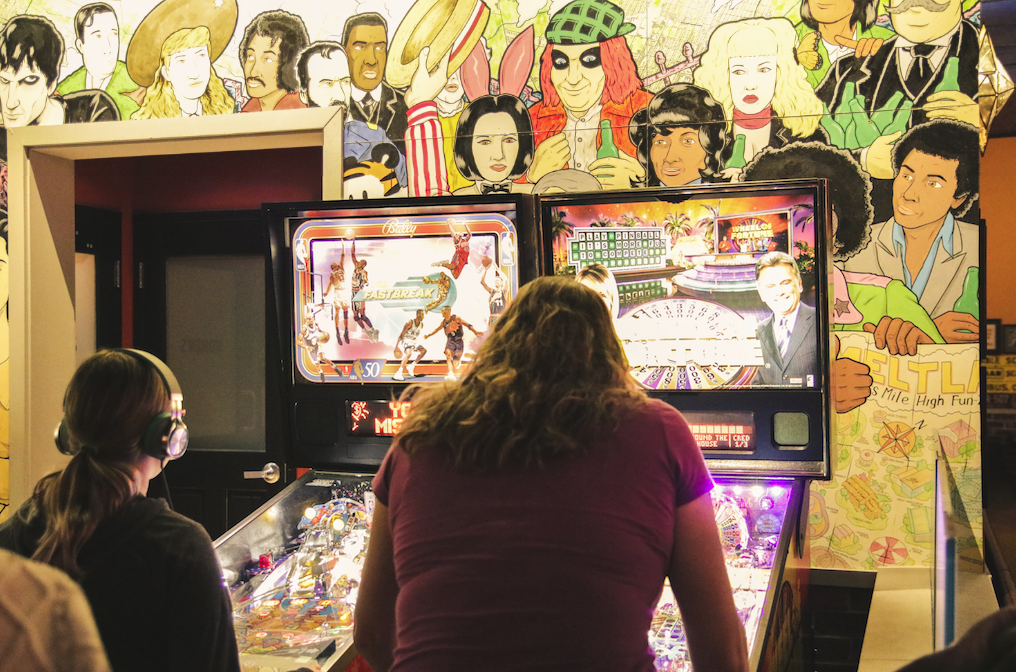 There’s still something rebellious about that little silver ball.

Just ask John Geiger, founder of Arcade Super Awesome, whose pinball obsession heralded a local revival of the once-contraband contraptions. Historically maligned by moral crusaders as another form of gambling, even outlawed in some cities during the Prohibition Era, the recent rise of so-called “barcades” is an apropos postscript for the birthplace of the temperance movement.

“I grew up in the arcades in Cleveland playing video games, but pinball was spotty. In the small towns outside of Cleveland, pinball was still illegal into the 90s,” Geiger recalled. “So I never really played pinball as a kid. But when I came to OSU, it was all over campus. That’s when I got the bug.”

An avid collector of classic and contemporary arcade games, the pivot to pinball inspired League Super Awesome, a weekly competition attracting world-class talent, now celebrating its 15th season and a new home at Melt Bar & Grilled in the Short North.

“Even going back to the early 90s, there were a lot of tournaments in Columbus. There’s an organization called the IFPA, the International Flipper Pinball Association, which is our governing body. If you look at the player numbers in Columbus, which indicate when you joined, you’ll find player numbers in the teens and 20s,” he explained. “My number is more than 20,000. That’s how long and how popular competitive pinball has been here.”

Much as disco begat breakdancing and video games supplanted pinball, console games nearly killed coin-ops altogether. But the social component they never replaced has been recently rediscovered by players looking for something Sony and Microsoft don’t sell.

“Pinball is more fascinating to me as a machine. The play is more complex and there’s that factor of randomness,” he revealed. “With arcade games there are patterns that repeat, but pinball has elements of skill and chance. It’s never the same game twice.”

Rube Goldberg would revel in the modern pinball movement, the clever combination of lights and kinetics elevated into a performance art exhibition open to anyone with a spare quarter.

“I’m very particular about curating games together by depth, style, theme, or era. There’s an order everyone doesn’t always see. It’s like a gallery and the placement of the paintings that only makes sense when you see them all together,” he explained. “You can have a collection of things, or you can have a gallery. But it wasn’t an arcade until I opened up my warehouse and people came to play.”

Geiger has been colonizing ever since with enclaves of pinball machines and arcade games throughout Columbus. But, the decision to wind down his space above Yellow Brick Pizza in Olde Towne East, followed days later by the surprise closure of Four String’s westside brewery and Grandview taproom left casual patrons and competitive players nervous about what was next.

“People contacted me worried about where we’d land. It was entirely unexpected, hearing how much they appreciated this community we built,” Geiger recalled. “But I also got a call from Don Johnson, who is kind of my counterpart in Cleveland, organizing league play and the pinball and arcade convention up there. He connected me with Matt Fish, the owner of Melt, and it was a perfect fit.”

There are lots of stories about how surprisingly small Columbus can be, and this is one of them. Geiger and Fish quickly figured out they both used to be in bands together in Cleveland decades ago. Never the same band, but definitely the same scene. And over the course of my own conversation with Geiger, we discovered the offices of our respective tech startups were right across the hall from each other nearly as long ago in the old Weisheimer Mill that was the birthplace of Arcade Super Awesome.

“Pinball really fit our punk rock brand,” explained Fish, whose burgeoning Ohio-born empire of grilled cheese eateries first expanded into the Columbus market in 2013. “Last year, Don approached us about putting pinball in a couple of locations in Cleveland in some of our unused space and hosting league play. Now we’re part of that community in Columbus.”

The ample waiting area created for Melt’s robust opening crowds received a retrofit. New electrical lines were required to provide sufficient power for more than a dozen games, with plenty of room left for league nights that often attract enough players from around the state to rival the number of restaurant patrons.

“League Super Awesome brings in players from all over Ohio. I’ve seen the same players from Columbus competing in Cleveland the following week,” Fish noted. “Between Cleveland, Columbus, and Cincinnati, we have one of the largest pinball communities in the country. Most people don’t know Ohio has the highest number of ranked pinball players in the world.”

League play at the Short North location is every Thursday with monthly tournaments. Like any league sport, the minutiae of matches and eliminations may be intimidating to the uninitiated, but the play itself shouldn’t be.

“With pinball, gender doesn’t matter. Skill level does,” explained Fish. “The women’s tournament creates an opportunity for new players to learn from more experienced players in a comfortable environment that encourages entry into a male-dominated sport. But everyone is welcome for league nights and all-player tournaments.”

Though only a month in, the partnership already shows signs of cross-pollination—with more pinball players introduced to Melt, and restaurant-goers equally intrigued by the arcade. (It also doesn’t hurt to have Killer Queen, the beloved 10-player platform game, attracting its own cult following back to the hive.)

“When you walk by Melt and see these glowing pinball machines in there—not just one or two, but a whole room of pinball—you want to come in and check it out,” noted Fish. “It’s the greatest waiting room in the Short North.”