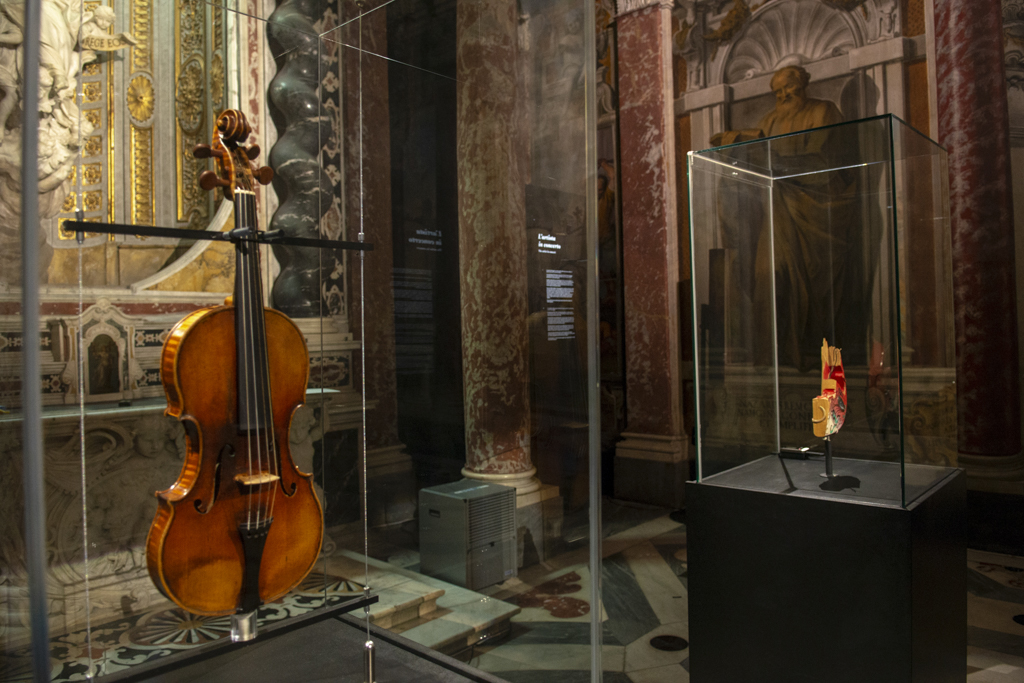 Party with us at ColumBest! Tickets going fast

He was so good that people believed he had sold his soul to the devil in exchange for his virtuosic talents. In fact, for 36 years after his death, his body was denied burial, so convinced was the general public that Niccolo Paganini (1782-1840) was in league with Satan. The violinist was known for composing works of such extraordinary difficulty that only he could play them. His odd appearance, frequent illnesses, and many vices only reinforced Paganini’s diabolical reputation.

Paganini began playing the violin at the age of seven. When he was 15, he sold his expensive Amati violin to pay off a gambling debt. An amateur violinist and businessman gifted Paganini with a neglected Guarneri Del Gesu violin, constructed in 1743. The young musician named the instrument “Il Cannone” (the cannon) for its unparalleled powerful and resonant sound and played it for the rest of his life. Today the violin is housed at the Musei di Strada Nuova, Palazzo Doria-Tursi in Genoa, Italy, the city where its owner was born.

The now-276-year-old violin continues to enthrall audiences. It has been played by Shlomo Mintz, Joshua Bell, jazz violinist Regina Carter, and the yearly winner of each Premio Paganini contest.

This spring, the Devil’s Violin will seduce the modest Midwest right here in Columbus.

For a week in May, Il Cannone will be exhibited at the Columbus Museum of Art. On Wednesday of that week, it will be played in concert with the Columbus Symphony Orchestra under the baton of Rossen Milanov. Selections for the concert include the overture to Rossini’s The Barber of Seville, the Pas de action from Tchaikovsky’s Swan Lake, the meditation from Thaïs by Massenet, and works composed by Paganini himself.

Sameen Dadfar, Program Manager with Greater Columbus Sister Cities International has been working on Il Cannone as a cultural project for over two years, supported by Columbus City Council.

“It all started in 2015. Councilmember [Priscilla] Tyson led a delegation of young professionals to Genoa that year, and among the many activities they did, they got to see the violin be performed.” A discussion began about whether the violin could be traveled to Columbus as part of a sister city relationship with Genoa. The initial answer was a firm no.

“The violin very rarely leaves Genoa. It’s only been [in the US] in New York and San Francisco before. So Columbus is kind of something that we had to work towards,” explained Dadfar. “We’re working very closely with the Columbus Museum of Art and the Columbus Symphony so that we can make sure the violin is taken care of.”

In addition to the exhibition and concert, the film Strad Style will be showcased at the Gateway Film Center. A winner at the 2017 Sundance Film Festival, Strad Style is a documentary of Columbus native Daniel Houck who, through the medium of YouTube videos, becomes a self-taught violin maker on a quest to craft a concert-level replica of Il Cannone. Much of the story takes place in Houck’s run-down Ohio farmhouse. Houck will be available for a talkback after the showing.

Because of its history with a most unusual owner, Il Cannone has acquired an almost mystical presence in the world of music. Today many speculate Paganini had Marfan syndrome, a connective tissue disorder which was responsible for his long, thin fingers, and unusually flexible joints, endowing him with the ability to perform violin techniques thought physically impossible, and therefore, the product of the Devil’s powers. But the violin’s witching power lies in more than its history. Like a fine wine, Il Cannone has improved with time.

“As opposed to modern-day instruments, the biggest difference is that the Il Cannone has had hundreds of years to open up. The wood ages, becomes more complex, softens, etc.,” explained CSO Concertmaster Joanna Frankel, who will play Il Cannone in concert. “The sound that players produce on this instrument affects the structure and timbre, allowing the wood to mold over the years to sound  and time.”

What has taken years to plan across two continents will culminate in just a brief time of rehearsal and performance for Frankel.

“I will have only limited minutes to practice on this instrument, to unlock its mysteries and ‘wake it up’ so to speak, as it is mostly these days on view in a glass case at Genoa’s Palazzo Tursi. I’m excited for the challenge, and also extremely humbled to become one of the few violinists in history to perform on this instrument.”

Il Cannone will be on display at the Columbus Museum of Art from May 10th to May 19th. See columbusmuseum.org for details. The violin will be played in concert on May 15th at the Ohio Theatre. See columbussymphony.com.