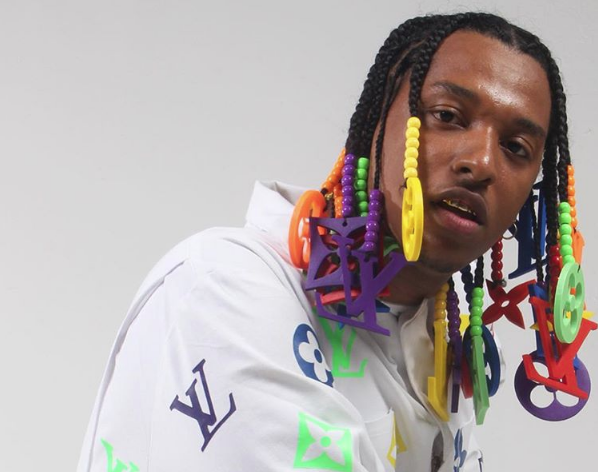 In just a few short weeks, one local artist has gone from hot water at his retail job to the pages of Bazaar, Cosmopolitan Magazine, and Vogue.

Magnus Juliano is a Columbus based rapper and stylist who gained national exposure this month by featuring a modeled  Louis Vuitton jumpsuit and matching beads on his social media. People fell in love with his unique style and he blew up instantly. He gained over 10k followers and  was featured in publications like BuzzFeed, PaperMag, and BET among others.

Juliano worked with Eat Crow Studios and Freshbrand Clothing Co. to create his signature 3D printed, Louis Vuitton branded look. In an interview with PaperMag, he explains how he was inspired to create his braided look. In referring to his childhood, he says,

“…black girls would get their hair braided and their moms would attach beads and other hair accessories, and then when we got a little older, the hairstyle that I wear pretty often with the single braids and the beads — that was pretty big when I was a teenager, wearing beads and braids. It’s just tied into the fabric, the very fabric, of my culture, my history, my ancestors. It really makes me feel proud of where I come from when I wear beads and braids.”

This comes shortly after Magnus found himself in a position where he had to defend his blackness. In late November, he was working at H&M and wore a shirt that read “Stop Racism Against Black People”. He was quickly called off the floor and was told that the shirt was inappropriate because it was too controversial.

He was then told to either change or leave. He took to social media to report what happened, as he said that no one at work would vouch for him. As a result, he started selling those same shirts on his website as a form on resistance and continued to wear his shirt to work.

His most recent exposure gave him the push he needed to finally leave the company. He recently posted to Instagram saying “I finally quit my racist, discriminatory, and abusive job.” He acknowledged that times may be rough for awhile but he’s willing to continue working on his art in hopes that it will provide a steady income. As for now, he’s expressed immense gratitude for all the support he’s received and is excited to be able to focus on what he loves most.