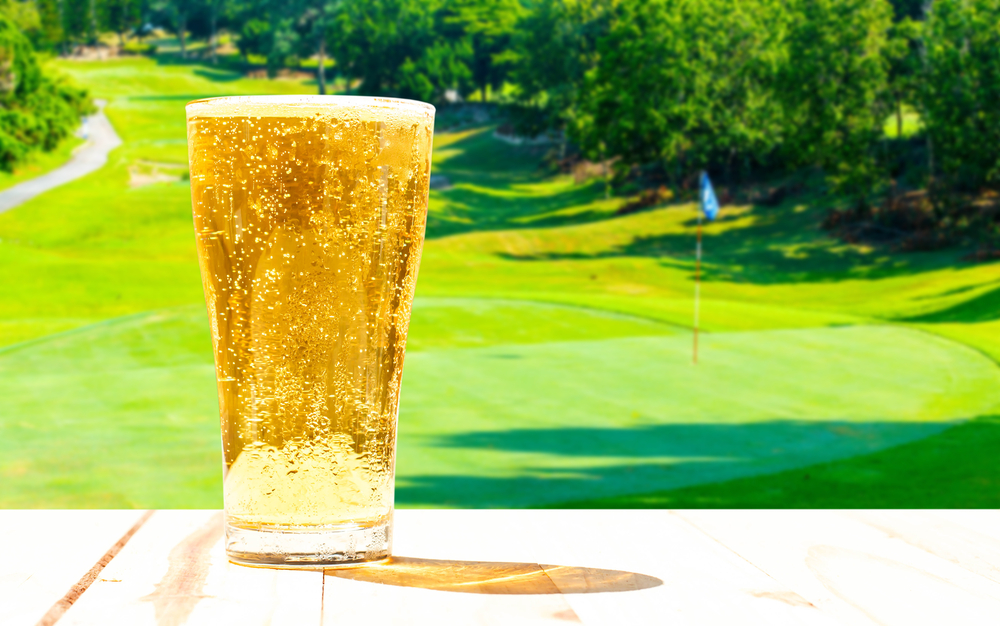 Oh the sounds of a golf tournament. From your (hopefully) cozy spot, you’re bound to hear anything from balls being smacked nearly 400 yards to athletes cursing the club they just swung. The fans are a part of a viewing spectacle unlike any other sporting event where being obnoxious is frowned upon, and courtesy and class is expected. There’s no student sections doing chants, anyone with an air horn is just asking for trouble, and Brutus won’t be getting tackled by the Ohio University Bobcat at halftime (remember that?).

Perhaps it’s because of the excellent location in proximity to the Muirfield course—the 6th hole is nearly visible from the back parking lot—or maybe it’s just the large space staffed with more than 100 bartenders and bar hands that flock from near and far to accommodate the high volume. It’s possible that it’s a combination of everything: ample parking, shuttle transportation to and from the course, the enormous patio, Uber and taxi pick-up lines, and even live entertainment slotted for all the days of the tournament. No matter what the recipe for success is here at The Bogey, Jeff Parenteau and Greg Bertison have found a way to tap into the paradox that is golf viewing and golf viewing parties.

Since taking over the location in 2011, The Bogey has played host to Muirfield-goers for seven years. Needless to say, there’s been a learning curve over that span of time. Parenteau recalled the first year of the tournament for the restaurant and bar when the focus was to just get the operation up and running in time for the tournament. At one point there had been so many cash sales that the drawers were too full. Security escorted Parenteau to the exit with loads of cash in his cargo shorts. The chaos that ensued that weekend began a tradition for many golf fans and Parenteau and Bertison say they have regulars that come in from all across the globe to this very day. Whether you were the drunk fool last year (everyone takes their turn), or just a familiar face who’s been showing up to The Bogey for years now, Parenteau and Bertison both agreed they are never too busy to stop and have a beer with a friend.

All things booze aside, chaos is something the two go to great lengths to avoid. Throughout the weekend, there are 30 to 40 security guards rotating in and out of the bar—the buffer zone between having fun and making an ass of yourself. With that being said, there are the times where things slip through the cracks, so to speak. Parenteau said one year he and the security team had to spend some time helping a woman out of a cooler. (Long story short, she sat down and the cooler sucked her in.)

The mornings are always an adventure for the crew as credit cards, articles of clothing, shoes, and cell phones pile in the lost-and-found box. Another year took dirty to a new level as a couple was found expressing their love for each other… in a port-a-john, a scene Bertison says he prefers to forget. And even the infamous golf party boy, John Daly, has set up shop at The Bogey. (You know you’re on the right path when you get the John Daly stamp of approval.

The Bogey has also turned into a hub for local celebrities and athletes for the tournament as well. In addition to Urban and Shelley Meyer occasionally making an appearance, Bertison said he has seen many patrons kicking back drinks with members of the Columbus Blue Jackets. And if you’ve ever dreamed of meeting a professional golfer, keep an eye out for the cuts each round and it shouldn’t be hard to spot them at the bar—they are the guys with the hardest tan lines on their face, arms, and hands.

If you are just looking to celebrate the tournament weekend, there are VIP packages available, which includes a bar exclusive to just VIP patrons as well as your own bathroom—something you won’t know how much you appreciate until you see the lines to the bathrooms all weekend. There’s also the chance for you to get closer to the action with the house they have set up on the course, which is all inclusive of drinks and food. Of these packages, the Hole In One offers a PGA ticket to the tournament, while the Eagle Package offers the views of the 12th hole via the balcony, just without a ticket for entry. And if you’re really looking to celebrate every second of the madness, The Bogey will be offering happy hour specials from open (an earlier opening time at 7 a.m.) into the afternoon.

Like all things drinking, it’s a marathon, not a race. There’s a few tactics for tackling the weekend, but Bertison and Parenteau agree starting your day with a few beers at The Bogey will help you pinch a few pennies compared to the $9 tall boys on the course. This also buys you some time in between your next round of drinks as you can start early and ride the wave with the more expensive beer once you’re in. Rain delays also seem to be a consistent theme for the weekend and that’s when The Bogey can really get busy—if the delay is an hour or longer, the course cuts all alcohol sales until the action kicks back up. If you start to notice rain clouds, it might not be a bad idea to dip out early to beat the rush. And if you’re a little hungover to start your Saturday, that’s nothing a Bloody Mary can’t fix (prolong).

The Bogey is located on 6013 Glick Rd. For more information on hours and VIP packages, visit bogeyinn.com.