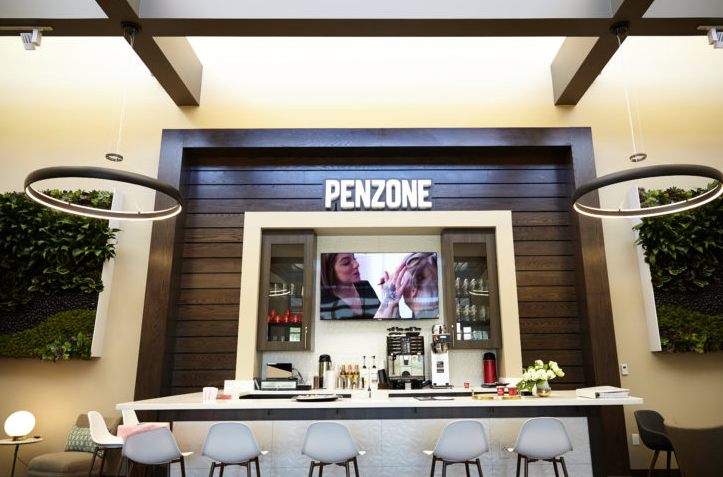 You won’t have to travel far—some of you may not to travel at all!—to visit North America’s best salon.

Penzone Salon + Spa in Dublin was named the Salon of the Year at the North American Hairstyling Awards held in California this past weekend!

Last year, the company marked its 50th anniversary with the reopening of its 14,000-square-foot Dublin salon and spa.

The new Penzone is like stepping into a room that has collected everything millennial women are into. The salon and spa has plants growing on the walls, succulents decorating tables and health juices and energy balls for thirsty or hungry patrons. Local art hangs on the walls, they sell local beauty products, and sandwiches sit in the refrigerator. Crimson Cup coffee, with a special Penzone drink, is served in the “Social Room.” Basically, all it’s missing are cute dogs.

Of course, there are the typical salon and spa accents: around the corner are rows of almost every nail polish hue imaginable. A color station shows clients how dyes are mixed, the mirrors hint at taking an unfiltered selfie and shelves are filled with styling products. But these aspects don’t overshadow how much of a foil this location is to the “O.G.” Charles Penzone Grand Salon just across the parking lot.

The company, led by President and CEO Debbie Penzone, is trying to defy what many middle-aged women work hard to fend off: the wrinkles, dark spots and lost glamour of aging. On the eve of its 50th birthday, the salon and spa company that has always called Columbus home is completely revamping its identity, creating a Penzone that is younger, hipper and more closely aligned with the city’s style.

“It’s electric, exciting, all-inclusive,” Penzone said, adding she wants Penzone’s identity to include mindfulness and gratitude. “We are beyond beauty…How do you still continue to be your best self, and that’s really from the inside out, and the outside in.”

I haven’t been to a salon in over a decade, opting for a haircut twice a year at Great Clips and relying on drugstores for my clearly high-maintenance beauty needs. “Contouring” and “blowout” are not words that exist in my beauty toolbox. But, I have to say, sitting in the new Penzone location really showcased how the other half lives, and I could see how Penzone’s newest attitude could attract folks that would have never considered heading there in the past.

Penzone’s transformation has been happening gradually over the past few years. The opening of its new location was three years in the making, dating back to when Debbie first started visiting other salons and spas around the country looking for inspiration. When development on the new location was stalled due to a zoning conflict with the City of Dublin, she and her husband went ahead with two ideas that in the end paved the way for reinventing her company. First, Charles Penzone opened a barber shop, the Royal Rhino Club, in early 2017. With its 400-pound rhino-head statue mounted on a wall and signature cocktails crafted by Cameron Mitchell, the Royal Rhino attracts millennial men and women to its trendy Fourth Street location.

Later last year Penzone’s first yoga studio, LIT Life & Yoga, opened next door. The space hosts LIT Labs with themes such as “Harness your fear” and “This is me,” where all women rock their sports bras. Representing the company’s revitalized philosophy of holistic beauty and wellness, Penzone said she hopes the yoga studio and the salon and spa will help empower women and encourage them to love themselves inside and out, regardless of size, age, color or other characteristic.

“It’s fresh, it’s exciting. It’s all about community it’s all about being together and sharing experiences and moments, and empowering each other with those moments,” Penzone said.

All together LIT Life & Yoga and the Royal Rhino Club added a dash of urban youth to the brand that became infused in the latest concept: the new location has a patio where Penzone envisions host yoga classes for mindfulness and meditation and a women’s empowerment group.

Penzone’s locations are a not-so-coincidental reflection of its clientele, and its hopes for expanding into the future. The original salon was founded by Charles Penzone, Debbie’s husband, in 1969. Since then, it’s grown from three artists serving a handful of guests to six salons serving more than 25,000 guests monthly. In its newest iteration, Penzone is evolving out of the suburbs and welcoming not just the suburban mom but also a younger, more diverse generation into its buildings. “We are on fire like Columbus is. I love everything I’m seeing in Columbus right now, that’s why we were so excited to go to Italian Village…That whole area is getting gentrified. I love it,” Penzone said.

The rebrand spans from the font it uses for its new name and its advertisements featuring “ideal clients,” AKA your average person, to its modern outlook on wellness and beauty. The concept will be rolled out at its various locations throughout the next few years.

“It’s not just your outer shell of beauty. You’ve got to be your best you and how do you find your unique beauty and live it,” Penzone said.

Accompanying these changes is an increased intentionality in design and detail. At the new location, the Beauty Zone is an area right in front of the main entrance that features a bar offering blowouts, makeup, skincare services and Beauty Labs to teach quests about trends and techniques. It’s a social area where everything is on display that doubles as a learning lab.

In the lather rooms, squishy neck pads are a fan favorite, and aromatherapy turns a guest’s shampoo into a multisensory experience, a theme throughout Penzone. Stylists have soft-close cabinets at their stations, and each chair is positioned just far enough apart so guests can only see themselves in their mirror. Floor to ceiling windows bring in natural sunlight and enhance a connection to nature that Penzone said the location was striving to strengthen.

The salon and spa is also expanding the services it offers, now with threading, hot rocks, and ayurveda. While having a dual mani-pedi, guests can choose to listen to a station through headphones, even with the option of working in some ASMR with binaural beats. Penzone even makes its stylists work under new names so that each person can easily be identified by clients. Two, Harley and Athena, were working at Penzone the day before it opened to the public in early May, and they both said they were excited about the new concept.

These changes don’t necessarily mean the cost of Penzone is going down; a trip to the salon or spa could easily run a guest over $100. But with all the options for personalization it now offers, Penzone is hoping guests will demonstrate why the company has been able to stick around for half a century already and is ready for 50 more.

For more about the rich history of PENZONE Salons + Spas and for locations near you, visit penzonesalons.com.