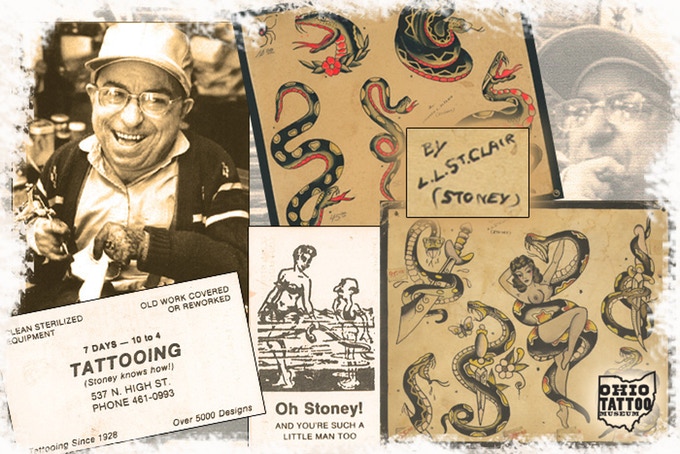 In honor of the return of Hell City Tattoo Fest this weekend (April 26-28 at the Hyatt Regency Columbus) we’re throwing it back to a classic 614now post about Columbus’ connection to a tattoo legend.

In the ’70s, one of the most famous tattoo artists in the country was a former sword swallower named “Stoney.” And he lived in Columbus. Yes, that’s right.

Disabled by rheumatoid arthritis since the age of 4, Leonard “Stoney” St. Clair’s diminutive body was confined to a wheelchair. In 1927, a traveling carney heard his story and shoved a stone poker down Stoney’s throat, granting him the talent that a 15-year-old handicapped boy needed in order to run away with the circus.

After a year of circus adventures, the troupe made a stop in Virginia, where Stoney saw a sailor getting a tattoo of an eagle on his back and thought that he could do better. So he befriended the artist who then taught him how to tattoo. When the circus left town, Stoney put his new skills to use in the form of an illegitimate stand behind an elephant tent.

After the circus withered, Stoney spent the next 40 years of his life traveling across the United States. He became a gregarious underground icon of American tattooing. He even had a short documentary made about his life, which bore the same name as his tattoo shop in Columbus, Stoney Knows How. He set up shops in Tampa, New Orleans, LA, and then finally Columbus, where he died in 1980. After Stoney’s death, there were only two tattoo shops in Columbus left—now there are 172.

That’s Richard Thomas’s favorite quote, though like the history it alludes to, the source has been forgotten. The man known as “Rich T,” has dedicated much of the last two decades to preserving and promoting the legacy of Stoney and the rest of Ohio tattoo culture. As curator of the Ohio Tattoo Museum, he’s determined to make sure that this history isn’t lost.

“I thought tattoos were cool since I was a little kid, and I am in [my] fifties,” he said. “Like right out of the gate. My dad was in the Navy in WWII, on an oil tanker in the Atlantic, and he had a couple tattoos, which he found to be embarrassing later. I thought they were cool.”

Since the turn of the century, the culture of tattooing has changed significantly, he said. “There are more art school guys getting into tattooing—you used to have to be the kind of guy to get along in a rough and tumble world, and a lot of that is kind of gone.”

The type of tattooing that Stoney St. Clair and other Ohio greats of his time—like Marty Holkcomb and Al Schiefley—did was essentially folk art, the type of ink you might expect on an old-school biker or a cartoon pirate.

“These guys were shakers and movers,” Rich T said. “A lot of shops would have the same type of military designs, done over and over again, so every image would be the same, but in a different style. The different takes and interpretations of the same design is what makes it folk art.”

Rich T is the type of dude who is brimming with tattoo knowledge. His museum, which has existed in some iteration since 1999, is in the process of fundraising a colossal overhaul. As of a few months ago, Rich and his wife decided to launch a Kickstarter campaign to help facilitate the move into a space double the museum’s original size, and to have it available to the public full-time (it was previously by appointment only).

[Editor’s note: since the original publication of this piece in 2015, the Ohio Tattoo museum reached its Kickstarter goal. It is open to the public at 1928 Jackson Pike in Bidwell, Ohio.]

“We have always dreamed of having a real museum with real hours that is staffed, and we are in the process of all of that dream coming true,” he said.

The museum has plans to put on three shows a year—the first serving as a loving dedication to the colorful St. Clair. “Stoney was the underbelly of the underbelly. He deserves to be remembered,” Rich said.

In the past, tattooing was a marginalized and ignored practice, and it is currently undergoing a cultural awakening. We are living in the tattooing Renaissance—the golden age of ink on flesh. This is why it is so imperative to remember the vibrant cast of Ohio legends that contributed significantly to the folklore of tattooing; like Schiefley, who sold and supplied all over the world in the ’50s, including to the infamous Bristol Tattoo Club in England; or ReRun, who owned a shop in the late-’70s in Springfield that was a school bus buried into the side of hill. This kind of stuff almost doesn’t happen anymore—the kind of wacky, irreverent social deviance that was being snubbed even while it was happening—and Rich T is the crypt keeper of the Ohio tattoo saga.

Ohio’s impression on the modern world goes far beyond mere aviation—a state that has innovated and revolutionized the folk canvass of tattoo culture stitch-by-stitch, needle by needle, stick by poke.