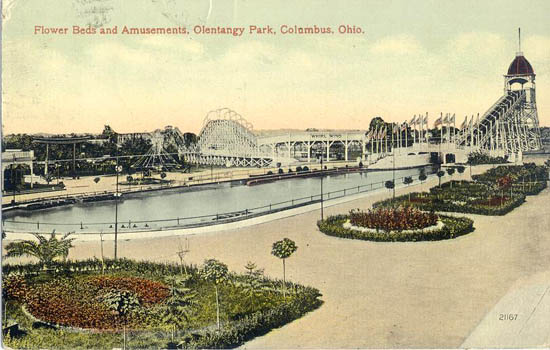 Bizarre situation involving I-270 accident and a cold swim

With its brick facades and bright blue awnings facing High street, The Olentangy Village apartments are a Clintonville landmark in their own right. Though you’d never know it from the orderly rows of dwellings that stand there today, the stretch of land between High Street and Ackerman was once home to one of central Ohio’s most thrilling destinations.

From 1899 to 1938, Olentangy Park—once one of the largest amusement parks in the nation—occupied the space that is today Olentangy Village.

Opened by the Dusenbury Brothers, Olentangy Park was home to “The Figure Eight,” a full-scale wooden roller coaster. Other park attractions included a tunnel of love, a zoo featuring wildlife including monkeys, bears, and elephants, and a Japanese Gardens exhibit imported straight from the 1904 World’s Fair in St. Louis.

Expansion of the park continued in the 1910’s, with the addition of several more rides such as the “Loop the Loop,” an early example of a looping roller coaster. A ferris wheel was added, and in 1914, a carousel—the very same that is enjoyed by riders today at the Columbus Zoo and Aquarium.

By 1938, effects of the Great Depression had greatly deceased Amusement Park attendance, and Olentangy Park was forced to close. Many of the rides were liquidated or dismantled altogether, with some relocated to the Wyandot Lake Amusement Park. The land was eventually leveled to prepare the way for the construction of Olentangy Village Apartments.

Today, the only building from the Olentangy Park that remains intact is the park’s office and zoo keeper’s quarters on North Street, which has been repurposed into six apartments.

The next time you’re grabbing a gyro at Aladdins or getting your hair did at Aveda in Clintonville, picture generations of people screaming their heads off several stories above you on wooden roller coaster!