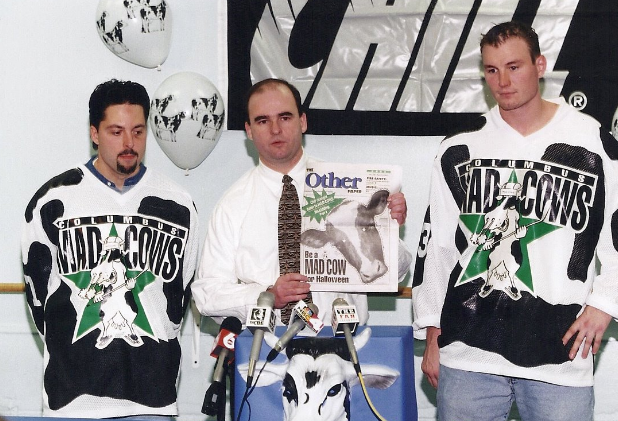 Way back in 1997, the NHL ran a “name the team” contest for Columbus’ newly minted hockey franchise. 14,000 submissions were narrowed down to 10 potential names, and the rest is history.

While Columbus Blue Jackets fans have proudly stood behind the team since the year 2000, a look back in time shows the naming process could have yielded a much less desirable moniker.

Among the 14,000 would-be names that didn’t make the cut, one standout, suggested in jest by staff at The Other paper (RIP) managed to gain some traction.

Embracing the cowtown mantle that many in the city are still eager to cast off, the “Columbus Mad Cows” became something of an early viral joke in the pre-Jackets days.

The beloved Columbus minor league team The Chill (again, RIP) went as far as to get in on the action. According to columbuschill.net, a press conference was held by The Chill’s brass (with some help from Other Paper publisher Max Brown) to announce a name change for the team just one day before the season opener.

When the team took to the ice sporting new “Mad Cow” uniforms, the joke had come full circle. With The Chill’s season opener happening to fall on Halloween that year, the alternate look was chalked up as the ultimate group costume, and the Mad Cow look was never seen again.

While the Mad Cows were a funny in-joke for central Ohians to rally around, I think we can all agree that not having a name that ties our city to diseased livestock with each mention is probably for the best. Go Jackets!