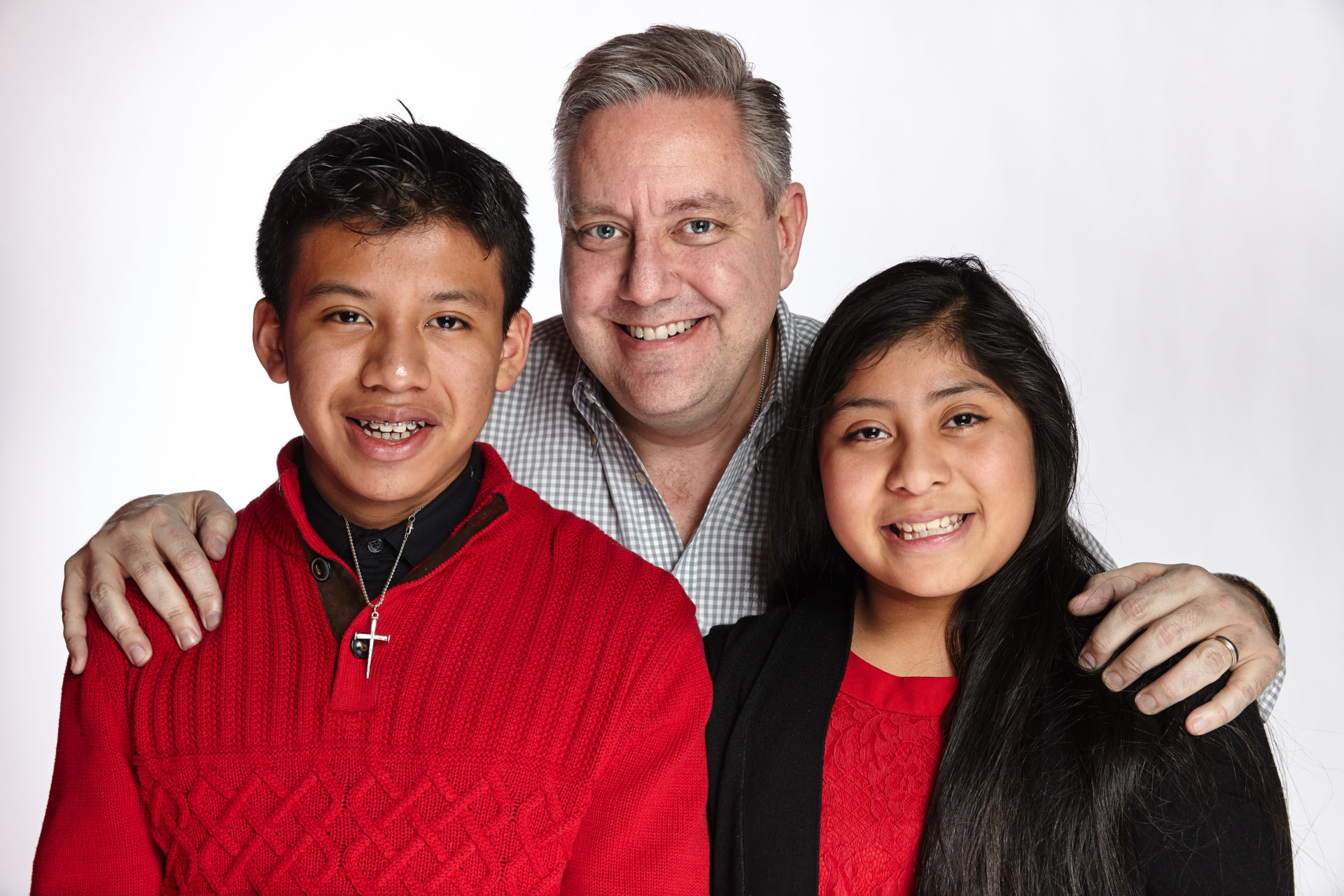 Jason Bradley-Krauss has a love story to share. For twenty-three years he and WBNS Chief Meterologist Chris Bradley shared their lives as partners, then as adoptive parents, then as a married couple. They lived in near-perfect synchronicity until Chris became ill with leukemia, passing away earlier last month.

But from this partnership, Bradley-Krauss still carries two projects of love. The first is Spencer and Maria Bradley-Krauss, both adopted from Guatemala, who are the fulfillment of their dads’ lifelong desires to be parents. The second is Design with Heart Studio. Bradley-Krauss, a corporate graphic designer who announced his career ambitions in the third grade, was inspired to begin a paper goods company when he was unable to find a suitable announcement for his engagement to Chris. Design with Heart has now expanded to retailers across the country, as well as the UK, Australia, and Canada, announcing to the world that Love is indeed Love.

On falling for Chris Bradley: In 1995 I did the design work for Steppin’ Out AIDS Walk Detroit. And it was a run, rollerblade, walk event. And I chose to rollerblade. I knew who Chris was; I’d seen him on the news and thought he was incredibly handsome, but I turned around in the registration line in my rollerblades and he was standing right behind me. It caught me off guard and I literally slipped and fell. But I fought falling, so it was arms and legs all about me and I landed right on my bum. And he started laughing, and I thought, “That turkey.” But I still kind of thought, “Well, I’d still like to meet him.” And about two weeks later a friend of ours introduced us and we hit it off immediately.

On life together: Chris was very supportive of my career and my goals as I was his, and I really think we were on the same page with just about every life issue. That made parenting together easier. We talked a lot, you know. To know Chris is to know that he was a very chatty person. I remember when we first met, he called me at my office and we talked, and then about thirty minutes later he called me again, and was telling me, “I’m defrosting pork chops for dinner tonight and I’m going to go the the gym.” And he called me like two hours later, and I thought, “What’s happening?” But we remained that way. We talked throughout the day on a constant basis over the past twenty-three years.

On adoption and raising a family in Columbus: When we moved here in 1998, I was uncertain whether we would stay here in Columbus very long. And Chris was also in a business that moves people around quite a bit. But I used the opportunity to launch my design firm and establish creative roots here. Within a very short period of time Columbus felt like home. When Chris and I decided to adopt, we did not know another male couple who had gone through this process…. So in terms of arriving at parenthood, we really has to carve out and learn a lot about the adoption process, the international adoption process, and then about raising kids. But we have found Columbus to be a very welcoming community and we feel really blessed to have raised our children here. Moving forward with adoption was God’s greatest gift to us. Those children are our life’s greatest blessing.

On living with integrity: When I look at Chris’ life, I see it in three segments. I see the way he lived his life, the way he fought his disease, and the way he died. And he was very consistent in each of those three categories. He wanted to live an authentic life. He led a spiritual life. He wanted to be a family man. When he was diagnosed with his illness, he wanted to make certain that something good would come out of that illness…. I remember distinctly a conversation that we had where he said, “The world seems so dark right now, but I want to shed light and make certain that something good comes out of this.” And I really think at that moment I could see cracks in the darkness and I could feel the light entering into our cancer journey.

In dying, he showed such great faith. He showed such a sense of peace that he belonged to God and that God had a bigger picture for him. He knew where he was going. He was proud of what he had done. We were proud of the choices we had made as individuals and as a couple…. We’ve made choices that not everyone has had the courage to make. But we didn’t make those choices to be cutting-edge. We made those choices because those were the choices that resonated with us.

On grief: What I’m walking through now is what they call anticipatory grief. We knew in September that we had exhausted the treatments that were available. For me, doing everything I could to honor Chris’ wishes which were to come home and […] to be with his family, to spend as much time with his family as possible, and to die peacefully at home. And I was able to help facilitate that, and there’s a certain amount of peace that comes from that.

On Design with Heart: I set out to just design a few cards I thought might be appropriate for male couples or female couples. And as I did that work, I thought, “I love this.” It taps into my love of typography, my love of graphic design, my love of illustration. But also, it allows me to put forth really positive messaging. And so I intended for the line to be simply based around marriage equality and LGBTQ lives. But then the message that came back to me is that love permeates all that’s good and hopeful. Love is present in all of life’s greatest celebratory moments: a new baby, new home, birthday, even thank you and thinking of you. And so I just had a little bit of time that opened up with my client work and I decided I would just give myself a week and see what I came up with. And at the end of the week I had forty-five designs done, and I had forty-five more that I wanted to get done. I just thought, “There’s something here.” 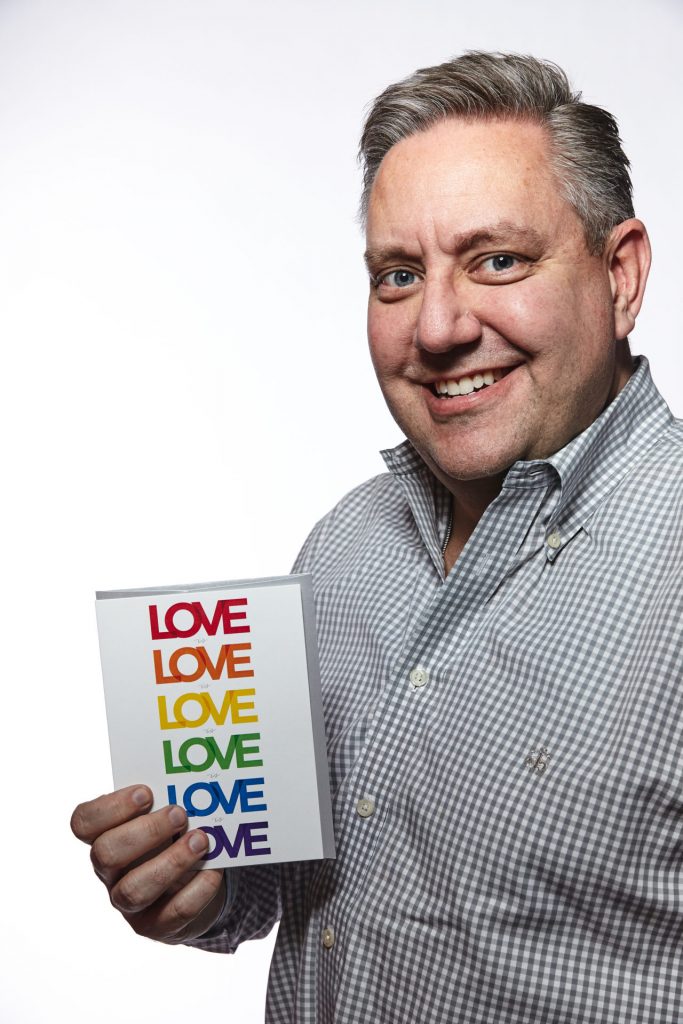 I launched Design with Heart in May 2015 at the National Stationery Show in New York and it was a mad scramble to put together an entire product line, website, catalog, inventory, shipping procedures, but it was a passion project, and I derive great joy from it.… Immediately we took orders from museum stores and high-end boutiques around the country…. I think for me as a creative person the greatest thrill has been having the line picked up by the high-end museum stores because what else as a creative person was I ever going to design that would end up in a museum, right?

On the written word and love: It’s fun to know that the work that we’re doing is actually a touchpoint between people. We try to have our greeting cards start a conversation, as opposed to trying to be the conversation, so it is a connection point between two people…. It’s been really amazing also in Chris’ illness to see just how many people still take the time to understand that there is power in the written word. There is power in the connection of reaching out to someone with a written note. I hope we don’t lose that as a people. No one is ever going to take an email and print it out and save it, but I can tell you there are handwritten notes that were sent to Chris and to our family during this time that I will forever treasure.