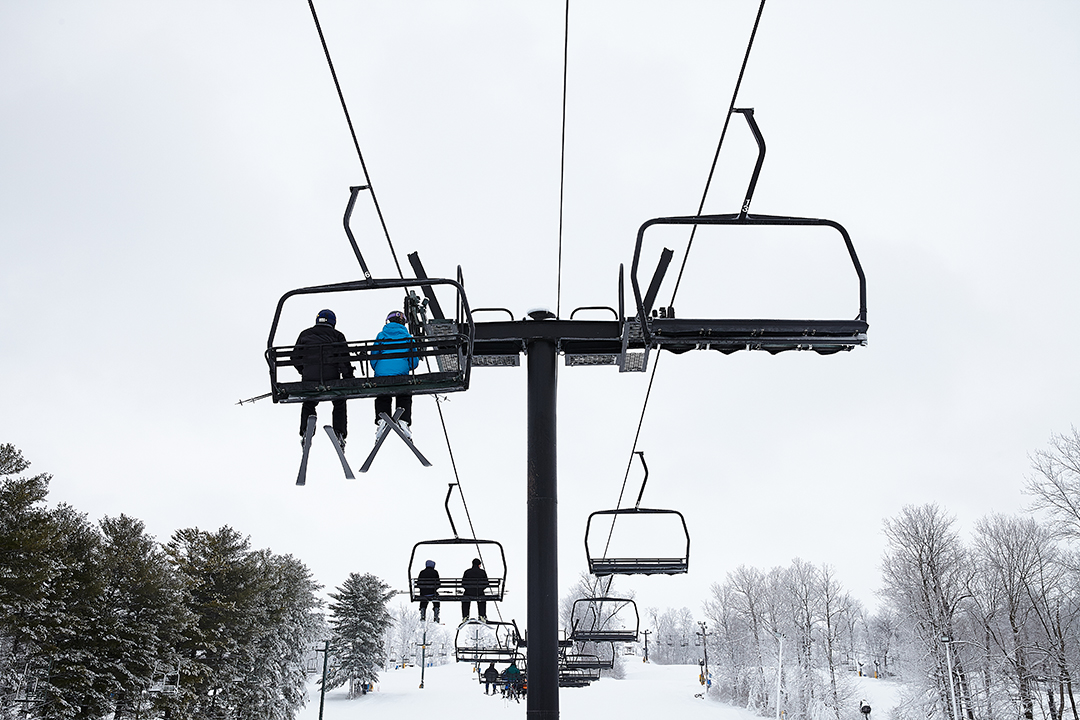 It didn’t look like it was going to happen, but it happened.

After a spring-like beginning to January, the temperature finally dropped.

The heavens opened, and snow poured down. Stuff got canceled. And the
people at Mad River Mountain Ski Resort had a party.

“I went out yesterday,” said Sam Collins, one of the employees at Mad River, which is Ohio’s largest winter resort. “Everyone’s really stoked.” Except me. I’m supposed to take a downhill skiing lesson, and I’m slightly nervous.

I’ve never downhill skied before, unless you count a Girl Scout trip which in which our troop barely made it down the bunny hill in sludgy snow that nobody else wanted to touch. (I do not count this experience.) So as I’m introduced to Pat Tynan, my ski instructor, and head out to the practice area occupied by a group of preschoolers, I’m looking forward to a day of falling face-first into the snow and shots of me waving good-naturedly as I slide backwards down the hill.

But it turns out that I am some kind of a freak natural downhill skier. I blow past those kids on the practice hill, slicing my way through every set of cones on my first try, and end up as one of the handful of students my ski instructor has had in 20 years of teaching snow sports to go from practice hill to chairlift in less than two hours. “Natural athletic ability,” he beams. I tell him I don’t play any sports and almost failed gym. “Excellent sense of balance,” he continues. (I pray he never sees me dance.)

So I don’t know what to tell you snow sucks who can’t crush it on their first run. But I will try.

• Don’t just hit the slopes. The first piece of signage I saw in the lodge read, “Friends don’t teach friends.” I agree. Let the pros handle this. Tynan first checked my equipment, including the fit of my ski boots, which turned out to be not quite tight enough, and covered with snow boogers (excess snow). Then he took me to level-ish ground to learn how to turn and stop (which I learned, you need to anticipate well ahead of time). Holding your arms out in front of you, Tynan says, is the secret to skiing. You will also feel much better about wiping out when a professional is nearby. Speaking of which…

• Don’t be afraid to fall. “If you’re not falling, you’re not trying,” Tynan says. I’m unsure how this applies to me, since I fell only once when I got confused about which way to turn. But falling does happen, and an instructor will show you how to get yourself back up, even if you need to remove a ski to do it.

• Try to visit during a less popular time/day. Obviously, you get more time on the slopes, but I credit some of my skiing success to the lack of other skiers (targets) that I could hit or be hit by. Skiing on a nearly empty run also provides the slightly scary, wind-rushing-past-you thrill that downhill skiing is supposed to be about.

• Just do the helmet. I really didn’t have a choice about this. I was instantly measured for a brain bucket as soon as I hit the equipment rental room. I didn’t even know there was a raging helmet debate. I found it not uncomfortable, and warmer than a hat. It didn’t make me feel overconfident or more reckless. (I’m a damn beginner.) Yes, if you hit your head hard enough, a helmet will not prevent you from sustaining a head injury. But the studies show there’s nothing to lose by wearing one, and the severity of a possible injury can definitely be lessened. Now that I’m used to it, I don’t see the point of
going back.

Mad River Mountain has 20 trails, 12 lifts, and four terrain parks, including its signature Capital Park. If you make the trip and find that skiing is not your thing, the Avalanche Tubing Park, which requires no special abilities to use, might be—although you will need a separate lift ticket. Alternatively, you could hang out at the base lodge, where the resort often hosts live music at The Loft Bar, including The Reaganomics and Brothers Crush Circus. The $5 grilled cheese sandwich is a nice bargain, and leaves some cash available for a whipped cream-topped boozy hot chocolate.

So there you have it—advice from a beginner turned ripper in an afternoon. Keep an eye on the terrain, not your feet. Use the whole mountain. Anticipate everything. And above all, stay hydrated. Always make sure to stay hydrated.