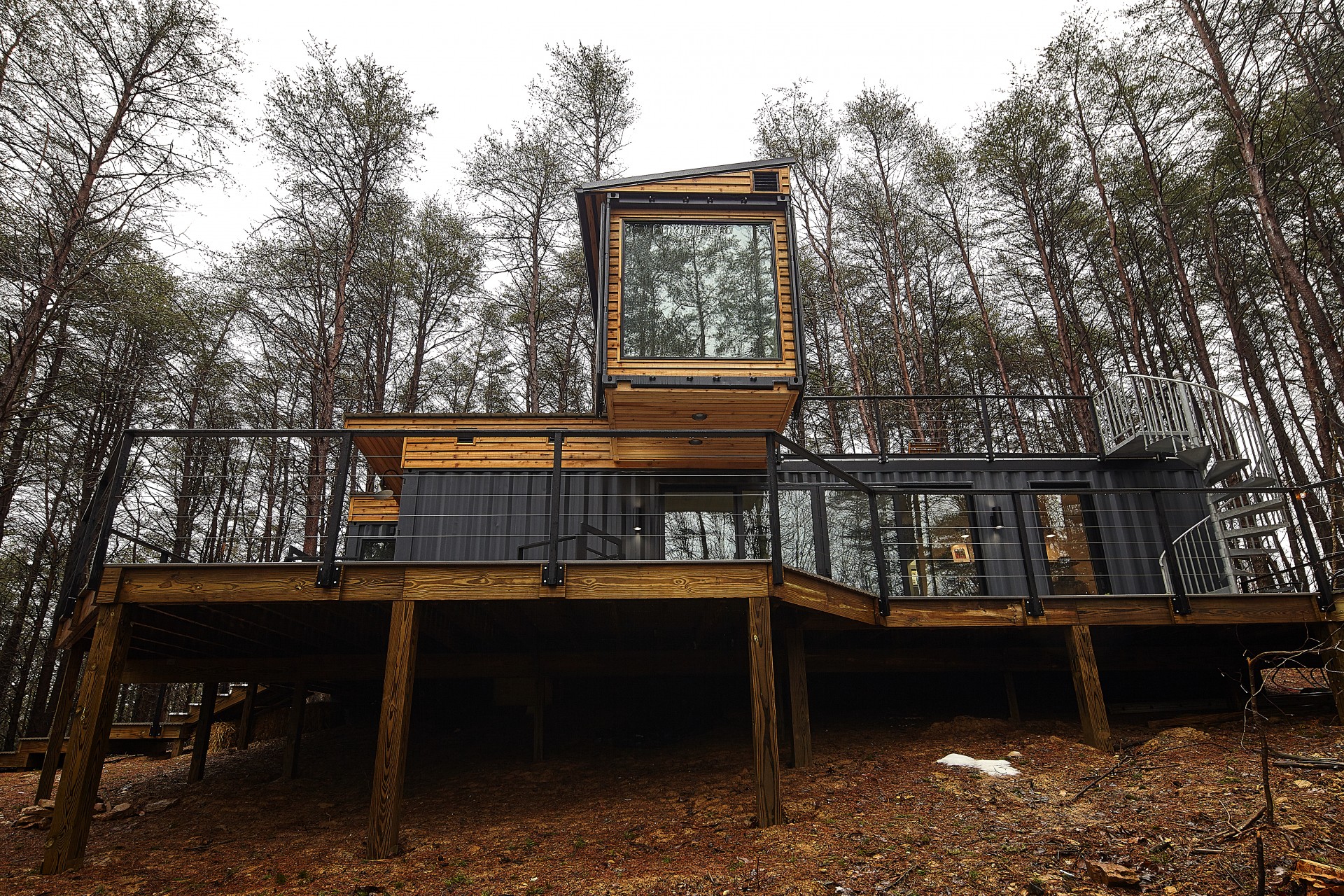 Winning at the game of life: 4 pieces of advice from a local relationship coach

Holiday weekends in Hocking Hills offer ample opportunities for outdoor adventure. But Seth and Emily Britt’s first overnight stay at the site of their modern take on a cabin in the woods was more than either anticipated.

The family of four (now five) had recently closed on the lot after an exhaustive search for just the right spot to build what would become known as The Box Hop, a home away from home built from three enormous steel cargo shipping containers assembled in gravity-defying fashion. The sleek aesthetic and amenities break from the more traditional rustic retreats just a short drive from Columbus.

Exceeding expectations was always the plan. Getting rescued from rising flood waters in the middle of the night was not.

“Emily woke me up at around 2 a.m. freaking out. She’s normally the calm one, but she was terrified,” Seth recalled. “The water was creeping up the side of the RV. The fire department had to evacuate us because we couldn’t get back to the other side of the creek.”

When the waters receded, the Britt family found one of the shipping containers had actually floated downstream more than 300 feet into their neighbor’s yard. Rainfall and runoff would continue to plague the construction process. But now after a decade of dreaming, years of planning, and months of delays, their unlikely abode was finally ready to share with friends and strangers alike.

“It all started when I was working at FedEx as a third-shift package handler while going to Ohio State,” he revealed. “I grew up in a trailer in Jackson County and realized the shipping container I was loading was larger than the home I grew up in.”

Seth was already pretty handy, having rehabbed a duplex in Olde Towne East. The couple’s first home was a HUD house in West Jefferson that had been vacant so long it was overrun with raccoons. Neither was easily put off by hard work, or a little wildlife. A growing family drew them back to the city, but never dampened their dream.

“We sold that house when the market was up and moved to Westgate. After putting in bids that fell through on several other properties to buy and fix up, we decided maybe it was finally the right time to consider the shipping container house,” he explained. “We spent a year trying to find the right lot with the right size, location, and access. Luckily, Emily knew exactly what she wanted, which helped narrow our options.”

Emily had earned her real estate license along the way, and had a natural knack for design. Her father works in environmental construction, so those insights informed and inspired her striking silhouette for The Box Hop. But the functionality grew entirely out of the family’s personal connection to the perennial destination for hiking, rock climbing, and scenic serenity.

“We’d been going to Hocking Hills for years, so we had this mental list of things we appreciated where we’d stayed, and things that were missing,” she recalled. “We wanted to create a different spin, the kind of place that would be more than just somewhere to stay, that felt like a place we would want to live.”

Much of the meteoric appeal of AirBnB is its authenticity over another ho-hum hotel room. But trying to make a place feel more like a home can easily end up a hodgepodge. The Britts sought the right balance, inside and out, by creating a simple and sophisticated stay unlike anything else in the Midwest.

The offset configuration of the two lower containers opened up a surprisingly spacious entertaining and dining area with a private bedroom and well-appointed kitchen at either end. The central spiral staircase leads to the second story patio and rotated third container with wall-sized windows at either end that blur the barrier between the bedrooms and the forest that surrounds them.

“We worried they would look boring side by side, so I played around with the design. When we considered options for the second story, I knew the containers were designed to be stacked and I could turn the top container and still support the weight. Then I just tweaked it here and there to try to line up the plumbing,” she said modestly. “The bedrooms would be a little smaller due to the width of the containers, but I knew we could work with that by bringing the outdoors in. The windows open the bedrooms to all of the seasons we have in Ohio.”

The result is stunning and unmistakable. The steel and glass that should contrast with the terrain mysteriously complement it. And at the right time of day, the reflection of the pines in those oversized windows makes what remains of the structure almost disappear into the tree line like postmodern camouflage. If you somehow combined Henry David Thoreau’s reverence for the natural world with Frank Lloyd Wright’s esoteric style, it would surely look a lot like The Box Hop. It’s Walden Pond meets Fallingwater.

“We’ve had a lot of folks ask us if we’d ever sell the place. But for us, it’s personal,” Seth confessed. “We spent countless hours designing every aspect, and it’s still a vacation home for our family and to come with our friends.”

Anticipated additions to The Box Hop include suspended seating and an outdoor shower to complete the existing patio area and hot tub, as well as a large-scale mural on the exterior that references and reinforces the emerging brand—all elements that were deferred due to construction delays. The couple coyly hinted that another container getaway isn’t out of the question. With more than 18 acres available, the additional location would offer the same privacy as the original, but with its own unique charm and character.

“For now, we don’t want to disrupt our guests with chainsaws clearing a landing spot for another house,” Emily laughed. “But we also didn’t expect to book up so quickly.”

For details on The Box Hop, visit theboxhop.com