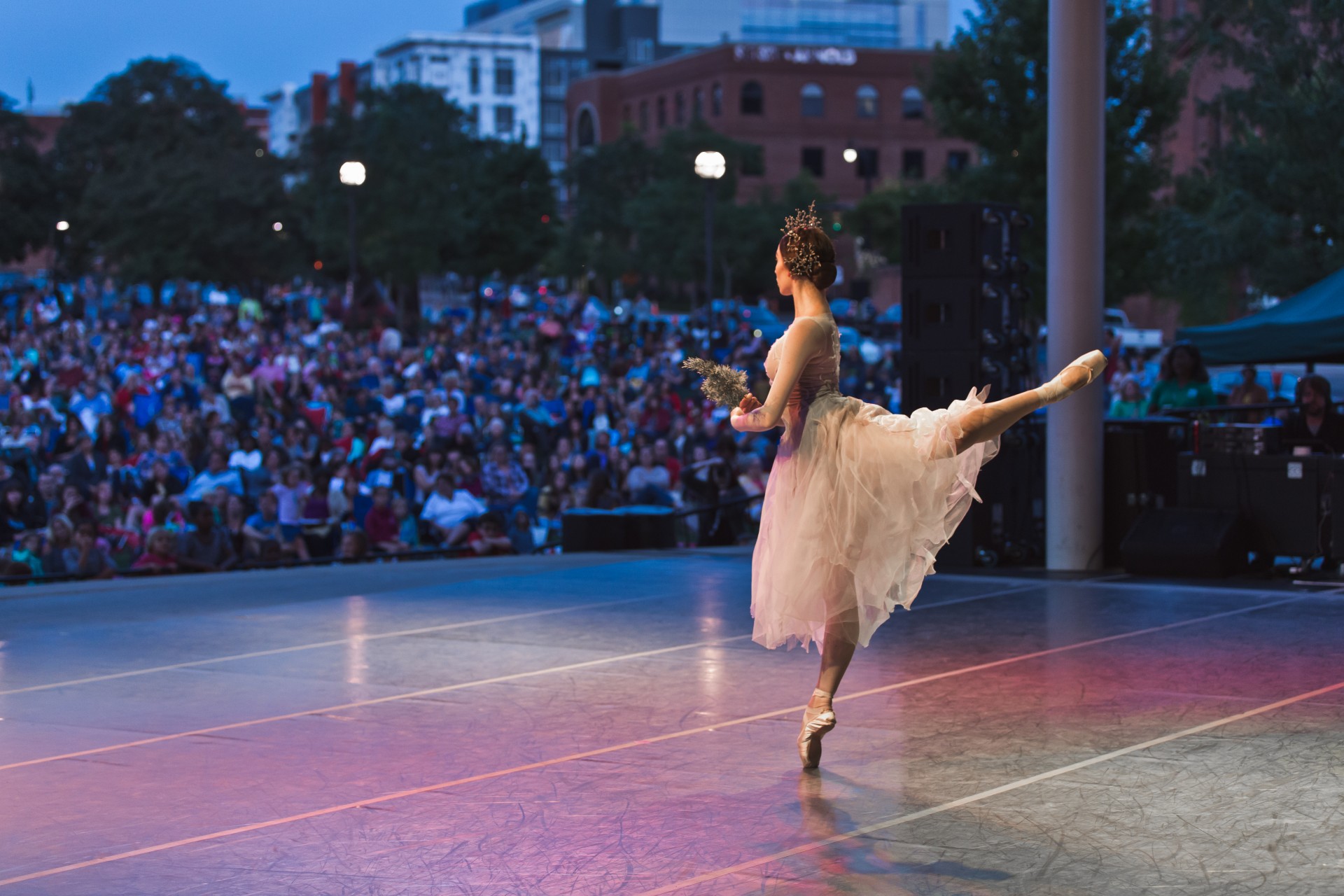 BalletMet’s Friday night’s headline performance at 8:30 p.m. at the Arts Festival is sure to be a highlight of weekend. One of the nation’s top 20 largest professional companies, BalletMet consists of dancers hailing from across the nation and the world and boasts a premiere academy for aspiring professional dancers, one that’s been recognized as an institution of local and national stature.

Since 1978, BalletMet has brought incredible dance to theaters in Central Ohio and beyond and their commitment to bringing dance to the Columbus community, especially in underserved areas, is unparalleled.

From in-school programs to theater field trips, scholarships and free performances, the company is dedicated to making dance accessible to all. More than 10,000 children attend the company’s Morning at the Ballet field trip performances each year. And thanks to a grant from PNC Arts Alive, BalletMet’s second company, BalletMet 2, has performed at free events at the King Arts Complex, Franklin Park Conservatory and more, throughout the 2018-19 season.

In addition to the free performance at the Arts Festival BalletMet will perform at Dance on Dakota on Friday, May 10, from 5 to 8 p.m. in Franklinton. This performance is also free.

Dance on Dakota, co-hosted by Franklinton Arts District, is part of a weekend-long block party in Franklinton and features free food and drink and a collaborative performance with TRANSIT ARTS. The event will take place at Dakota Ave. and Town St.

BalletMet’s Columbus Arts Festival performance will include a mixed repertoire of shorter pieces from its past productions and will be preceded by music from DJ Donnie M. of Damn Girl.

And if these performances capture your interest, the company recently announced its 2019-20 season, which includes ALICE, based on the later stories of Alice’s Adventures in Wonderland author Lewis Carroll, Twisted 3, a collaboration with the Columbus Symphony and Opera Columbus, and, of course, The Nutcracker.

More info at www.balletmet.org. For all your Arts Festival details visit www.colubmusartsfestival.org

Summer camp is a rite of passage wrapped in revelry, rivalry, and romance — all the makings of a must-see soap opera. But when Thurber House (humorist James Thurber’s former home turned local literary center) rushed to push their summer camps online this year, they feared some of that creative connectivity might be lost among aspiring young writers.

Hoping for a hook, camp counselors Justin Martin and Frankie Diederich decided to challenge campers with a genre they’d never tackled before: writing an original soap opera. Entirely on a whim, Martin took to Twitter to see if anyone happened to have a connection to the industry.

“I genuinely didn’t expect it to go anywhere, I didn’t even tag anyone. But an hour later I had half the cast of Days of Our Lives,” recalled Martin, whose disbelief still lingers. It was a plot twist even campers didn’t see coming. “California’s stay-home order was so uncertain, we never knew when everyone might go back to work. Even when we told writers and their parents the night before the performances, some of them didn’t believe us.

Though daytime television isn’t an obvious obsession for middle school students, nearly every novel of young adult fiction is essentially a soap opera. And Days of Our Lives is set in the fictional Midwest city of Salem — folksy yet sophisticated, and never short on scandal, not unlike Columbus, Ohio. It’s a short stretch that only seems non sequitur.

“Everyone started with a blank page, but by the end of the week, Frankie and I had helped them create a complete screenplay. But the cast was still a shock,” Martin explained. “Kids admire anyone who has made a career out of doing something they love, and these actors and actresses were so enthusiastic, flexible, and generous. They were every bit as into it as the campers.”

It was actress Martha Madison who happened to see a retweet of Martin’s request and matter-of-factly replied, “Can I bring some friends?” She soon roped in more than a dozen of her costars, all equally eager to give a bunch of adolescent screenwriters the performance they deserved despite a pandemic.

“I’m a big believer in fate. It was an easy ask, everyone said yes,” revealed Madison, better known to many as Belle Black. Her character’s parents John and Marlena have been synonymous with Days of Our Lives for decades. “There was so much character development, and they all had love and murder in the plot. They were real soap operas.”

Like many nonprofits struggling to adapt, the shift to online programming has actually expanded the reach of Thurber House. Much like parents working remotely, kids from across Ohio, and from New York to California, also received insightful lessons in craft and collaboration from screenwriter Amanda Beall, whose credits include The Young and the Restless, All My Children, and General Hospital.

“If you’re a creative person, none of that goes away just because you’re stuck at home. You can still share your experience with anyone anywhere,” Madison noted. “I was very impressed with the writing. I’d love to work again with any one of these kids someday.”

For more on Thurber House and upcoming events and programs, visit thurberhouse.org

“Some people wait a lifetime to see this,” said Bruce Harkey, president and CEO of Franklin Park Conservatory.

What someone will wait a lifetime to see (or smell) varies from person to person. If watching a massive flower bloom and let out a wretched odor is your thing, you better keep a close eye on the Conservatory.

According to a press release sent out Wednesday, the endangered Titan Arum (Amorphophallus titanum) will flower in the next week for the first time in the Conservatory’s history. The flower can grow to 10 feet tall and emits a strong odor, resembling rotting flesh. While the “corpse flower” only blooms for a few days, those who go to the FPC to visit it will not soon forget it.

And while it may seem that 2020 could not get any weirder with its masks and murder hornets,  this particular brand of weird is actually kind of cool—and it’s in our own backyard.

Check out the FPC social channels, where you can view the bloom live, or head to the Conservatory to smell it in person, though the required mask may prevent a full whiff of the dreadful stench. But if you dare, you can buy your timed tickets online here.

The Columbus Museum of Art (CMA)  has announced plans to reopen in the coming week after closing in mid-March due to COVID restrictions. Though museums were allowed to open on June 10, CMA chose to hold off reopening and will instead see it’s first visitors tomorrow,  June 23, as they reopen for museum members, and to the general public next week on June 30..

To coincide with the reopening, CMA has announced multiple measures to combat the spread of COVID-19, such as significantly reduced capacity, and the introduction of timed tickets, and special hours for at-risk populations.

Tickets for the following week will be made available for sale online each Friday, and an extremely limited number of tickets will be available for day-of admission. While there isn’t a time limit to how long visitors can stay in the museum, there is a one hour entrance window assigned to each ticket.

Visitors will be asked to socially distance while in the space, and face coverings are strongly recommended.