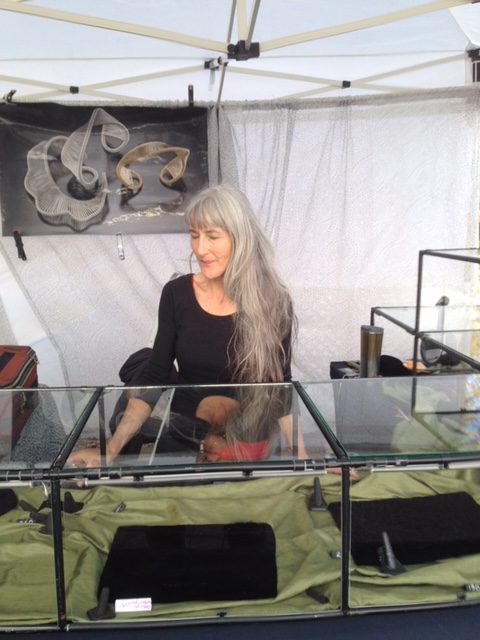 The Columbus Arts Festival showcases the best art and artists Columbus has to offer, but the festival is also a huge draw for artists across the country.

Tana Acton, a fine art jewelry maker from Sante Fe, New Mexico, is one of those artists. Born to two art school graduates, Acton began selling at craft fairs at the age of 16. She would eventually study silversmithing from prominent faculty artists at the Haystack Mountain School of Crafts in Maine. Later, Acton would study goldsmithing in Florence, Italy, earn a BFA in painting at Antioch College in Yellow Springs, Ohio, and complete a fashion design program at the Parsons School of Design in New York City.

Throughout her career, Acton has created work in a variety of mediums, including graphic design, dance and choreography, and painting, as well as fashion design for some of New York’s preeminent companies in apparel and housewares. This background has given her a unique perspective in fine jewelry, pulling from elements of dance resembling movement and flexibility, and elements of fashion design with her metal “threading” technique leaving each piece room to breathe. All of this combines into a beautifully lightweight, contemporary jewelry line.

Jewelry lovers have been collecting Acton’s pieces for years and she often has people approach her at festivals wearing a piece purchased years before.

Acton’s work has been featured in magazines and has appeared on the arms of people news, including Maria Shriver. Her pieces can be found in museum stores, boutiques and fine craft art galleries throughout the U.S., as well as the Columbus Arts Festival Artist Market, June 7-9 on the downtown riverfront, her first time back at the Festival since 2011.