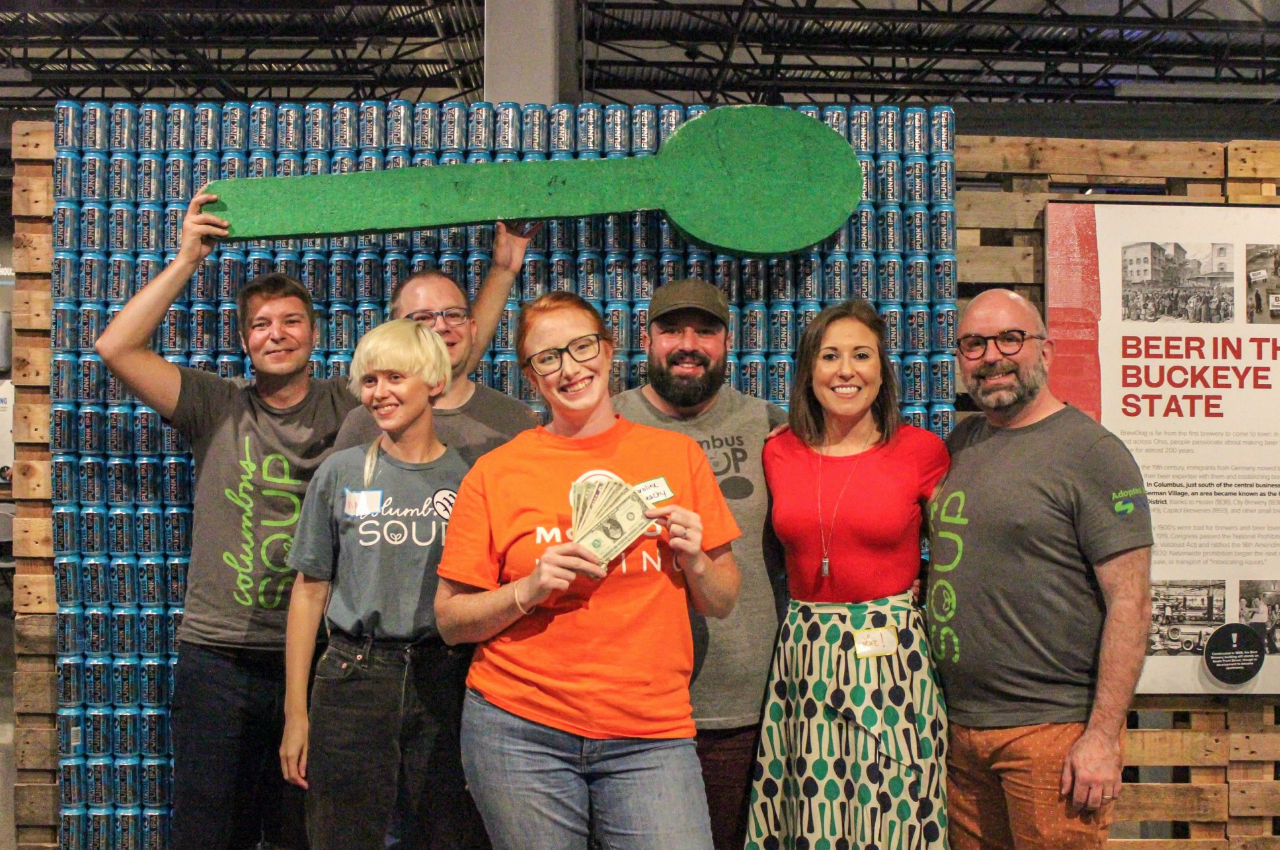 5 ways to give back to the community this holiday season

Columbus SOUP started as a simple concept, borrowed as great ideas often are. Audiences come together to share bowls of soup from local restaurants, listen to pitches from a collection of community advocates, everyone votes with their signature green spoons for the project they want to fund, and the ones with the most votes receive a small grant. Imagine Kickstarter with a supper club spin meets Shark Tank for social change.

“It really struck a chord with me, as something we could pull off, and that would really resonate with the Columbus community,” explained Liz Martin, executive director of Columbus SOUP. “Our city is really receptive to people with a passion for new ideas.”

Introduced through a friend to earlier efforts in Illinois and Michigan, Martin connected a cadre of folks involved in various local community-building efforts over tea on a cold winter’s day to see whether there were enough combined skills and bandwidth to launch a similar SOUP in Central Ohio. Six months later, on June 9, 2013, Columbus SOUP hosted its first event, amid more than a little uncertainty.

“We thought if 35 people showed up, it would be a success. We reached out to people we thought might be interested and received six applications,” she recalled. “All of them were invited to pitch, and we packed the house with more than 100 people at Brothers Drake.”

The idea undeniably resonated and grew to nearly two dozen events in the years that followed—and nearly $60k in grants so far. But it also offered the invaluable experience of distilling an idea down to its essence, then selling it to an audience of strangers with a succinct and inspiring pitch.

“The heart of SOUP nationwide is to fund projects that may not be eligible for traditional funding. These micro- grants give people exactly what they need to achieve something small, yet impactful, in their communities,” Martin explained. “Most of us grew up in an age of giant checks where it seemed like only the wealthy could be philanthropic. SOUP brings philanthropy down to a level where anyone can make a difference.”

Themes quickly became a concept unique to Columbus SOUP. Chicago’s version was created to support arts and culture, while Detroit’s was adapted to serve social justice. Columbus SOUP is both, yet neither, providing access and an audience to a variety of community-led projects that don’t always fit easily into obvious boxes.

Also there since the start is Bryant Miller, director of Columbus SOUP, and among the first folks Martin recruited to the cause. His infectious enthusiasm and knack for putting everyone at ease was also the perfect match as event host, welcoming new and familiar faces, ensuring presentations run smoothly, and sharing the results of voting in a way that recognizes everyone’s efforts—not just those who receive funding at the end of the evening.

Crowdfunding and collective philanthropy only seem like a novel idea inspired by the internet. But the notion of ordinary folks doing extraordinary things with a humble investment is hardly new. Back in 1938, the National Foundation for Infantile Paralysis was still a small and obscure organization that needed a boost, even in the midst of a polio epidemic. That’s when radio and film comedian Eddie Cantor asked Americans from all walks to send 10 cents to the organization’s founder, President Franklin Delano Roosevelt. The response was unprecedented, with tens of thousands of letters pouring into the White House the week of FDR’s birthday—just as Cantor requested when he coined the phrase, the “March of Dimes.”

The indelible idea stuck, eventually becoming the name of the organization now focused on providing a healthy start for new mothers and their infants. That sounds like a tall order, but so too was curing polio with pocket change.

Without hyperbole, Columbus SOUP is not so different, offering a solid start to ambitious initiatives with a donation many of us have in our wallets, pooled together to achieve something no one could do alone. SOUP has likewise accomplished its original goal to inspire grassroots ideas and small-scale investment, which is why the next Columbus SOUP will be the last, putting a proverbial lid on the concept and making room for what’s next.

“It’s easy to get hung up on the idea, and many do, that organizations need to go on forever to be significant, and I just don’t believe it. I tend to think of it like a story. What story did we set out to tell? We wanted to share philanthropy in a completely different way,” Miller explained. “We loved the concept behind micro-grants, because they create the opportunity to be the very first group of people to believe in an idea. We feel really good about what we’ve achieved and have accomplished everything we wanted to do. That’s our story.”

Everyone has watched a television series or film franchise that effectively ended long before it was over. Columbus SOUP didn’t want to make that mistake by presuming everything worthwhile extends indefinitely. But they’re really only half right. If every event was like a pebble thrown into a pond, the ripples continue to make waves that grow, intersect, and change shape long after the stones were cast. Quantifying the lasting impact six years of SOUPs have had on Columbus is impossible, because the ripples just keep going.

“I think about how distraught everyone was when Independents’ Day ended. All of that energy didn’t go away, now it just goes somewhere else,” he noted. “When you look at all of the new events and festivals inspired by Independents Day that only started after it ended, you can still see the impact.”

The final event, billed as “SOUP’s Last Hurrah” was originally set for November. But an accidental scheduling snafu afforded the opportunity to extend the application deadline, ensuring everyone from presenters to donors won’t miss their chance to celebrate, say goodbye, and raise their spoons one last time.

“We decided the final Columbus SOUP should end how it started, without a theme. We’ve had projects reach out to us that never quite fit into one of our recurring events or common categories,“ Martin explained. “It’s a chance for all of those ideas to finally be heard. This will be the last Columbus SOUP, but it’s still the beginning of something new.”

For details on Columbus SOUP’s final event, or to apply to pitch your idea, visit columbussoup.org