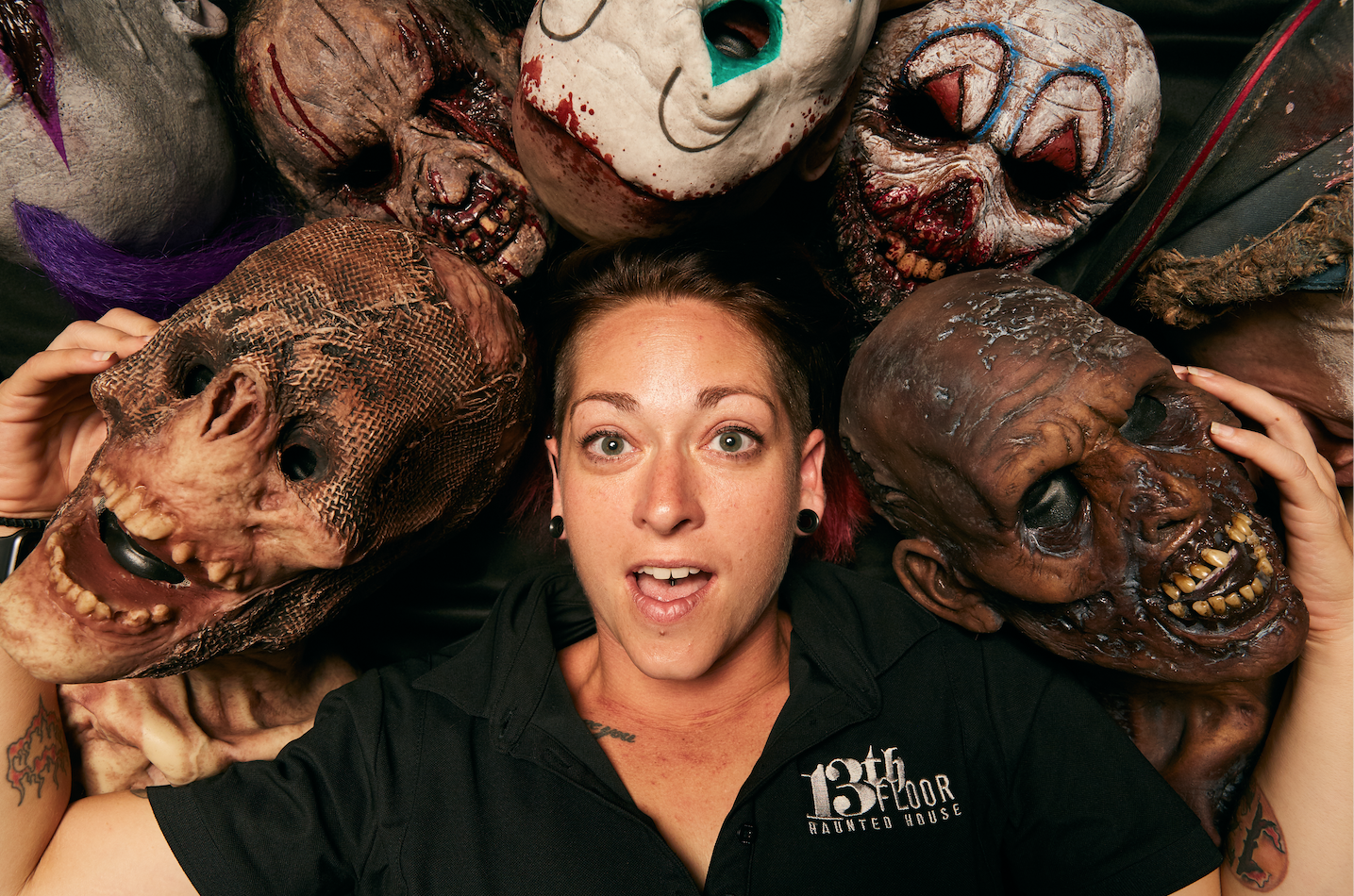 Like many a fiend of silver screen fame, the origins of Kelly Collins’ career in terror involve some teens, a campground, and a fateful ride into the deep, dark woods.

Thirty-eight years ago, Collins was general manager at a campground. Every Saturday at noon, he’d hook up a wagon to a tractor and treat the young campers to a hayride through the woods. The route Collins followed circled around an old oak tree, before turning around and coming back to the start. One Saturday, some mischievous teens sprang out from behind the tree, giving quite a scare to the unsuspecting wagoneers. All of the children screamed in surprise—then they laughed.

This gave Collins an idea. To spice up his little hayride, he would arrange for the teens to act out the same routine the next Saturday— but this time, he’d up the ante by giving them rubber masks to wear. His plan was set in motion, and this time, the startled youngsters on the wagon cried all the way back to the campground.

“That was a bad idea, but it got me thinking…Why don’t we have a hayride at night and call it the ‘Spooky Hayride?’ ” Collins recalls. By fine-tuning the balance between fear and fun, Collins’ new enterprise was a success, and would set him on the path to a lifelong career in the haunted house business, or “haunting” as it’s known to its practitioners.

Early in his career, Collins became a key figure in the Central Ohio scream scene. After his haunted hayride, he spent a couple of seasons overseeing the Hallowscream event at the now- defunct Wyandot Lake. It was there that he was approached by Ken Schnacke, General Manager and President of the Columbus Clippers baseball team, who tapped Collins to create and lead the “Terror Park” event that was held at Cooper Stadium for a decade.

When the Clippers made the move to Huntington Park, the Terror Park event was shelved. Collins set out again on his own, founding the Scareatorium: a haunted house attraction occupying a 40,000-square-foot space in a northeast Columbus strip mall.

Over the next decade, the Scareatorium would serve as a hub for haunters, attracting and nurturing some of the city’s top talents in the field. From actors, makeup artists, set designers and people who just appreciate a good scare, the group that grew from Collins’ enterprise came together over buckets of blood and latex viscera, but now enjoy the valuable connection of a genuine community.

A longtime compatriot of Collins, Keith Newsome was one of the creative minds behind Terror Park and the Scareatorium. Though he specializes in visual effects design and fabrication, Newsome’s talents in haunting are wide-ranging. Since retiring from 13th Floor, Newsome has remained a vital member of the community, teaching classes on topics ranging from makeup application to mask making and performance.

This season, he’s lending his skills to an attraction in Lancaster, Ohio titled “A True American Haunt: Birth of a Nightmare.” The house is set up in the Miller Building, a “poor house” originally built in 1828, which event promoters suggest may in fact be haunted. According to Newsome, the building is classified as one of the top-10 haunted houses in the United States, and was recently filmed for an upcoming episode of The Travel Channel show Destination Fear.

“It’s actually a haunted place. I don’t believe in that crap…I do now,” says Newsome. “There’s something in that place. I don’t go on the third or fourth floor anymore.”

Whether patrons can expect to encounter bona fide spirits along with latex-clad actors in this haunt remains to be seen, but whatever the case, the event serves an important purpose. All proceeds from this haunt will benefit Habitat for Humanity’s plan to revitalize the historic Miller Building, and to help build housing for local veterans.

The charitable angle for this event comes as no surprise in an industry that at times seems like an extended family. People attracted to haunting come from every imaginable background, but are united by a common passion.

“I’ve had people who are financial managers of huge companies, down to people who are almost homeless,” says Newsome. “The cool part about it is that we treat everybody equally. When you walk in, you’re automatically family.”

One member of Newsome’s haunt family is Bobbi Jo Gonzalez, an artist who has turned a passion for body art and makeup into a year-round career.

Gonzalez’s first foray into the industry came while volunteering with her eldest daughters at a home haunt. Stepping up to fill the need for a makeup artist, Gonzalez gleaned what she could from YouTube videos. Her tool kit at that time consisted of, as she calls it, “that really crappy makeup you get at Kroger around Halloween.”

After encouragement from her peers at smaller attractions, Gonzalez eventually made her way to the Scareatorium, where she met Newsome. Newsome introduced her to higher-quality, water-based makeup, and she went on to mentor under the more experienced effects artist for two years.

Like her mentor, Gonzalez sees the past support and encouragement from members of the haunt community as a foundation of the success she now enjoys.

“It’s something that we’re all passionate about, so once you find your niche in that community, it doesn’t matter what your background is, what your religion is, what your sexual orientation is—you have that weird background, and you have a family for life,” Gonzalez explains.

While basking in the warm embrace of your fellow ghoul is reason enough to keep some hooked on this line of work, there’s another essential element that unifies all haunters: the love of the scare.

“I fell in love. I didn’t know you could have so much fun scaring people,” says Ashley Shilling, another former employee of Collins from the Sacreatorium days who today serves as general manager of the 13th Floor Haunt.

“Being an actor is a huge stress relief,” Shilling explains. “Getting to scare people kicks in your endorphins, especially if you can make a big man that looks very intimidating scream like a little girl—that’s a lot of fun. At the end of the night, you’re just relaxed.”

Whether drawn to a sense of community that can sometimes be hard to find in the world at large, or simply in it for the thrill of scaring people, the haunting industry has an undeniable pull for those that find their way into its spooky ranks. Even retired industry veteran Collins is unable to fully step away from the work, and is gearing up for his first season as manager of a Spirit Halloween supply store in Newark, Ohio.

“When you scare people, and they scream and run away from you, it’s a great way to let out pent-up frustration,” Collins says. “You could have the worst day in the world, and within a few minutes of working at the haunted house, you feel so much better. It’s a great tension reliever.”

In professional haunting, one person’s fear is another’s bliss.

For more information on the 13th Floor Haunt and other haunted houses happening in October, click here.