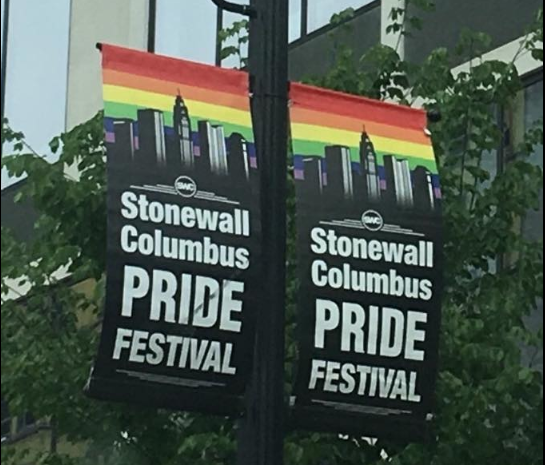 STONEWALL 50 YEARS: A look back

In 2017, tensions flared revolving Columbus Pride, but it introduced a greater conversation; one involving healthcare barriers, intersectionality and even racial discrimination in the LGBTQ community. Virally known as #BlackPride4, four queer and trans people of color were arrested during the Columbus Pride Parade that year. Misconstrued as an act of resistance, the group formed to protest the rate of trans women of color who were murdered in 2017, along with the indictment of Minneapolis Police Officer Jeronimo Yanez who shot and killed Philando Castile just one year prior. The Black Pride 4 was spat upon and heckled. Soon after the protests, then-Stonewall Columbus Executive Director Karla Rothan retired.

“Watching everything happen from afar was heartbreaking because I was seeing my community falling apart, and the people I cared about divided against each other,” says Dwayne Steward, Director of Prevention at Equitas Health and mentor to Wriply Bennett, a member of #BlackPride4 who was arrested. “I truly believe Black Pride 4 was the best thing that could’ve happened to Columbus. It forced the LGBTQ community to take a long hard look in the mirror. Because of the truths that have been forced, because of the bravery of the protesters that day, I’m finally seeing the change that many of us have been fighting so long for.”

Noting that Black Pride 4 brought upon awareness from a community standpoint, Stonewall President of the Board of Trustees Robert Podlogar recounts strategies that came into place following the 2017 Columbus Pride Festival.

Now, the recent 10,000-square-foot expansion of Stonewall Columbus’ new community center is a sign of an organization with a new vision, one in which inclusion and its barriers can be addressed.

A member of Stonewall’s Board of Trustees, Drew Moss, a Licensed Professional Clinical Counselor and a Licensed Independent Chemical Dependency Counselor for Maryhaven treatment center helped open Maryhaven’s Addiction Stabilization Center on South High in 2018. Moss agrees with further pushing efforts to treat those who are queer, transgender and gender non-conforming.

“The healthcare system as a whole is making better efforts to understand the LGBTQ+ population, to educate providers and try to be more inclusive and think about different ways to engage people. I see a real concerted effort with that, especially in the last ten years, I would say,” Moss says. “We need to find a pathway toward greater visibility for LGBTQ+ people in every industry. I think the more visibility we have, it does begin to change people’s minds and hearts about this issue. Providers of any type of service need to be competent in different engagement strategies.”

In terms of dedication to creating communities of inclusion, especially for queer people of color, Steward admits that Columbus still has work to do to improve resources. “Currently, I am focused on dedicating my time to breaking down barriers and creating access to healthcare and social services for underserved communities. I’m also very passionate about ending the HIV epidemic that is currently affecting the most marginalized in our communities,” Steward says.

“We have the tools to end the HIV epidemic once and for all. PrEP (or pre-exposure prophylaxis) is a once-a-day pill you can take to prevent yourself from contracting HIV. If someone who is HIV positive is taking their medications daily, they can reach an undetectable status and are not able to pass the virus to anyone else. If everyone who needed these medications had access to them, we could stop HIV. The only thing keeping us from getting to zero new infections and zero AIDS-related deaths in Columbus, in Ohio and in this country, is health inequity.”

While fractures may exist in Columbus’ LGBTQ+ community, it is still a community of positive experiences.

“I remember being younger and having people yell out or throw things and essentially harass me on the street and people that I was with for being who we were. That can be very damaging psychologically,” says Moss, who came to Columbus from Lima. “I embraced myself by coming to a community [where] I could see myself in other people and vice versa. I think moving to Columbus was the biggest catalyst in a long journey towards self-acceptance.”

Crediting the Short North and South End for rigorously encouraging acceptance in the LGBTQ+ scene, Podlogar agrees with Moss’ thoughts. “We’re fortunate in Columbus over the past couple years, especially with so many corporations, small businesses [who are] really providing a safe place for the LGBTQI community, for being who we are,” he says. “I am thrilled for the vast amount of acceptance for our community, things I did not feel when I lived here in the early 90s. I am so proud to be able to, in an open work environment, talk about my personal life, my husband, our marriage and the relationship that we have.”

There’s still hope for marginalized communities to make their voices heard during Pride month, especially with the emergence of conversations that bring about opportunities for action and awareness. For Steward, this means adopting alternative safe spaces that aren’t directly involved with Columbus Pride Festival, including healthcare space Mozaic for transgender, gender non-conforming and non-binary youth of color along with social and wellness space UNITY, geared towards queer men of color.

“I was bullied at school for both identities and I was being raised by devout Pentecostal parents and in a church that believed my existence was sinful. It was a long road to acceptance not only for my parents, but for myself,” he says. “When we create spaces for queer people of color where they are able to escape the constant microaggressions and ongoing discrimination they face daily, you’re providing a unique opportunity for someone to fully live in all of their authenticity.”

Moss concurs that Black Pride 4 gave room for discussions to be initiated, even if they are discomforting, as it will allow Columbus’ LGBTQ+ community to prevail equally. “Karla’s decision to retire gives us an opportunity to look at the community through a different lens and to take in some different viewpoints. Any time there’s been a leader at an organization for a long time, it may be challenging to do that. I think it gives us an opportunity to learn a lot from what’s happened,” he says. “I really would love a day where the table belongs to everybody and they know that they can come whenever they need to. That’s my vision and my hope. I’m really proud of the work that Stonewall is doing to create that world.”