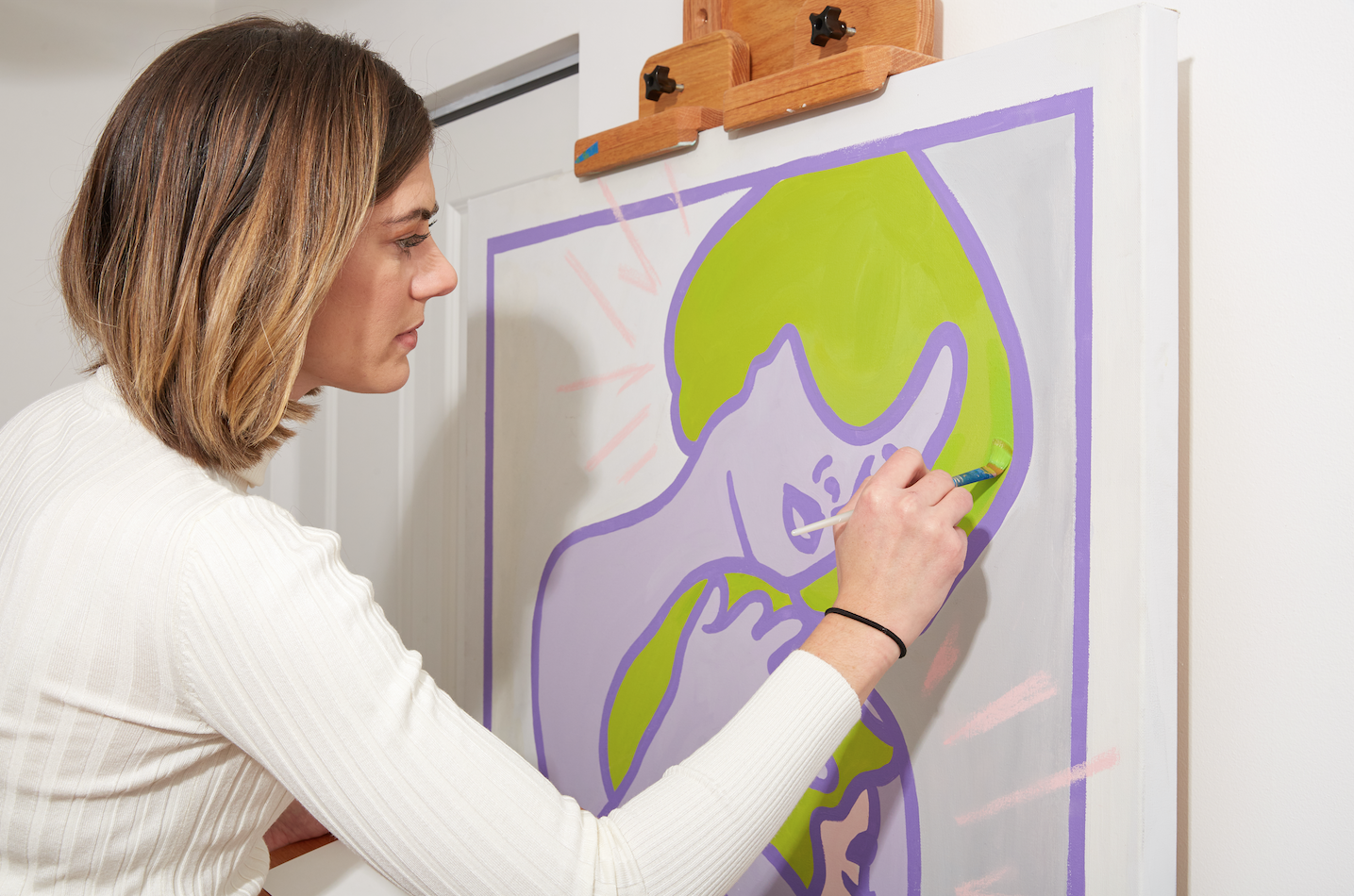 Map: Local man thinks he has the answer to Ohio passenger rail

In the ‘60s, the clash of mass culture and fine art exploded. Led by New York-based artist Andy Warhol, whose silkscreen paintings of Campbell’s Soup Cans and Marilyn Monroe were instantly iconicized, the vibrant basis of his works became known as pop art. While Warhol was one of the founding pop art leaders, the lesser-recognized Roy Lichtenstein was a Fine Arts graduate from The Ohio State University in 1949 and was notable for his comic-like expressionism.

Subtly following Lichtenstein’s influential trajectory is visual artist Danielle Deley, who’s currently prepping for her Skylab show Jubilee. Her use of color is rich in tone, and her subjects are easily recognizable, with cultural nods to Frank Ocean, Barbara Streisand and the late David Bowie as Ziggy Stardust.

“I want Jubilee to feel like you’re walking back into the height of the pop art era. I might have a more muted color palette than Lichtenstein, but I want it to make a comment about traditional fine art,” Deley said. “Each of the 2D pieces are based off of very popular sculptures in Greek and Renaissance art. Each 3D piece is taken from paintings from that same time period.”

Originally from Youngstown, Deley graduated from CCAD in 2011 with a BFA in graphic design and advertising. Spending a semester in England while she attended CCAD, Deley regularly kept in contact with her grade school art teachers, who provided encouragement and foundational skills. Their guidance led her into becoming co-president of the Columbus Society of Communicating Arts, and even illustrating Chicago Mayor Lori Lightfoot on a cover of Chicago Reader in April. Through Deley’s intricate, pastel design, Lightfoot is recreated into a queen of spades form.

“Sue Kwong, the creative lead for the Chicago Reader, reached out, had this awesome cover idea and wanted me to bring her vision to life,” Deley said about the collaboration. “She found me on this forum called Women Who Draw, something I submitted to six years ago. They make a space for female artists and illustrators to find other female artists and illustrators. [Illustrating the cover] probably took eight hours. It was my first cover illustration for a big publication so I wanted to get it right.”

Often visiting Gateway Film Center to see how films are composed, Deley actively studies the meticulous craft of cinematography, along with going to intimate gallery spaces to align with the art community. After graduating from CCAD, Deley would only create on her computer, but decided to transition her work into watercoloring. “[Watercoloring] then moved into gouache, wood carving, and finally painting with acrylics. My style started to take shape just from doing these small projects that popped into my head,” she said. “My first one was The Young and the Restless illustration that I have on my website and I just couldn’t stop. The style stayed the same but I would push myself with composition, size, and color.”

Currently contracting as a designer at independent digital design Studio Freight, Deley also co-created the “mind reading” board game Medium, which Two Dollar Radio attendees had the chance to celebrate and play after its release. In August, Delay also illustrated children’s (and dog lovers) book Good Night, Buckeye with author Dan Wurth, with all proceeds from the book benefitting Canine Companions for Independence. With Deley’s hectic creative schedule, Jubilee could have become an afterthought, but she assures (614) that the show’s creation was intentional, with retrospective, familial ties.

“I came up [with] the name [of Jubilee] for two reasons. One, Jubilee came from the idea of celebrating. I thought it was time to celebrate this style I’ve been creating,” she said. “And two, it’s an homage to my grandparents. My Baba would always make this rich and delicious cookies called ‘jubilees’. They were always doing a craft with me or when I would come visit they were creating something.”

With appreciation for local art venues such as 934 Gallery, No Place Gallery and Roy G Biv, Deley avidly wanted for Jubilee to be placed in Skylab, ready to share her “post-pop art” genre with Columbus. “Skylab was the perfect space to propose this show. Its view of art has always been contemporary and experimental, and that’s how I view everything I make,” she said. “Contemporary art for me is about making things weird and beautiful at the same time and that’s how I hope people perceive Jubilee.