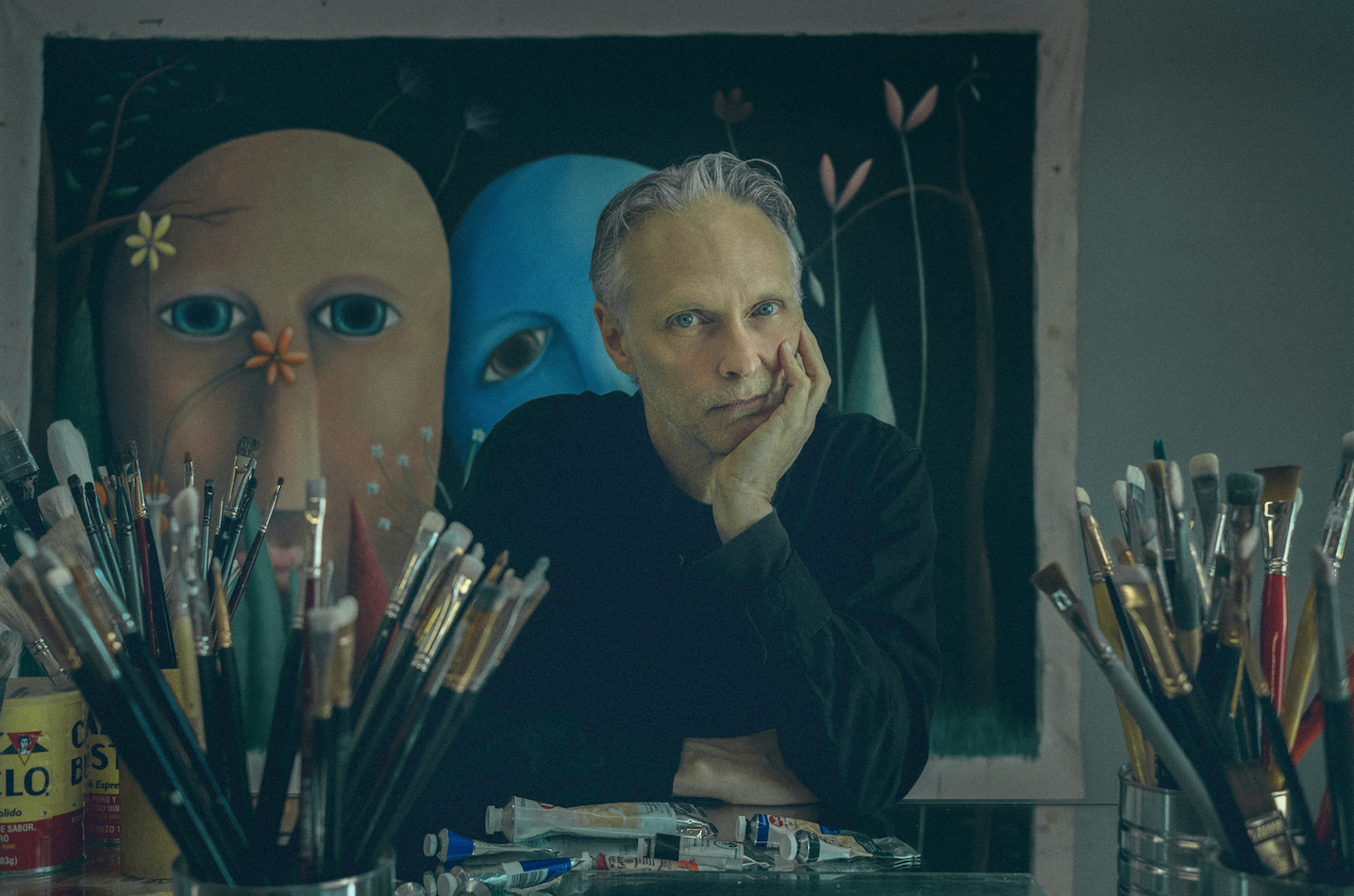 When approaching the canvas, the first thing that expressionist painters attempt to draw from their audience is emotion. Whether it stems from Disappointed Love by Francis Darby, where a forlorn lover is cast off into a forest to wallow in grief, or anxiety-riddled painting The Scream by Edvard Munch, painter Craig Carlisle has challenged his work for years to portray similar elements. After 30 years of creating thousands of paintings through the study of expressionism, Carlisle’s focus is generally based upon meditative habits as observed through his signature Big Head series.

“Evoking emotions from the viewer is one of the more important components of what I feel is an effective work of art. Is the artwork immediately drawing me closer or pushing me away and why? Possibly, [when] the colors chosen by the artist stir up my emotions, even in a minimalist painting, I feel that is possible,” says Carlisle, noting Agnes Martin as a ‘master colorist’ with a subtle tug at his viewers’ emotions. “Upon signing the painting and releasing it into the world, I truly believe [that] whatever emotional message the painting is meant to serve will be captured by those who need it. However, as the artist, I deserve to express what I am feeling without limitation. Every painting has its soulmate and eventually it will rest in the perfect hands.”

In his prime, Carlisle was deliberately fixated on creating optimistic paintings, with subjects depicting happiness, but later found that his audience gravitated towards honest interpretations. This also broke Carlisle out of the routine of being bound to artistic recurrence, having the ability to grow beyond his previous limitations. Intentionally leaving his Big Head subjects as genderless, as his subjects usually have oval-shaped heads and doe-like expressions, Carlisle uses the background of the painting to construct where the subject’s real emotion may be analyzed. These paintings often have neutral expressions, but the framework for each one is ever-changing.

“My personal relationship to removing gender in my artwork today is the same as it was with my first Big Head painting in 1992. If I choose to show gender, then the viewer immediately begins down the road of judgement,” Carlisle says. “Everyone deserves a stage to express their freedom, mine happens to be a canvas. For those defining their gender today, I hope they say let me choose, let me learn, let me grow, let me fall, for then I will succeed.”

Raised in Oklahoma in his formative years, Carlisle repetitively drew superheroes and made red clay sculptures, as his mother, also a painter, ensured that her son was always creating. Carlisle also observed his grandfather building furniture and even creating artwork with stones and gems. Building an aptitude for art, especially painting, Carlisle relocated to Columbus at 12 to further his art studies.

After graduating from CCAD in 1989, his original Big Head paintings in 1992 to 1995 were painted above subliminal messages on the canvas, regularly created at the former Buggyworks Studio warehouse. Steadily transitioning to different studios in New York, San Francisco and later, Los Angeles in the early 2000s, where he painted the Pink Monsters series as a response to the 9/11 attacks, Carlisle’s work became redefined as he adapted to each environment. With Nashville, Tennessee as the home for his 19th century farm and studio in the countryside, this month, Carlisle will be returning to Columbus for his first city-based solo exhibition in five years, this time, at the Sarah Gormley Gallery.

“I not only wanted a chance to reconnect with my many collectors in the city, but I knew Sarah’s gallery would give the opportunity for me to showcase my new larger paintings.

These works include hands overlapping the faces of the Big Heads,” Carlisle says. “In the early 2000s, I did a series of red gloves and began to understand more in depth that for me they symbolized protection. The hands, or gloves, were always placed in my paintings during times when I personally needed to feel a stronger sense of protection, especially from God. The paintings in this exhibition are not documented as “the hand of God” but it’s what I tell people when they ask. Think of it also as a guardian angel; maybe it’s there to stop something negative from entering, or it’s protecting me from myself.”

Choosing bright reds and oranges in a majority of paintings showcased at Sarah Gormley Gallery, Carlisle is challenging himself to push the extremes, considering all his work to be self-portraits. As a portrait technician, Carlisle also assumes responsibility as a provision for Columbus art, celebrating the city’s constant growth in tandem with an understanding of his own work.

“I was part of the art scene in Columbus in the 80s and early 90s, so I have seen many changes. One thing that has never changed is the incredible support the city provides for the arts community. Having lived all over the country I can easily say that Columbus is one of the most supportive cities in the country for artists, especially young artists,” Carlisle says. “For people who are just witnessing my work for the first time I wish for them to be able to experience emotions. I don’t need them to analyze what they think I was feeling at the time I created the artwork; rather I ask the viewer to listen to their own reactions or feelings and know that is why I made the painting.”