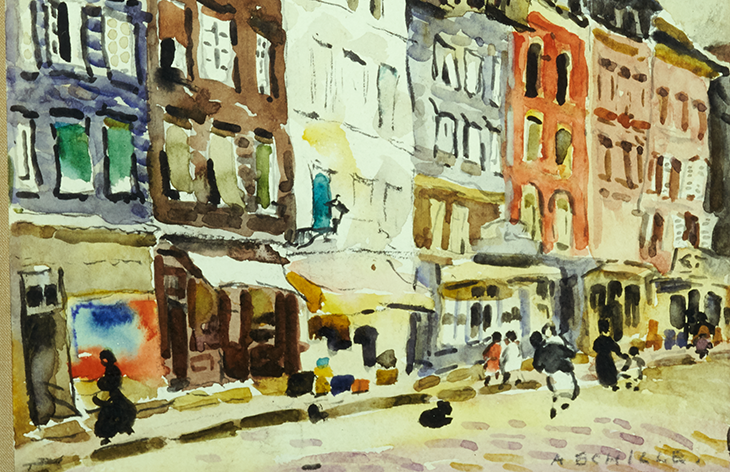 Situated atop a library on the campus of Capital University in Bexley is a hidden gem among the local arts community: The Schumacher Gallery.

In spite of its location, any perception that this space is intended solely for the enjoyment of the student body at Capital must be laid to rest. With works from such heavyweights as Picasso, Rodin, and Gauguin on display as part of the gallery’s permanent collection, Schumacher is a must-visit destination for art lovers throughout the city.

For its latest exhibition, The Schumacher gallery has chosen to highlight an important figure in the history of the arts in Columbus on the occasion of her 150th birthday.

“Alice Schille was a woman who painted and traveled internationally before women had a right to vote. That’s fairly unheard of for that time, and she was very prolific and internationally known,” gallery director David Gentilini says of the artist whose small watercolor works are on display for this exhibition, titled Gems of Brevity.

Schille was born in Columbus on August 21, 1869, and is known for her complex and versatile style of watercolor painting, which she developed during travels throughout North and South America, Europe, and Africa.

This exhibition of her work was curated by Keny galleries in German village—considered the premiere Schille authorities in Columbus— in conjunction with Columbus Museum of Art, which has its own exhibition of the artist’s larger works on display through mid-September.

With pieces dating from 1914-1935, Gems of Brevity features miniature watercolors produced by Schille in a variety of locations such as France, England, North Africa, Guatemala and Santa Fe, New Mexico. These small-scale works range in style from Impressionism to Post Impressionism to Cubism.

“She was a Columbus artist who lived on Bryden Road, between Capital and the Columbus Museum of Art. You can drive right by her house coming from one institution to another,” says Gentilini. “For Columbus to have this happening, everyone playing in the same sandbox celebrating one of our biggest artists—I think it’s a pretty cool thing.”

Alice Schille’s Miniature Watercolors (1914-1935): Gems of Brevity runs September 3 to November 20, with an opening reception Thursday, September 5, from 5:00 to 7:00 p.m. The exhibition and opening reception are free and open to the public. For more information, visit https://www.capital.edu/schumacher/