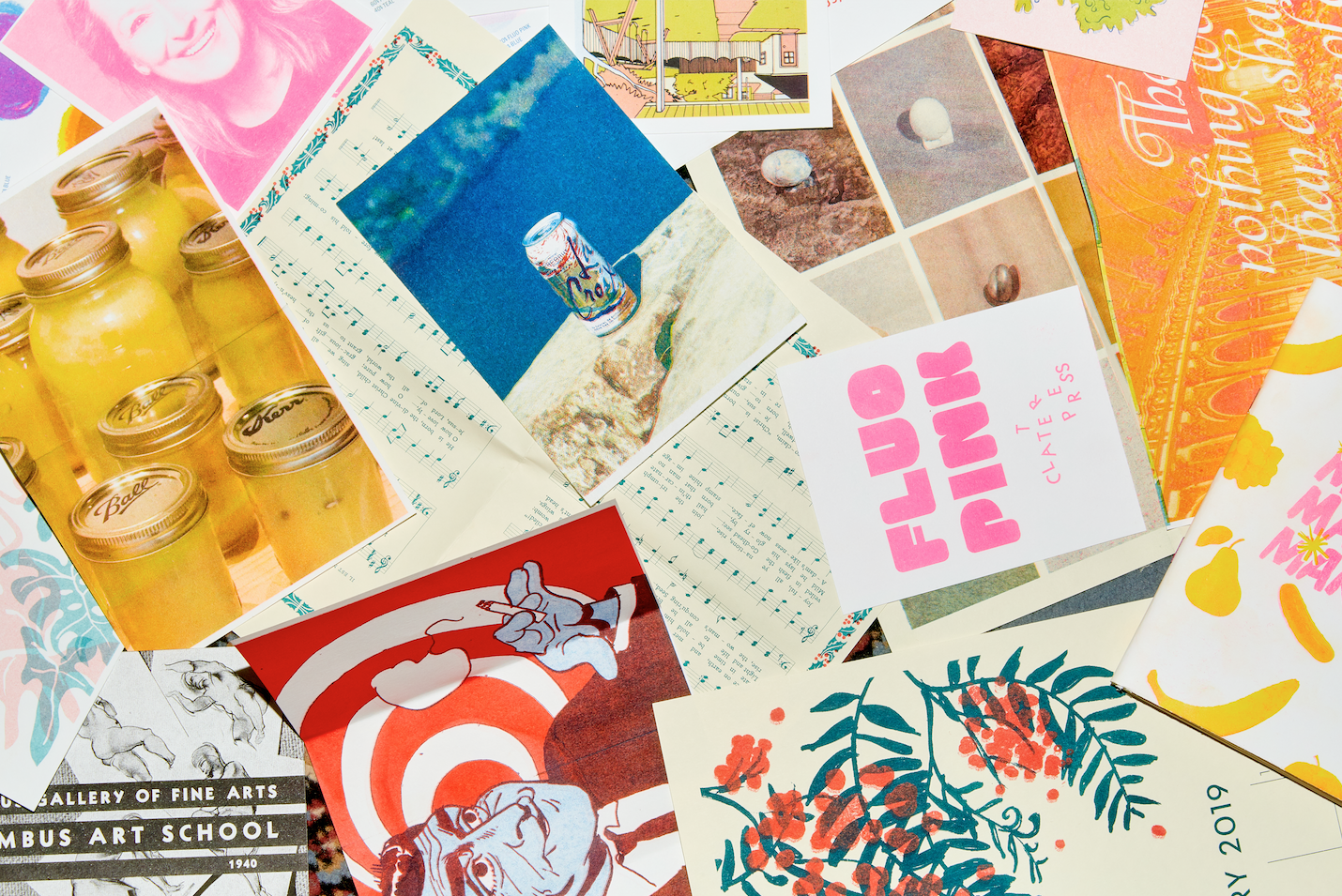 Apple Of Our Eye: 6 u-pick orchards around Columbus

From moveable type to Xerox to 3-D, printing has always been a game-changer.

Several years ago, Columbus graphic designer Nigel Ewan saw a zine with an “impossible” hot pink color that he knew he couldn’t replicate with an inkjet or laser printer. The printmaking game changed for him as well.

“I was curious enough to investigate the print method— it turned out it was riso, and that pink color was possible because risograph printing uses specifically-chosen inks as opposed to mixing toner or CMYK inks together to produce a spectrum,” said Ewan.

Nigel teamed up with his sister Dempsey, and the two began the onomatopoetically- named Clatter Press, exploring the possibilities of risograph printing to create unique items in small numbers. Risograph printing is not completely unlike mimeograph or silk screen printing, in that the risograph uses a stencil and ink color that is applied one layer at a time, resulting in an often imperfect, but exciting and authentic image. Clatter Press now features the Fluorescent Pink (along with five other colors available for designers) that originally caught Nigel and Dempsey’s attention. (You may have seen a pink photo of Meryl Streep that has made its way around Columbus.)

(614) recently spoke with Nigel and Dempsey to learn more about this unusual printmaking technique and what it can be used to do.

(614): Can you explain the technology and the process behind the risograph?

NE: In risograph printing, a stencil is created in a thin paper which then is wrapped around a cylindrical ink drum. When the drum rotates, ink is pushed through the stencil onto paper to produce an image. This whole process happens inside a large machine made by a Japanese company named RISO, hence “risograph.” Riso printing is extremely environmentally friendly. Stencils are made from rice paper and ink is soy-based. No solvents or heat are used in the printmaking process and all consumables are recyclable.

Is this your primary gig, side gig, or hobby? How did it come to be?

NE: We are a brother-sister team and Clatter Press is a side gig for both us. I am a full-time graphic designer and Dempsey is finishing up her graphic design BFA at [Columbus College of Art and Design]. It’s also definitely a hobby for us; neither of us had ever done any riso printing before we purchased our machine. We wanted to use this technology ourselves to push the limits of our own creative practices. The entire shop is set up in my Clintonville basement—it took four of my friends several hours to get the machine down my narrow basement stairs—so it’s very much a cottage industry. But we love where we are and are excited to continue growing our business.

What sort of projects are ideal for this medium?

NE: Although the RISO company markets its printers as office equipment, the technology is much better suited to creative applications. Artists and designers are drawn to riso because the ink is real ink—wet, oily, gooey—that gets applied to paper in a style more like fine art printmaking than office printing. Misprints such as smearing, roller marks, and mis-registration (different colors not perfectly lined up) are common. This is all part of the appeal. Another appeal is that riso is cost-effective: once a stencil is created, the per-print cost is very inexpensive.

The riso does really well at replicating all sort of mark-making. It can be used to produce sharp digital graphics, smooth gradients, organic marks such as charcoal and graphite, halftones, and even photography.

What ingredients come together to make Columbus fertile ground for makers, designers, and creatives?

DE: Columbus doesn’t always feel like it has the street-cred of older, cooler cities like New York or Chicago, but the upside of this is that everything here feels on the brink of something exciting and new. There is a lot of energy and opportunity in Columbus which seems to be emanating from all of the amazing people who have made Columbus their home and livelihood. We have so enjoyed the people Clatter has introduced and connected us to. Being able to watch so many people we call our friends pursuing fulfilling creative work is really encouraging—and makes us want to always be creating as well. Columbus seems to have boundless energy and this makes it the perfect fertile ground for creators.