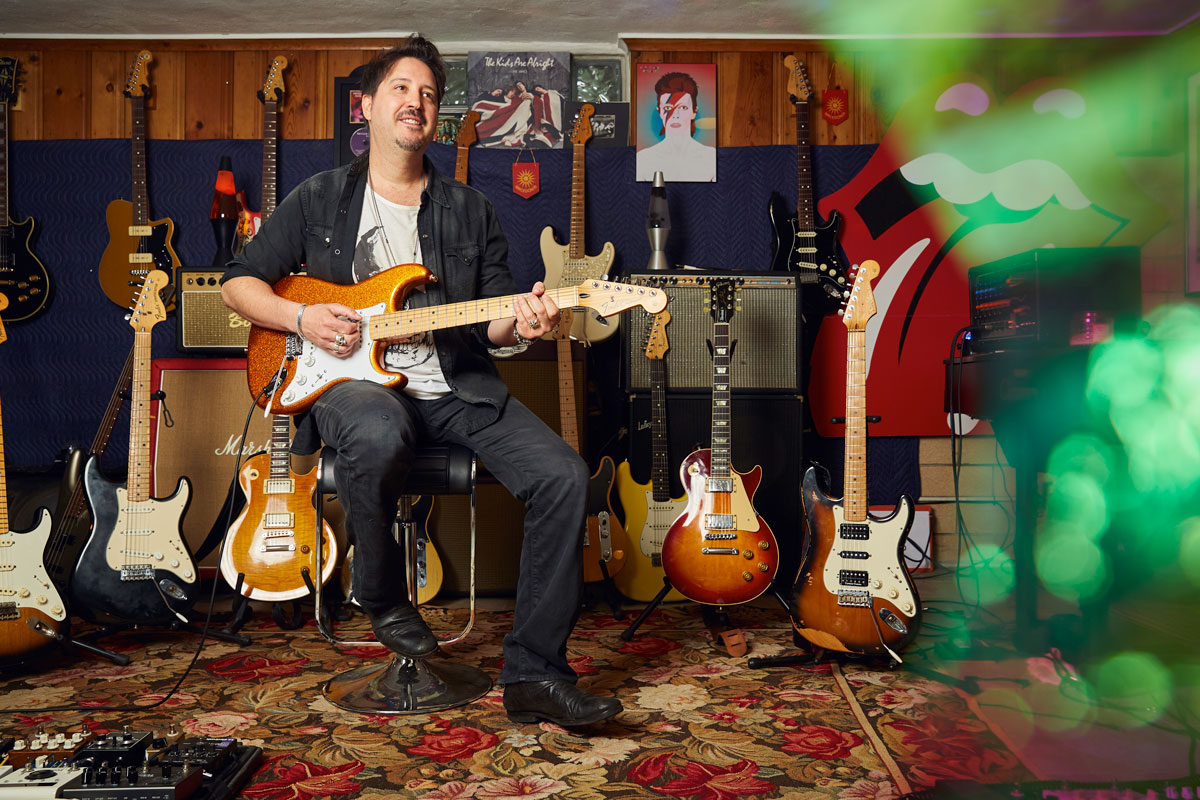 Like countless children of the 80s who felt inspired to pick up an axe and shred, Kris Misevski holds a deep appreciation for the prodigious riffage of Eddie Van Halen.

“Eddie made me want to play guitar. Jimi [Hendrix] made me want to learn guitar,” Misevksi explains from his home practice space, which is adorned with more rock-and-roll ephemera than you can shake a Fender Stratocaster at.

With two of rock’s all-time great virtuosos as his role models, it’s no wonder that Misevski found success on his own path to guitar herodom—his work with Columbus-based group Saving Jane even earned him a gold record.

Thanks to his time in an internationally-touring band and managing a music shop for a spell, Misevski has acquired a guitar or two through the years. While he stops short of calling it a collection, at around 20 guitars, his rec room has more axes per square inch than you’re likely to find in the average recording studio.

(614) spoke with Kris about what he looks for in a guitar, and the search for completeness that forever evades those who pluck six strings.

(614): How did you get started collecting guitars?

KM: I never really considered it collecting. Working in the guitar shop, there was always something cool that came in. I would just kind of cherry pick the used gear. They’re like kids. They all look different, they all sound different. I’ve got nine Fender Stratocasters and every one of them is unique—they’re not nine of the same thing. Some you pick up less, some you pick up more. The ones you pick up less, they just kind of collect dust, or you trade them and get something else.

Which piece holds the most sentimental value?

There’s an ‘89 Strat that I put humbuckers in, that I kind of wanted a Les Paul sound out of with the feel of a Stratocaster. I played it a lot in the 90s and a lot with Saving Jane.

What do you consider to be the “crown jewel” of the collection?

I have a Telecaster that was custom made for me by my friend Craig Phillips, who is a guitar genius. That would probably be the most unique of them, just because there isn’t another one. Amp-wise, I have a 1968 Fender Deluxe, which that particular model—I don’t know if it’s that year or just the one that I have—is just the one amp that I’ll never get rid of. It’s incredible.

What’s the weirdest guitar you own?

There’s one that I got off a guy, it’s a Jimmy Vaughn Stratocaster. It looks like somebody tied it to the back of their car and drove cross- country. It’s just beat to shit, but it plays, and it’s super funky. It really doesn’t sound anything like the other ones. It’s a blues and funk machine.

What do you look for when you’re choosing a guitar?

I like a guitar with a little bit of weight to it—it can’t be too light. I know sometimes people say, especially with Les Pauls, that they’re “backbreakers,” but I don’t mind it so much. And a lot of the Fenders that I have, I would take them to a friend and have him strip the lacquer o the neck, because I like the feel of bare wood. So if I get a Strat with a maple neck, I would just have that lacquer removed.

Has having such a large collection led to any trouble?

Only in the bank account! I bought a Telecaster last week. I went out to lunch with my friend, and we had time to kill, so we hit the music stores and there was this gorgeous blonde Tele. I picked it up and it played great, sounded great, and I’m looking at my friend like, “Am I going to leave with this? I don’t need another guitar!”

Will you ever consider this collection “complete” and stop adding to it?

Whenever somebody asks, “How many guitars do you need?” it’s always the same answer: “Just one more.”

Are you a collector? Would you like to showcase your collection? Email Mike Thomas at [email protected]