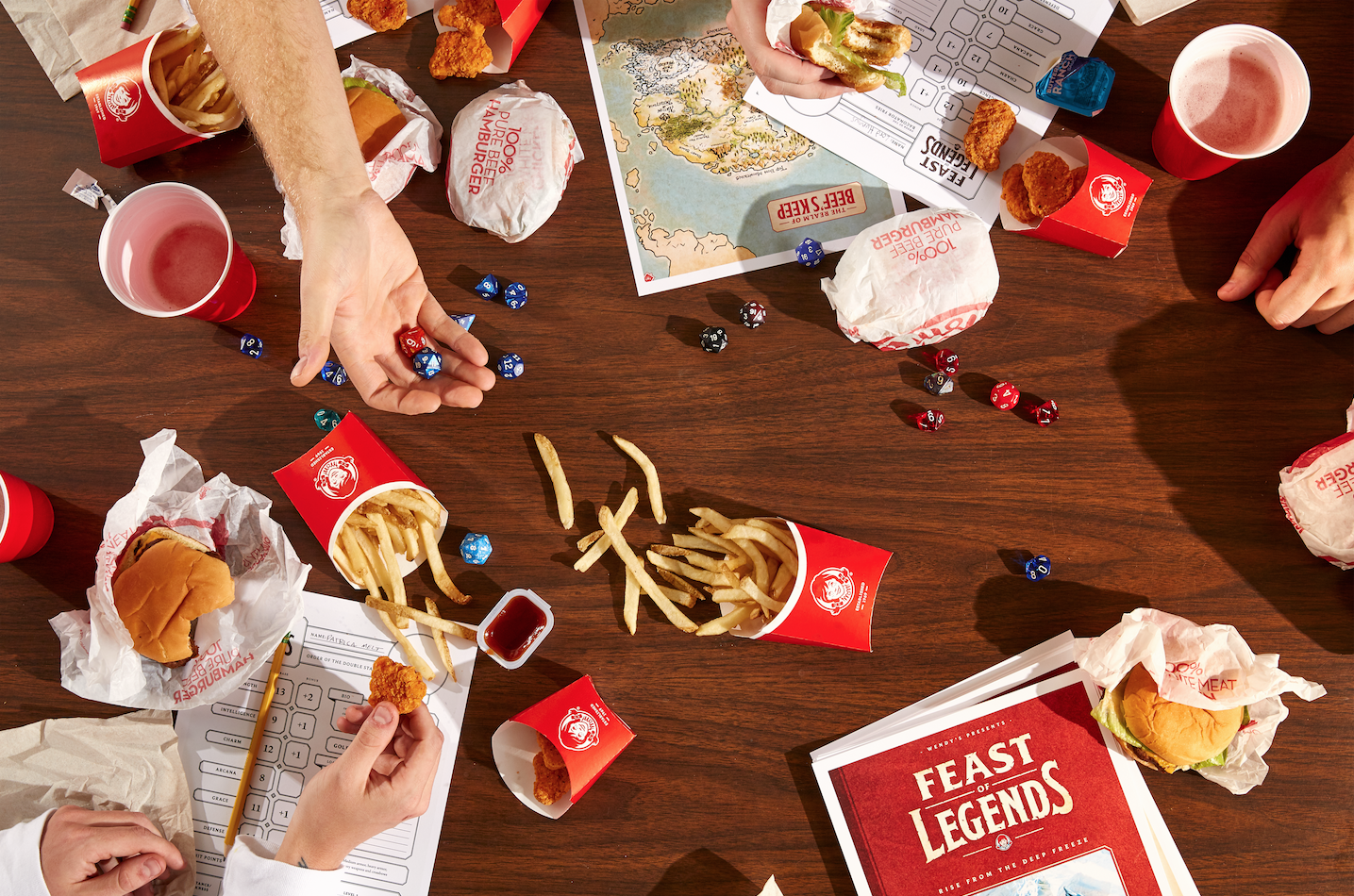 Distracted by the raucous sounds of the festival beyond the garden walls, you almost don’t notice the shrouded figure emerging from behind the old statue. You and your companions turn to leave, but hesitate when the mysterious man calls out to each of you by name. When pressed, the stranger warns of a malevolent force known as “Hunger,” which is gathering its power somewhere deep in the nearby forest. He knows you and your stalwart party of adventurers will do what must be done…

If you’ve spent any time with Dungeons & Dragons or its various progeny, you can probably guess where this is going. A journey into the enchanted forest, traps, treasures, attribute checks and plenty of scribbled notes on pieces of scratch paper. But even if you’re an old hand at the tabletop stuff, odds are your campaign never included golden chicken nuggets and sentient cheeseburgers.

Dublin-based fast food chain Wendy’s has never shied away from the improbable. When nearly all of burgerdom had settled on circular patties, Wendy’s went square. Competitors hocking frozen meat? Wendy’s tackled logistical challenges to serve “fresh, never frozen” burgers. Even in the new frontier of social media, the brand was an early standout in the trend of corporate-tied accounts adopting sassy, comical voices.

The trick with innovation is that it’s hard to stay ahead of the curve. With a Twitter war raging between two Southern-style chicken sandwiches, or Colonel Sanders launching a finger lickin’ good dating app, a witty online presence can only take you so far. In the increasingly polarizing and absurd meta-conversation surrounding fast food online, how’s a brand to stay above the fray? If you’re Wendy’s, you swing for a critical hit by launching a comically overwrought, burger-themed D&D-style table-top game.

At first blush, the rulebook for “Feast of Legends: Rise From the Deep Freeze” seems like nothing more than a marketing campaign disguised as an absurd extended joke. Upon cracking into the 91-page tome, (made available by Wendy’s as a free downloadable PDF) would-be adventurers will discover that this game actually packs some beef.

If that last pun caused you to cringe, this is probably not the game for you. The adventure depicted here takes place in “the realm of Beef’s Keep,” located in the kingdom of Freshtovia. Ruled over by the good queen Wendy, Freshtovia is locked in an eternal struggle against the wickedness of the United Clown Nations and its Jester king (a thinly-veiled allusion to Ronald McDonald).

In spite of never letting the user forget the Wendy’s angle, the Feast of Legends rulebook is every bit as thoughtful and detailed as many traditional, non-burger-based RPGs. Before tackling the main adventure, the reader can peruse around 25 pages explaining everything from gameplay mechanics to character creation and the various “orders”— think classes in D&D—that a player can elect to join. OK, so maybe the weapons sheet includes sporks and spatulas for your warrior from the esteemed “Order of the Chicken Sandwich” to wield—the fact remains that this RPG seems like it might have some real potential for fun (in addition to the fun of mocking its very existence, that is).

Eager to put this theory to the test, an enterprising group of (614) staff set out on a quest to explore the realm of Freshtovia. Our goal? To put the playability of this bizarre game to the test, and to perhaps uncover why, if for any reason, Wendy’s made the damn thing in the first place.

From the beginning, some members of the party were less than enthused at the prospect of playing a tabletop RPG, let alone one with references to Frostys and spicy nugs jammed in at every turn. By the time the group was confronted with its first puzzle—a riddle scrawled on a statue of the late Wendy’s founder Dave Thomas—all trepidation had subsided. Marketing ploy or not, the players were consumed by the game world.

Playing through an early level of mazes, the absurdity of the French Fry Forest or stumbling upon a golden baked potato was all but moot. By the time the party encountered the game’s first boss—a dreaded monster called “Hunger,” the supplied character sheets had all been personalized with care, complete with detailed portraiture of each player’s imagined warrior. The buy-in was complete. We were actually invested in an imaginary land populated by Wendy’s foodstuffs.

Without question, the minds at Wendy’s marketing department had crafted a game that could hook players and keep them hungry for more. The only nagging question that remained was, why? The intricate rulebook and campaign, complete with countless maps and professional illustrations, was surely the work of hundreds of hours of effort. Would anyone really go to such lengths for a joke with no punchline? Is Wendy’s really that desperate to target the tabletop gaming crowd?

One possible answer comes via the rulebook’s explanation of “buffs” and “debuffs,” or powerups and hindrances that will affect characters during gameplay. According to the rules, eating Wendy’s products in real life will yield various advantages to your in-game character (+1 strength for any cheeseburger item) while consuming competitor’s food produces an undesirable effect.

Whether produced to sell burgers-as-powerups to a select group of fast food and RPG-obsessed basement dwellers, or simply existing as one of the biggest viral marketing flexes of all time, Feast of Legends provides a surprisingly immersive and enjoyable play experience. Will it bring gamers to Wendy’s in droves? Probably not. But if our office’s experience with the game is any indication, it might be enough to hook unlikely RPG players on the tabletop experience—one enchanted burger at a time.

To embark on your own adventure, download the Feast of Legends rulebook at FeastOfLegends.com.