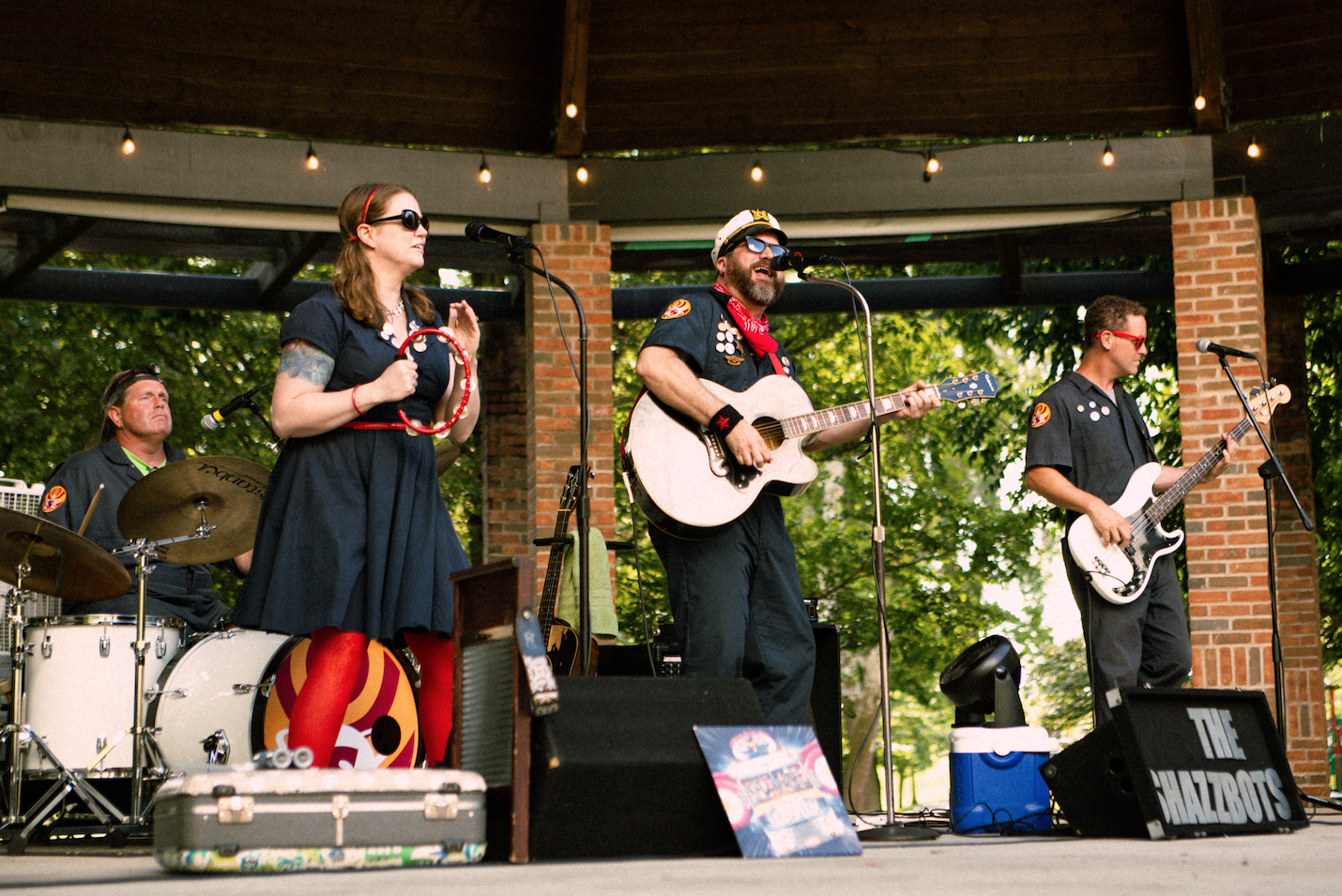 Music for kids tends to get a bad rap for good reason. From the Wiggles to Barney, inane to annoying, somewhere along the way, “kids” and “music” became decoupled, as though children don’t deserve sincere songwriting, and education and entertainment also became mutually exclusive.

That’s why parents are over the moon for the Shazzbots, the credible Columbus kids band that might just save the universe from one more infernal refrain of “Fruit Salad” or a hyperkinetic purple dinosaur professing his static affection.

Founded by Ian Hummel more than a decade ago, the Shazzbots began a live show which eventually evolved into an Emmy-winning television pilot, funded entirely by loyal fans. Their latest album, LIGHTSPEED!, is their long-awaited third release and an apt metaphor for their change in trajectory, marked by a growing international audience.

“When we first started, it was just songs. But I didn’t want it to just be me. I wanted it to be more, something along the lines of Sesame Street, with characters and a backstory behind the songs,” recalled Hummel, whose nautical alter ego Captain Captain travels the galaxy with an acoustic guitar and an archetypical band of misfits in a heavily-modi ed Winnebago. “We weren’t even sure what form the band would take. For a while, there was no drummer, only percussion. For a hot minute, there was even an accordion.”

Hummel recruited friend and bass player Mike “Navigator Scopes” Heslop to help craft the band’s elaborate backstory, with characters whose talents matched those of their real-life counterparts. Josh Tully, better know to kids as Professor Swiss Vanderburton, moved back to electric guitar when Steve Frye, aka Watts Watson, settled in behind the skins. That initial lineup has remained unchanged, but there have been three female members of the crew. Amber Allen as Debora Nebula, Molly Winters as Aurora Borealis, and Diane Hummel as Luna Stardust, who rounds out percussion and also happens to be married to a certain space captain.

“It’s important to have female role models, and you can see from the stage how little girls connect with Luna Stardust,” noted Hummel. “Her costume is still girly, but you can tell she’s a member of the crew. There’s a team dynamic you see in cartoons like Voltron and Thundercats I knew I wanted in the Shazzbots.”

Though the age of their audience has stayed the same, expectations for the entire music industry changed course. Social media was barely a blip when the band began, and streaming services were almost nonexistent. Now they’re essential. But this too is where the Shazzbots shine, a retro band ready for a new frontier.

“After filming the television show and getting it on Amazon, we kind of hit a wall deciding what was next,” he admitted. “So we spent nearly a year creating content for YouTube, something new every week. Kids still listen to songs in the car, but they also watch music videos on their iPads. You have to be available everywhere they are.”

Another giant leap into this new era for the band required rethinking the brand. Matthew Hubbard, one of the filmmakers behind the TV pilot, helped tap into the emerging “kindie” industry, clever slang for independent music catering to kids. Unlike commodity kids bands created to make a quick buck, so-called kindie artists are steeped in the sincere songwriting tradition that predates the digital age. They Might Be Giants and Dan Zanes are more contemporary ambassadors for children’s music with a message, but even Johnny Cash and Woody Guthrie released kids albums every bit as sophisticated as their more famous fare.

“Embracing the kindie label, as well as working through a distributor and with a PR person who understand that audience, has really opened doors,” Hubbard explained. “We’re now available on Sirius XM Kids Place Live and Shazzbots albums are in more than 600 libraries nationwide. There are also all of the major streaming services, Spotify, Amazon, and Apple as well helping to reach a global audience.”

The irony of the Shazzbots now broadcasting songs via satellite hasn’t escaped the band. It’s probably impossible to be more on brand. But that doesn’t diminish the analog roots and inspiration behind LIGHTSPEED!, available on CD, digital, and as an actual vinyl record with an intricately illustrated gatefold cover featuring a cross-section of the ship created by artist Joel Jackson, whom many may recognize as the ominous pirate from the television pilot’s cliffhanger ending.

“These new streaming options and the release of the new album have given us more reach and more information than we’ve ever had before,” Hubbard noted. “We know how many people are watching the TV show, which is really starting to take o in the UK. We can see which songs are doing well in Australia, a market that is also growing due to songs getting play on the in flight kids entertainment service on Quantas airlines. We use these insights to decide which song should be next for a music video, or maybe shouldn’t, at least not right now.”

“Having all of this data can be overwhelming, and you can overthink it. It can reinforce your instincts as a musician, but you also have to be careful not to let it affect you too much as an artist,” Hummel explained. “These are great tools to have, but you can’t let them keep you from pushing boundaries by trying to find a formula for success. Sometimes those simple little songs will surprise you.”

Plenty of musicians have been there before, watching an outtake or alternate track that barely made an album resonate unexpectedly, despite prevailing opinion. It’s also why live shows remain the best market research for the Shazzbots, even now that some of their earliest fans are old enough to be in college. Requests from the audience, often songs that may not have the obvious hallmarks of a hit single, still spark something unexpected. It’s evidence that those obscure deep cuts have sticking power too, feedback a synthetic studio-only kids band just wouldn’t understand.

“I was playing at Big Fun last weekend, and a dad and his two daughters were there. The youngest daughter was wearing one of our t-shirts she’d gotten as a hand-me-down from her sister who is now a teenager,” Hummel revealed. “The older daughter still knew all of the songs. It’s something they shared. She grew out of the shirt, but not the Shazzbots.”

For more on the Shazzbots, LIGHTSPEED!, and upcoming live shows, visit theshazzbots.com.