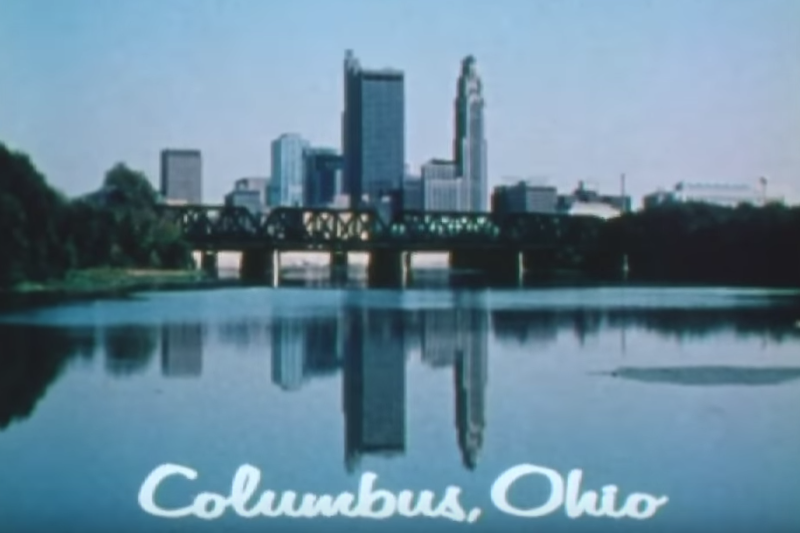 You’ve come a long way, Columbus. While progress in our city may not come fast enough for some, it only takes one look at this treasure trove of sometimes-embarrassing, totally radical videos from the Youtube to shed light on just how much we’ve grown as a city.

For many of us, it’s hard to imagine Columbus without AEP. As it turns out, the company’s roots in the city can be traced only as far back as 1980. That’s also the year this absolutely cornball promo video was produced by the company to entice, or perhaps reassure, their employees at the prospect of living in Columbus.

If you can make it through AEP CEO Pete White’s droning introduction, this video provides a virtual time capsule of nearly every aspect of the city in the 80’s. Spoiler alert: Buckeyes football was a big deal even back then!

If views of the Columbus skyline in that last video didn’t look foreign enough, how about watching a Columbus landmark being plopped down in an alien frontier by a big metal bug?

This short film from then-CCAD student Mark Sullivant shows some cool traditional effects that are pretty remarkable, even by today’s standards. As the video’s description explains, Sullivant went on to a successful career as a top matte painter and special effects artist in Hollywood, working on franchises such as Star Wars, The Ghostbusters, and Indiana Jones. Not bad!

This video offers a rare look inside the Newport from back in the day, and could definitely spark inspiration if you’re in the market for a bold new hairstyle.

Though we may not have the machinery of major labels and studios in place just yet, Columbus is well on its way to becoming a full-fledged music city. With our thriving local scene and consistent appearances from some of the nation’s top touring acts, you’d never guess there was a time when a visit from a group like Cocteau Twins could cause a near-hysteria.

Painfully 90’s footage from The Arnold

While the looks of Ohio Stadium and the convention center in this video might still be recognizable today, there’s nothing that matches the production values in this promo video from The 1993 Arnold Classic—just the fifth edition of Columbus’ signature event.

Remember the WTTE Kids Club? I can still remember rushing home from elementary school to find one of their magazines chocked full of Power Rangers and X-Men-related content in my parents’ mailbox—perhaps my first tangible publishing-related memory!

While this video sends you on a trip down memory lane, there’s no need to dwell in the past when it comes to former kids club host Yolanda Harris. Harris has had a thriving career in local media, and is still hitting the airwaves in 2019 as an anchor at WBNS.

This video of an old BMX competition speaks to a more radical time for our city. Will Columbus ever get this gnarly again? Only time will tell. Until then, kowabunga, my dudes!

Have a unique memory of Columbus you’d like to see featured for Throwback Thursday? We want to hear from you! Please leave a message in the comments.