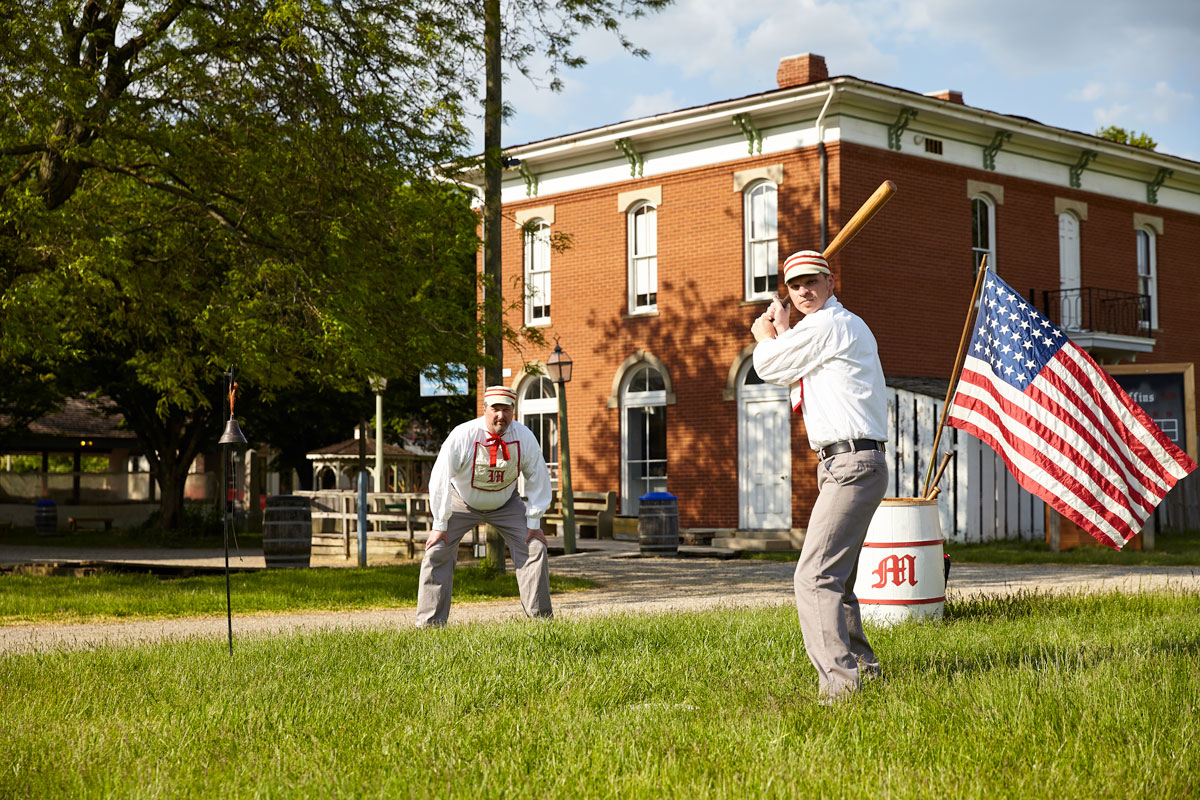 When Aaron Seddon first stepped up to the plate nearly a decade ago for the Ohio Village Muffins, he was actually stepping back in time. It wasn’t the same game he’d played in his youth. The rules and uniforms were unfamiliar, and pushing 30 as a walk-on wasn’t out of the ordinary. Even the spelling was different. This was 1860 vintage “base ball.”

No that’s not a typo—and no, the whole team didn’t forget their gloves either.

“When we’re talking to spectators about the differences in the game, they’re immediately concerned that we aren’t wearing gloves. That kind of protective gear didn’t enter the game until the 1870s,” explained Seddon. “We get a lot of our recruits from people who come to matches, who are intrigued by what we’re doing. We’re a close-knit group, even o the field. We’re a team, but we’re also a family.”

Long before the days of hot dogs and dugouts, what we now know as baseball was played in fields and empty lots from Cooperstown to Hoboken. Historians still dispute the exact origin story of the sport, but generally agree that it was the inevitable intermingling of Union and Confederate troops that transformed the game into a national pastime.

But Columbus has its own history, mixed with a little folklore. Before the war, there were exactly zero baseball teams in the capital city, but shortly after its end, there were six. Players learned the sport from fellow soldiers from New York and New Jersey who brought bats and balls with them to pass the time between battles. Even the hand signals still used today for balls, strikes, “safe” and “out” arguably owe credit to the Ohio School for the Deaf in Clintonville, put into play a decade later to help their hearing-impaired athletes compete as equals.

Which brings us back to the matter of the Muffins. When the Ohio History Connection started their vintage baseball program in 1981, there was no prototype, only a rulebook. Recruiting most of that first team from their employees, they couldn’t help having some self-deprecating fun at their future expense. In the early days of baseball, your best players were referred to as the “first nine” followed by the “second nine.” Everyone left on the bench were called the “muffins.” A “mu ” was period vernacular for an error, back before they were counted. The name was so inside baseball, it was perfect.

“The umpire’s role isn’t really to arbitrate the game. He’s there to settle disputes between the players they can’t adjudicate themselves,” Seddon noted. “And the pitcher’s role is to facilitate hitting. In modern baseball, your pitcher is your best defensive player, to prevent the ball from getting into play. The game we play is before it became professional. Everyone was an amateur back then.”

Fans will also notice a suspicious absence of balls and strikes. Newspapers from the era report some batters taking 50 or more pitches waiting for just the right one, because if a hit was caught on the first bounce, it still counted as an out.

“Probably the biggest difference between modern baseball and the game we play is—if an opponent makes a really good play—everyone cheers,” Seddon revealed. “We’re playing a competitive game, we’re obviously both out there to win the match. But there’s much more camaraderie between the teams.”

Speaking of the other team, the Ohio History Connection has more than one vintage baseball club. Much as the rise of men’s baseball inspired impromptu games among women well before Vassar College started the first formal women’s program in 1866, the Diamonds played their first match in 1994. Despite their parallel history and popularity, many of the early women’s vintage baseball teams have since consolidated or faded away, making matches more challenging.

Like the Muffins, the Diamonds also represent the game as it was played in 1860, which for women of the era was strictly recreational. The rules were the same, but even playing in back fields among themselves, the ladies often caused quite a social stir with their attire.

“We wear period-accurate dresses made from patterns of actual garments considered either a camp dress or a work dress. Someone who first starts out may play in a long skirt and a white blouse,” explained Jackie Forquer, who has played for the Diamonds for more than two decades. “We don’t play as many games as the men, but the time commitment is also less. We play festivals and exhibitions games. Our players who come from a softball background see this as another way to share their love of the game.”

Both the Muffins and Diamonds are technically historical “interpreters” who interact with spectators much as players would have in 1860, sometimes to exacting detail. Forquer, who plays first base, is sometimes the first ambassador for vintage baseball folks may meet, either through school programs or at the beginning of a game, with Diamonds matches often preceding the Muffins. Never breaking character, she’ll politely ask the umpire to seek the approval of the audience before women roll up or remove their sleeves before beginning play. Showing so much skin used to be scandalous.

Every organization has a historian, but vintage baseball happens to have an actual one. Dr. Jim Tootle came to the original version of the game later in life than most, but has still managed to outlast many of his peers. Having retired as assistant dean of the College of the Arts and Sciences at Ohio State, his passion for preservation is as infectious as his laugh.

“I’ve gotten to play in four major league parks from coast to coast. I thought my playing days were winding down when I stumbled upon this, and I’ve probably played 600 to 700 vintage games,” Tootle recalled. “It’s been a wonderful experience to represent the Ohio History Connection on our home field at The Ohio Village, but also to travel the state and the country.”

Tootle actually has written the book on vintage baseball—two in fact, not counting a third still used by prospective vintage baseball teams across the country trying to get their start.

“It’s like Civil War reenacting in a way because we give great attention to accuracy—interpreting the rules, our uniforms, and our equipment. And yet, the moment the first pitch is thrown, it’s not a reenactment anymore. It’s a real game, and we don’t know who is going to win,” Tootle chided. “I have to laugh watching ESPN anytime there’s a barehanded catch. They go nuts and show it three or four times. I feel like saying, ‘Come out to a vintage baseball game, every catch is a barehanded catch. Gloves weren’t even invented yet.’

For a complete schedule of games, including the 2019 Ohio Cup Vintage Base Ball Festival featuring 30 teams from across the country, visit ohiohistory.org