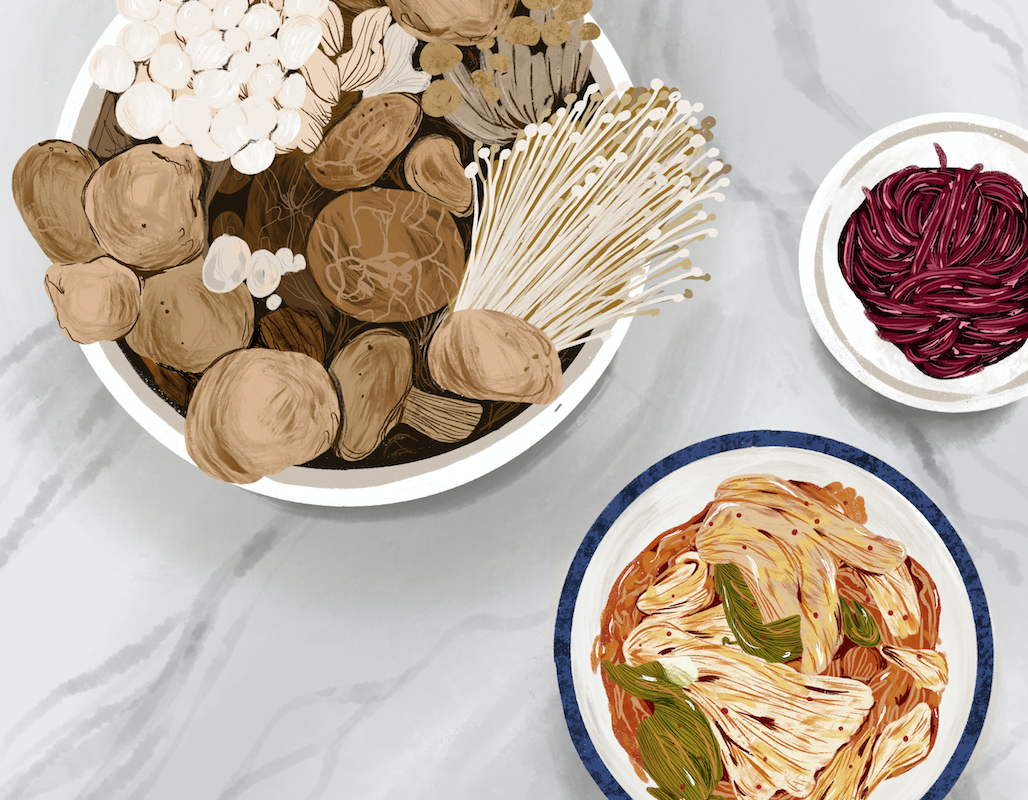 Food trends aren’t difficult to spot these days. Simply observing recipes pinned on Pinterest and tallying a few search terms often yields a good idea of what’s making it to our tables, or at least what we think we should be eating. If this data holds, then “You are what you eat,” is a phrase more people are taking seriously. From novel flavors to health benefits to sustainability, the reasons behind our eating patterns seem to be increasingly driven by a more mindful approach to eating.

Few of today’s trending foods are new. What is new is an awareness of their benefits. Recently I sat down for lunch with Portia Yiamouyiannis, owner of Portia’s Café, a vegan restaurant with the mission of creating positive change through food, to discuss about how some of these trends are hitting the Columbus food scene.

Between seeking unique flavors and food that is more naturally processed, foodies are finding the answer in fermented foods. Fermentation preserves food naturally through lactic acid, which is produced by natural bacteria added to food, which then feeds on its sugars.

Asian and African foods have long incorporated fermentation techniques from miso soup to kombucha tea to a lassi yogurt drink. The signature flavor that fermented foods have can lie between sour and savory, with a bit of a tangy bite.

Fermentation can extend the freshness or shelf life of a food or beverage, but it also add certain health properties as well, including omega-3 fatty acids and probiotics, which promote gut health.

“Usually why people get into fermented foods is because of the good bacteria it gives them,” said Yiamouyiannis, who points to her stock of kombucha teas, an especially popular item. “If you look from ten years ago to now, [the popularity] just grew exponentially. And people start[ed] making their own kombucha. So that’s another cool thing.”

So the fact that fermented foods have become popular is a no-brainer for Yiamouyiannis. Foods that are both healthy and appetizing are filling a gap between bland and beneficial, or flavorful but unhealthy.

“They hear [kombucha] is healthy for you and it tastes good, and they have a choice between water and kombucha, or pop and kombucha, they’re going to go for the kombucha.”

Technically classified as fungi, mighty mushrooms are becoming increasingly popular in a more plant-forward food world. Hybrid burgers made of both ground beef and ground mushroom hit mass distribution with the SONIC signature Slinger, giving a nod to consumers who want to reduce the amount of saturated fat and calories of a traditional burger, without sacrificing much taste. And taste seems to be driving the mushroom trend.

While the pungent flavor and aroma of fermented food might take some getting used to, mushrooms have a springy texture and an earthy, umami flavor that are appealing to an array of eaters.

For those who desire, mushrooms can be an easy and satisfying substitute for meat.

“This [trend] is taste, and then it’s health. But the health is freaking off the charts for mushrooms. … They can be anti-carcinogenic, anti-tumor, pro-immune system, and good for the liver,” explained Yiamouyiannis.

Those properties are due to the antioxidants, selenium, and vitamin D found in mushrooms. Now that mushrooms are becoming better known for nutrition, other types of mushroom offerings are becoming more common. Portia’s offers a 14-mushroom blend, used to add a unique flavor and an extra dash of health.

“I have it in different coffee drinks,” said Yiamouyiannis. “You can put it in miso soup. It does make it taste richer, but it you know you’re also getting all those healthy properties.”

While oat milk has been around for a while, it was the Swedish brand Oatly that put oat milk in the spotlight, ahead of other plant-based milks. Suddenly, grocery stores were hard-pressed to keep the product in stock.

Oat milk has a more desirable texture than most plant-based milks, making it a more palatable swap for dairy products in coffees and teas.

Oat milk has an additional benefit of being relatively allergy-friendly. And since oats require less water than a product such as almonds, and can be grown domestically (unlike coconuts) oat milk is also a more sustainable product.

Despite its sustainability, oat milk is still a pricey drink choice. But Yiamouyiannis believes that will change. “Until [a certain number of] people jump on the bandwagon of getting oat milk it’s going to be expensive for a while, but it’ll get cheaper as we go.”