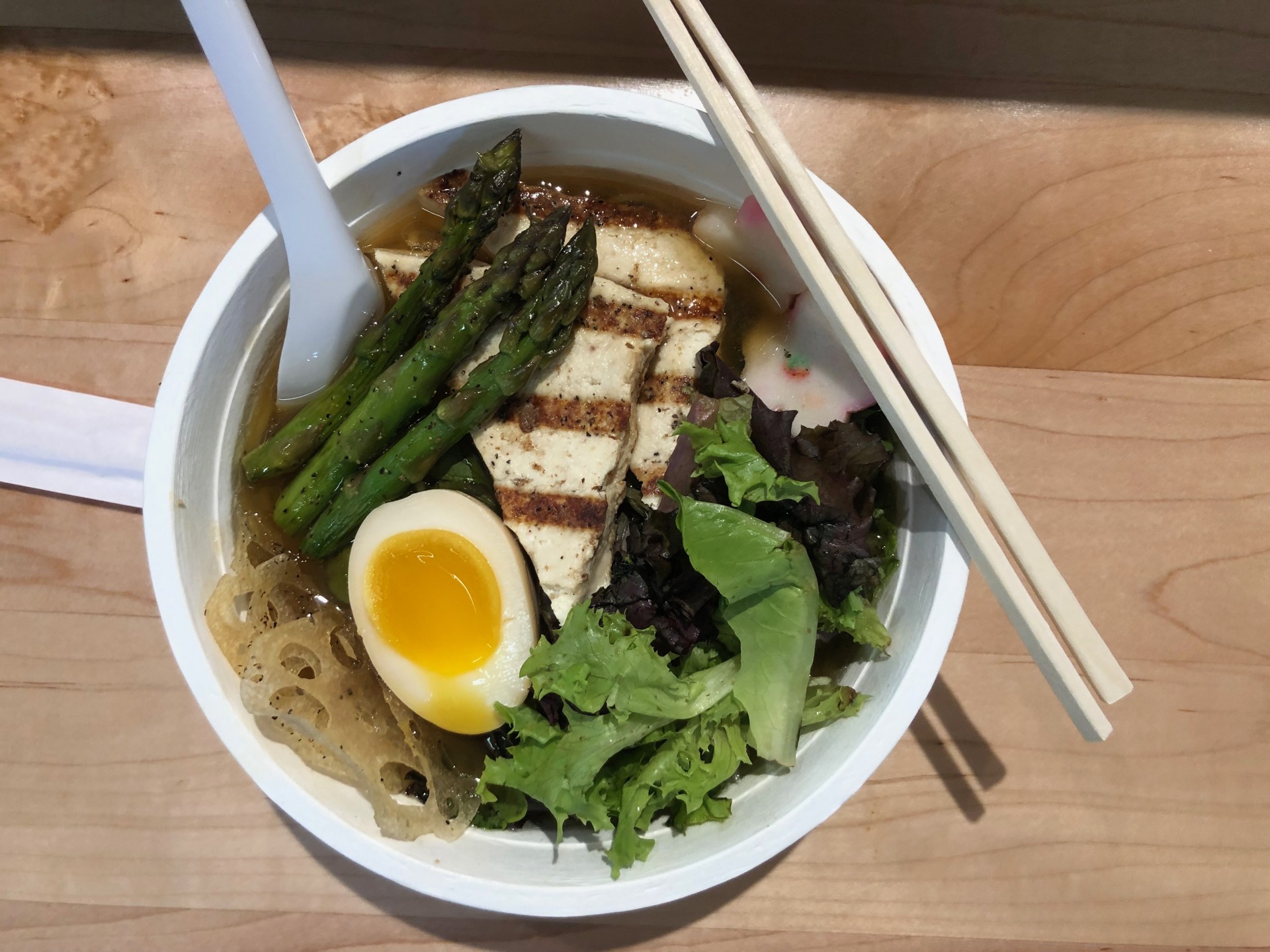 I won’t lie, most of my experience with ramen comes from the packs you can snag at the store for less than a dollar. Typically, I just pop it in the microwave for a few minutes, toss in the seasoning, slurp down my meal, and try to repress the memories of shoving this in my face every day during college. So when I had the chance to try Satori Ramen Bar, a new merchant at the North Market which opened roughly a few months back, all I was expecting was some noodles and broth.

Boy, was I wrong.

When I arrived, people were already huddled around the counter; some with chopsticks full of noodles, pork, and other fixings while others sipped away the last of their broth. I told the cashier that I was vegetarian and the GM, Alice, quickly suggested I try the veggie shoyu. The broth, as Alice explained, is a clear fermented vegetable stock giving it that highly-coveted umami flavor. It comes served with grilled and season tofu, a marinated soft-boiled egg, dried wheat gluten, malted rice paste, garlic, asparagus, and lotus root chips. As my bowl was served to me, Jason, one of the cooks at Satori, suggested I add chili oil and buttered corn to which I quickly responded: “Hell yes.”

Next is the noodles. You know how when you make packaged ramen, the noodles essentially become mush? That’s far from the case here. These noodles had consistency and texture. They soaked up the broth, but also maintained that chewiness. Another added bonus is just the actual experience of eating heaping bites of noodles with chopsticks. I felt like I was an anime character who hadn’t ate in days as I slurped the long and stringy noodles. Don’t worry about the weird looks from passers-by, they shouldn’t knock it ’til they try it.

Finally is the fixings, and they are the true unsung hero of this bowl. The asparagus was perfectly cooked—a little soft, but with a crunch for a change in texture. The soft-boiled egg broke so that the yolk could blend in with the broth. Typically, I steer clear of tofu, but here the tofu served more as a chance to host broth, making it melt in your mouth with each bite.

But, without question, my favorite aspect was something I’d never had before: the lotus root chips. Jason explained they take the lotus flower to a mandolin to get the chips extra thin and then they fry them to add a crispy exterior. Each time one snuck into my next bite, I was blown away with how much flavor something so small could add. They were salty and crunchy; almost like a potato chip. If you can, ask for extra lotus root chips in your bowl.

So, in short, I loved every bite I had at Satori. If we are rating this on a scale of 1-10, 10 every day of the week and twice on Sunday.