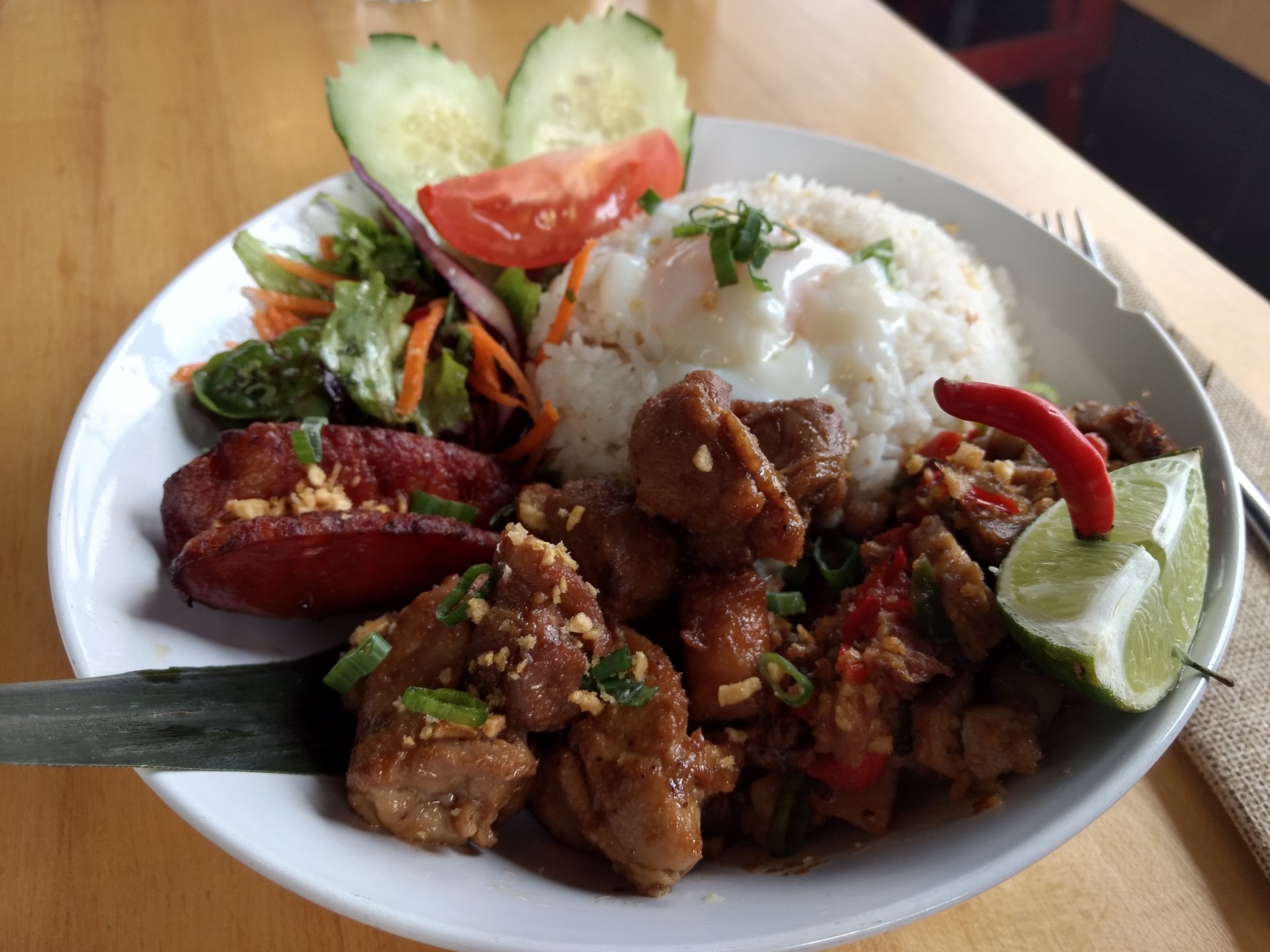 Welcome to our ongoing feature highlighting the best international cuisine in Columbus. Consider this your challenge to try something new!

After centuries of Spanish rule followed by decades of insular governance under US authority, the cuisine of the Philippines is like a living record of the nation’s complicated history. The colonial past of the archipelagic South Pacific nation has resulted in a unique cultural synthesis, combining aspects of Asian tradition and western influence.

Colonialism is a word that carries many negative connotations. Likewise, no one word in the culinary sphere may be regarded with more disdain than “fusion.” Nevertheless, the remarkable Filipino cuisine at Grandview’s Bonifacio shows that a collision of cultures can, it certain cases, yield very great things.

When I visited Bonifacio on a mid-week afternoon, I was treated to a trio sampling from the bar’s stock of fresh-squeezed juice, including familiar topical favorites like mango and guava. The star of show was the juice of the calamansi, featuring a hybrid citrus fruit that is a ubiquitous in Filipino cuisine (think lemon/lime flavor, but with the tartness dialed way down).

The first course served was Tinola, which is a Filipino chicken soup prepared with ginger, garlic, onion, green papaya, and spinach. The rich broth was deep with flavor, and came with two succulent pieces of bone-in chicken thigh hiding beneath spinach leaves. The chicken was somewhat unwieldy in this pool of broth, but for a soup this satisfying, there are worse problems to have.

As a special main course, I was served a mixed sampling of all of the protein choices available in the restaurant’s primary lunch offering, the Bonibowl. Whichever protein you choose, the accompanying side is a sous-vide egg atop a heap of garlic rice. Once you’ve had rice this way, it’s hard to go back to anything else.

Meat-wise, the Spanish influence on Filipino cuisine shines through in Bonifacio’s Longanisa sausage, which is more reminiscent of a teriyaki preparations in flavor than its latin cousin.

For the more adventurous, there’s the Sisig: tender chunks of pork shoulder sautéed with garlic, onion, ginger, and bell pepper, finished with lime juice and chili pepper. This spicy creation is traditionally prepared using meat from the face of the pig, but this Americanized version still packs plenty of flavor.

For first time visitors to Bonificio, or those new to Filipino cooking in general, the adobo is requisite eating. Another word borrowed from the Spanish, adobo refers to a preparation of meat (usually chicken) marinated and simmered in a mixture vinegar, soy sauce, garlic, and black peppercorns. Bonifacio’s adobo chicken is tender and juicy. Remarkably, the adobo process manages to create some novel flavors (to the western palate) for America’s go-to protein.

With a full bar, including South-Pacific-inspired craft cocktails and draft beer from Ohio mainstays like Rhinegeist and Brewdog, Bonifacio is just as well suited to a night out as a fast and tasty lunch. Be sure to save room for dessert, whether its in the form of ube ice cream sandwich or leechee flan (talk about east meets west). For the total dessert package try, Halo Halo, a creamy mix of shaved ice topped with with a medley of preserves, ube ice cream, and leche flan.

This might just be the most perfect photo of halo halo ever taken. 📷: @voguetravelogue

For anyone who thinks fusion is just another played-out trend in cooking, the OG culinary mashup found in Filipino food may make you reconsider. The fare at Bonifacio combines familiar aspects of Asian, Spanish, and American cooking traditions to create flavors that are truly original.

Is there an international restaurant you’d like to see us cover? Let us know in the comments!