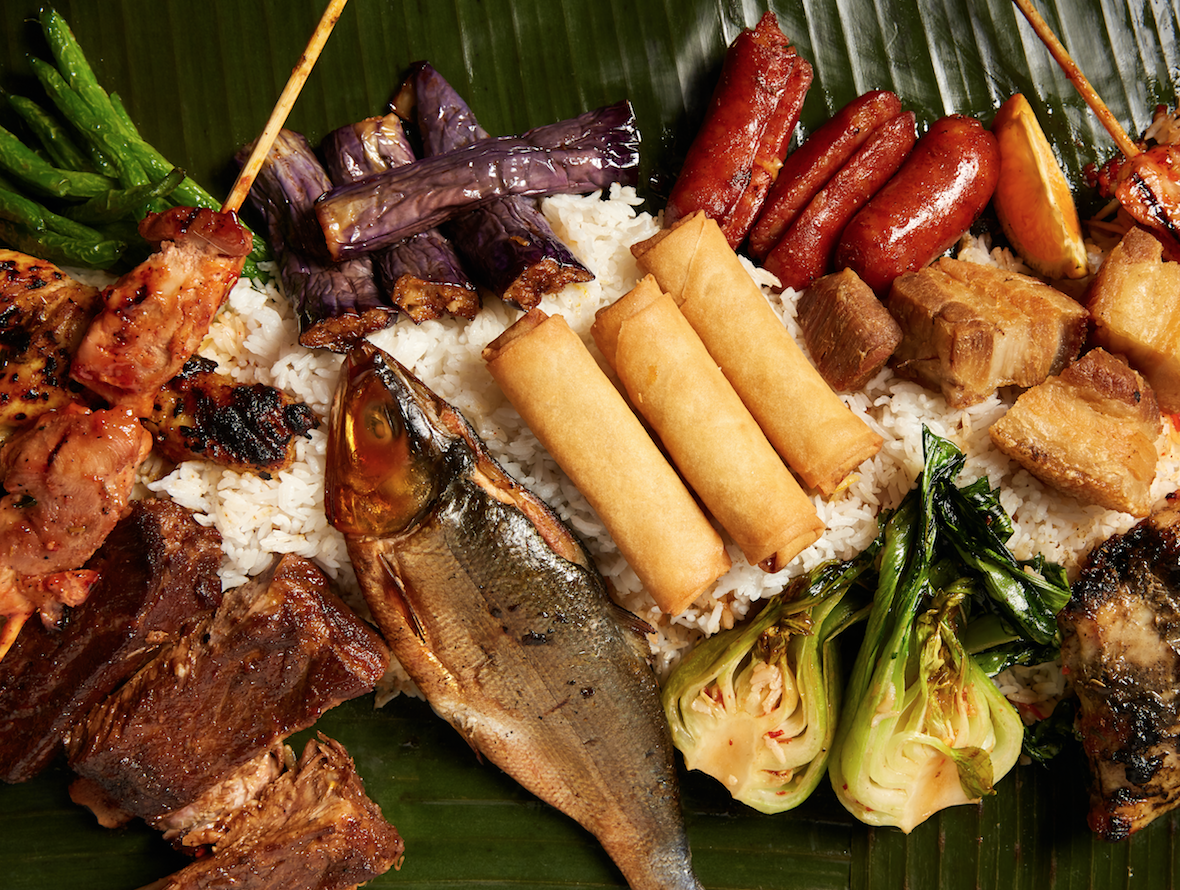 Remember when your mother told you not to eat with your hands? During Kamayan, a traditional dinner held on the last Monday of every month at modern Filipino restaurant Bonifacio, you can disregard that rule. The word kamayan literally means “with hands” in Filipino, and guests are invited to dig in. Before the grand opening of Bonifacio, the restaurant held its first Kamayan for the staff’s close relatives and friends, curating a dining experience filled with food and the spirit of community.

“Kamayan has always held a special place in my heart. Before I could hold a spoon and fork, my mom fed me by hand. Even after I could hold a spoon and fork, this was still my preferred way to eat fish and rice,” said Bonifacio owner, Krizzia Yanga. She admits that some foods taste better when forgoing utensils. “I like to think of the Kamayan table as an altar to community.”

Attending each Kamayan with her mother, Yanga ensures that each dinner lives up to its word-of-mouth expectations. She shares stories about her visits to the Philippines, gives guests practical tips on how they can eat with their hands, and curates an easing playlist.

Bonifacio also hosts Boodle Nights (a play on “boodle fights”, a Filipino military-style of eating) every Thursday and Sunday night as another communal event, one that’s built connections across the table. “At our very first Boodle Night, before it was a weekly staple, a family walked in, shared a table with strangers, and left saying, ‘I think we just met the people we would trust with our kids if anything ever happens to us,’” Yanga said. “While this was the most unique expression of it, over and over, we have seen people come to the table as strangers, and leave as friends.”

While both are regularly held at Bonifacio, there are still noteworthy differences between Boodle Nights and Kamayan. A ticketed event, the menu for Kamayan is usually pre-set and thematic, (past events have been gluten-free, seafood, and regional cuisine) to engage the staff with guests. On the flipside, Boodle Nights are suited for guests who are interested in Kamayan, but need more flexibility in attending. Boodle Nights also have dedicated servers, rather than being communal. With an a la carte menu, Boodle Nights have a customizable spread, giving way to a more casual dining experience that is friendly to those with dietary restrictions.

Kamayan attendees can expect to feast on Inihaw na Liempo, a grilled marinated pork belly dish, and Inasal na Manok, grilled chicken marinated in annatto, lemongrass, garlic, and lemon. Debuted at a regional cuisine Kamayan, Yanga credits Pyanggang Manok—a chicken dish braised in tumeric, lemongrass, onion and more specialty seasonings—as a dinner standout. “My mom comes from a small island in the southern Philippines, much closer geographically and culturally to Malaysia than Manila. Because of this, the food in that region is much different than mainstream Filipino food and is a rare find even in the Philippines. After [adding Pyanggang Manok] to our regular menu, it quickly became one of our most popular dishes,” Yanga said.

An unexpected part of Kamayan may be the focus of connection, but it’s also a welcome change from ordinary dining experiences. For those hesitant to eat with their hands, the tradition may encourage guests to put down their phones and relax in the Kamayan atmosphere. Once guests begin to eat, there’s a commitment to finishing the courses and being attentive to others. Yanga is also interested in and changing thoughts on societal norms, especially conversations involving Filipino cuisine.

“Columbus is a diverse city, but if you’re not careful, you can live your entire life here without meeting anyone different from you. From food trucks and mom-and-pop shops to fine dining, the influence of Columbus immigrants can be felt everywhere, in subtle and obvious ways. But you might have to step out of your comfort zone to get to know your neighbors and try their food,” Yanga says. “There are plenty of big names in Columbus who are genuinely pushing for international cuisine. The folks behind North Market are a prime example of people using their influence to highlight international cuisine and immigrant communities. And of course, we are excited for the opportunity to represent Filipino cuisine at Budd Dairy Food Hall.”

Rather than being misrepresented, Yanga finds that Filipino food can often be underrepresented, creating a barrier in which Americans can have a misconception of Filipino cuisine as being monolithic. While Filipino visibility in mainstream culture deserves an increase in representation, American palates can be shifted when informed about Filipino food, art and experiences. Kamayan is just a start, but it’s a promising one.

“I hope that, if nothing else, Bonifacio shows folks that there are people behind the cuisine with incredible stories to tell. It can be easy to get caught up in the hype when a new cuisine has become mainstream, but there are people who have been eating and making this food for generations and food is just one part of their story,” Yanga said. “Find experiences and spaces that are inclusive, but not explicitly created for you, and learn to be a guest at someone else’s house. Walk into those experiences with curiosity and humility, with an open heart and mind.

Bonifacio is located at 1577 King Ave.