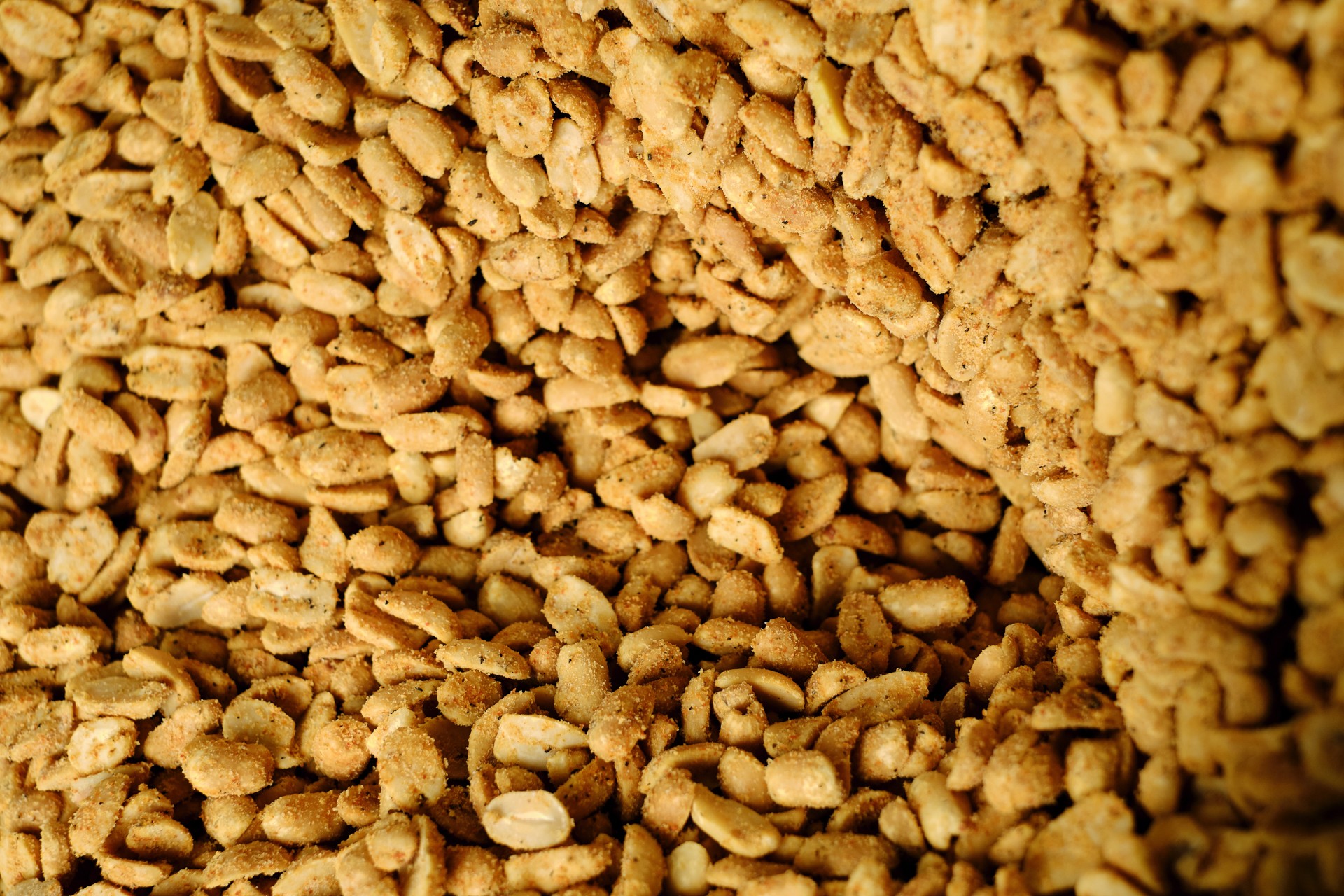 I remember the smell of Wonder Bread being voted one of the best aromas in Columbus in some sort of poll. Obviously, these responders had never been to the Krema Nut Company. When I enter the Krema retail space and headquarters on West Goodale in Grandview Heights, the irresistible aroma of roasted nuts and popcorn hits me like a circus and movie theater rolled into one. I know I’m not going to leave here without something in my hand.

The Krema Nut Company was founded in 1898 by Benton Black. The building was located at Second and High Streets, and primarily ground spices. However, Black also discovered the practicality and marketability of grinding peanuts into a paste, creating a protein supplement for people who were unable to chew other types of food. (Adequate dentistry was still in development.) The company moved to its present location in the mid 1920s, and while it started roasting the peanut butter, the product is still decidedly “old-school.”

“We do it all natural, so there’s no sugar, no salt, no hydrogenated oils. We use the number one fancy-grade Spanish peanut, dry roast it, take the skin off, take the heart out [the bitter part of the nut] and grind it. So
it’s real simple,” explains Brian Giunta, Krema’s Senior Vice President.

Giunta’s family bought Krema Nut in 1991, when he was a teenager. He knew he enjoyed business, but didn’t know where to channel that interest, and began discussing his plans with with his parents and others. “That was right when the internet was starting to really kind of pop.”

Guinta recalls his father being interviewed by Business First about the company’s website, one of the first in Columbus. “There’s a picture of my dad holding a big scoop of nuts out front talking about the internet, if it was going to take off.”

Inspired, Giunta joined the Krema team after college, and has played a role in preserving its traditions, but also carrying the company forward as his parents work towards full retirement.

“I came on in 2000, and so I started from the bottom and worked my way up. Every single job in this place, I’ve done,” Giunta says. “[Taking over the company] is awesome, but it’s a lot of weight on the shoulders.”

As he moves around the space, it doesn’t seem there isn’t a job that Giunta can’t or won’t do, from taking calls to running equipment to helping behind the register. Today’s task is to make Hot and Spicy Peanut Butter, a natural peanut butter with a bit of cayenne pepper, a perfect addition to a cheese and cracker platter. (Giunta especially enjoys this treat with saltines.)

Giunta takes me back into Krema’s production area, occupied by old but well-built machinery, and the simplicity of the process becomes clear.

“Our grinder is very small. It’s low output. We do small batches. We make peanut butter every week. It would probably make much more sense to do a month’s worth, put it on a skid and put it in a warehouse and let it be. But that’s not us. We want it to always be fresh. Same thing with the oil roasting. We do it every week. So again, it would make more sense to just roast for a couple days and fill up all of our inventory. But that’s not us. So it’s like Groundhog Day every week.”

And there’s no fooling around. After master roaster Doug Vorhies loads the spicy peanuts (yes, just peanuts) into the grinder, he sits down to collect the thick, smooth butter in pre-labeled glass jars and hands it
off to to be immediately (yes, immediately) sealed, locking in the freshness as promised.

“I can burn 300 pounds in a matter of seconds if I don’t pay attention to what I’m doing,” said Vorhies, who has been roasting and grinding peanuts at Krema for a decade. “When I get the peanuts in, I look at the lot number and see if that’s changed. Or you feel the weight of the bag and sometimes they’re a little bit looser because the moisture has evaporated out so the nut would tend to shrink down.”

Although visitors aren’t allowed in the production area, much of the process is still visible through the retail store windows. Krema’s retail space is split between its store, which carries its nut, popcorn, and candy products, and its cafe, which offers a dozen gourmet nut butter sandwiches. The Krema Special, an upgraded PB and J, is a top favorite. The Classic Old Timer, a sandwich of crunchy peanut butter, strawberry preserves, and sliced strawberries, is a close second. Ice cream and milkshakes are available, care of Johnson’s Old-Fashioned Ice Cream in Bexley.

“We have a nice relationship with them where they’ll use our peanut butter […] and we’ll use their ice cream for our milkshakes and sundaes,” said Giunta. “They do a great job over there.”

I give into the sensory overload and my undeniable hunger and try a Peanut Butter Apple Cheesecake sandwich, an absolute tribute to the comfort childhood with a grown-up taste. There’s hardly a way to not get sticky eating this treat, but I don’t really mind. Peanut butter always seems to hit the spot.

As I’m leaving, Giunta notices a stray nut on the floor. It would be easy to leave it and let it be swept up later during a dedicated cleaning time. But instead, Giunta picks it up and discards it, lest it be crushed underfoot. It seems to be exemplary of his sense of pride and drive for quality and customer satisfaction that’s summed up in a simple mantra.

“I just want everything to be perfect.”

The Krema Nut Company is located at 1000 W Goodale Ave.
For product information and to order online, visit krema.com.