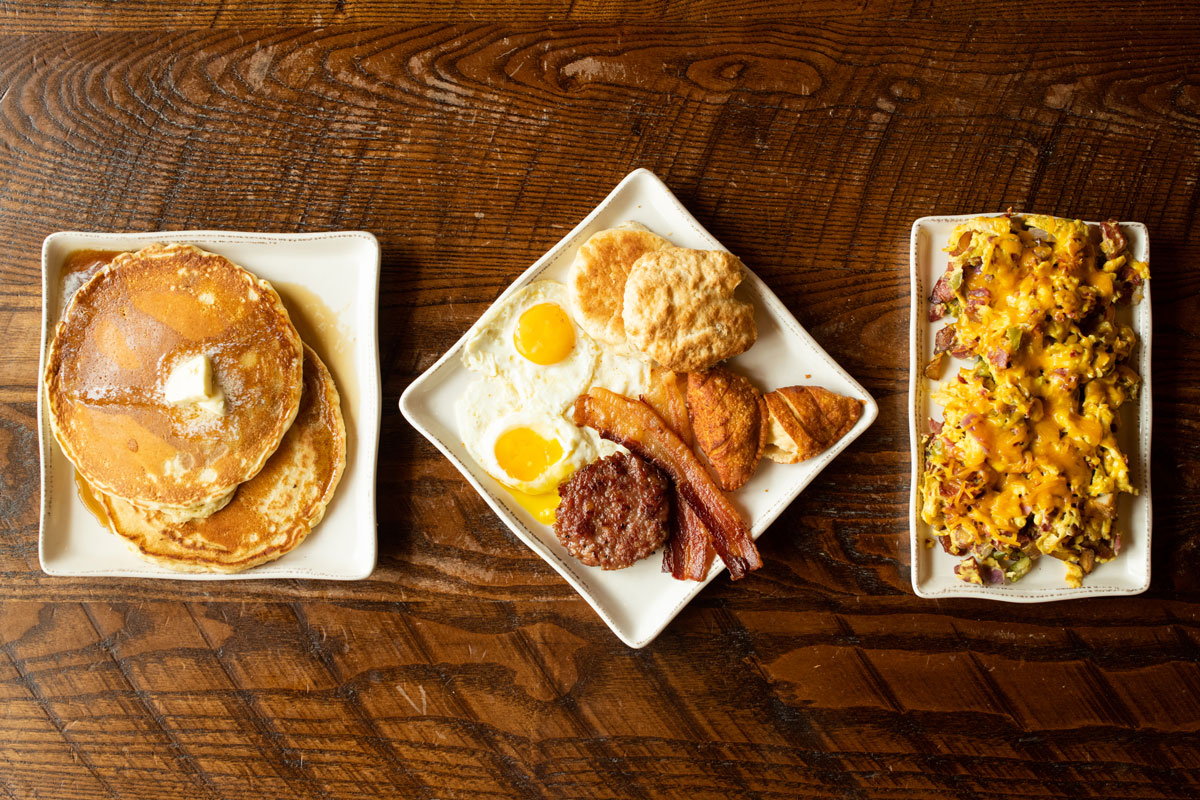 Have you ever ordered a steak that was so spectacular, you wished you could ask the chef to carve off a couple more and wrap them up for the road?

That probably wasn’t what Joe and Jane Blystone had in mind when their fourth-generation farm started processing their own meat on-site more than a decade ago. But that’s kind of how it worked out. Their butcher shop and bakery soon led to a taproom, which inspired a bona fide farm-to- table restaurant. With a crafted collection of better beers and an enviable selection of elevated fare, Blystone Farm in Canal Winchester has evolved from a destination into a gathering place that lures more than just the locals.

Despite the burgeoning business, Blystone is still small where it matters most, treating guests and staff more like family, and attracting top talent like Tyler Toles as executive chef.

“We’re not very big on titles around here. Joe is just good at putting the right people in the right position,” admitted Toles, whose experience in better-known kitchens in Columbus didn’t dissuade him from stepping outside his culinary school comfort zone to run a four-star farm stand. “We talked as we walked around the farm, and I admired what Joe was trying to do at Blystone. So he invited me to become part of the family.”

What once was a commercial sheep farm has become a passion project. Joe’s hands-on approach to operations combined with Jane’s coffee shop and bakery background also made the couple perfect business partners.

“He’s so much more than a boss. Joe is everyone’s dad, but he still feeds the cows everyday,” Toles chided. “Jane is a pastry chef and beer connoisseur, but if we’re short-staffed, she’s out in front waiting on customers. It’s just part of the culture here at Blystone.”

Lunch and dinner daily with breakfast on the weekend sounds pretty typical, until you take your first bite. Even something as simple as a sandwich seems entirely original when it’s hand-pressed Wagyu beef smothered in fried onions and gooey Gouda—or a house blend patty topped with four strips of bacon, two slices of cheddar, and a fried egg, rightly called “The Whole Dang Farm.”

“A lot of people love our pasta, especially our mac and cheese. We start with semolina and durum our and eggs; every shell is hand cut. The sauce is heavy cream and shredded cheddar,” he noted. “I’m from a fine dining background, so coming to Blystone was a bit of a culture shock— somewhere people appreciate real mac and cheese more than I’ve ever had guests appreciate foie gras or beluga caviar.”

Vanilla pancakes, scratch-made biscuits and gravy, and breakfast hash made from bacon ends instead of corned beef are surely standouts. But the star of the menu is still the steak.

“We dry-age our steaks in-house so we’re able to o er them at a price point where a 20-ounce ribeye will cost you $45. If you order that same steak in some locations in Columbus, you’re going to pay at least $170,” explained Toles. “American Wagyu is also hard to find at our prices. We work with farms like ours to meet our demand, so we don’t really have a middleman.”

As tempting as every confection is on the bakery side, the butcher shop offers an equally enticing case for carnivores. From at irons and lets to short ribs and sliders, all the way up to a whole Wagyu brisket for $158. Those stocking up for a backyard soiree will find plenty of entry-level options as well, from those same hand-pressed patties to buck- a-brat specials.

“We don’t raise chickens here, but we work with four local farms because every chicken tastes different and we only want the best,” he revealed, preferring to feature local purveyors and products that make more sense to source instead. “We can’t supply everything ourselves, so we find folks who do it better than we could. Quality determines our partnerships, not price.”

The livestock and crops aren’t the only offerings from Blystone Farm that are organic. So is the marketing—limited to word of mouth, Facebook posts with preparation suggestions from their butcher shop, and Hank, one of their cattle dogs, whose popular pic wearing a cowboy hat earned him his own Instagram account.

Asked about the exact inspiration of each expansion, Toles explained it was the butcher shop that unexpectedly led to the taproom, then the restaurant, because customers wanted to stay, sit out on the patio, and have a beer and a bite to eat.

“Our taps are more seasonal. Right now, we have a lot of pilsners and goses, but during the cooler months Jane features more porters and stouts,” he noted. “Exclusivity also brings folks in. Kinda Fuzzy by Jackie O’s is kind of hard to get in this market, 3 Floyds is rare to find and we feature them regularly.”

One of the first events Toles undertook was a beer dinner in collaboration with Jackie O’s. The event sold out and everyone raved about it. Joe told Toles, “We should really do more of this. We’re pretty good at it.” Not long after, Toles pulled into work one day and noticed Joe clearing ground, so he walked up and asked what was going on.

“ ‘I’m building an event center,’ said Joe. It was that simple,” Toles recalled. “Joe built it personally in less than a year. He had some help with the brick and the electrical, but other than that, it was all him. The design, the details, down to the staining of the concrete.”

The Barn, a nearly 4,000 square-foot event space, is key to their expanding scope. A petting zoo is in the works and fundraising for the new Blystone Agricultural Community is underway, a nonprofit with an emphasis on education and experiences for future farmers. “Beards & Brews” and a “Wagyu Cookout” are already scheduled for this summer to get the program started.

“Columbus is urban, and Canal Winchester is definitely growing. But we’re still a farming community,” Toles explained. “Joe wants to encourage the next generation of family farms by giving city kids who may not consider farming the opportunity to raise livestock. We have almost a hundred acres out here. If I know one thing for certain, as long as Joe has land and can keep building, Blystone is going to keep growing.”